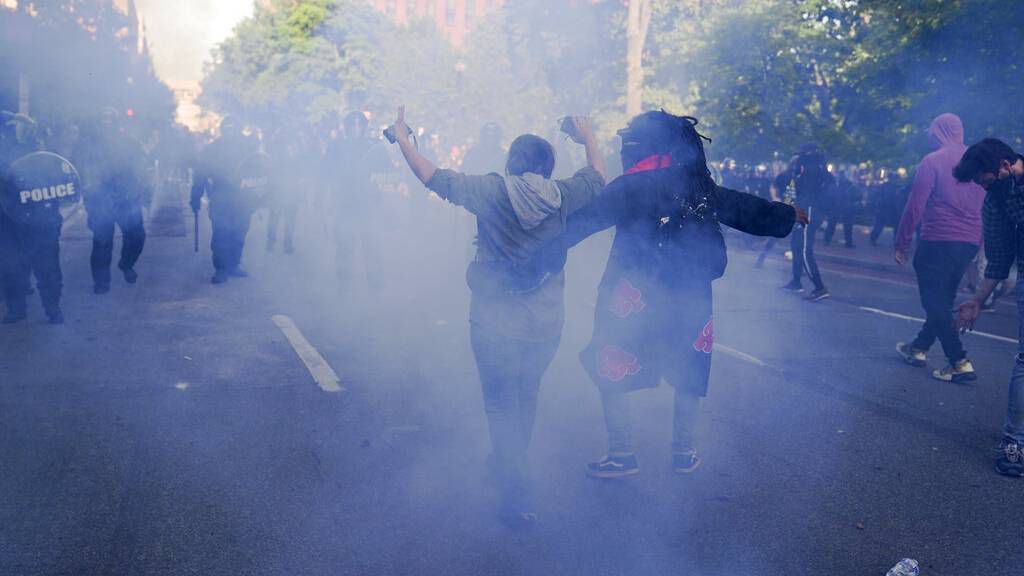 WASHINGTON (AP) — A military whistleblower says federal officials sought some unusual crowd control devices — including one that’s been called a “heat ray” — to deal with protesters outside the White House on the June day that law enforcement forcibly cleared Lafayette Square.

DeMarco said he responded that the Guard was not in possession of either device. National Public Radio and The Washington Post first reported DeMarco’s testimony.

Use of either the acoustic device or the Active Denial System would have been a significant escalation of crowd control for the Guard members, particularly since the Defense officials ordered that the Guard troops not be armed when they went into D.C.

Law enforcement personnel were armed. And although active-duty military troops were sent to the region, they remained at bases outside the District in case they were needed but never actually entered the District.

The Active Denial System was developed by the military nearly two decades ago, and was unveiled to the public around 2007. It’s not clear that it’s ever actually been used in combat, although there are reports it has been deployed.

The system, which emits a directed beam of energy that causes a burning heat sensation, was considered a non-lethal way to control crowds, particularly when it may be difficult to tell the enemy from innocent civilians in war zones. Use of the device appeared to stall amid questions about whether it actually caused more serious injuries or burns than initially thought.

The Long Range Acoustic Device, also called a sound cannon, sends out loud messages or sounds and has been used by law enforcement to disperse crowds. The U.S. military has, in recent years, ordered the LRAD for the Navy’s Military Sealift Command to be used by ships to hail or warn other vessels.

DeMarco testified in late July before the House Natural Resources Committee, which is investigating the use of force against crowds in Lafayette Square that night. His remarks on the crowd control devices came in response to follow-up questions from the committee. DeMarco’s lawyer sent his answers to the committee on Aug. 28; NPR posted the document online Wednesday.

The Trump administration has said that vicious attacks by protesters led federal forces to turn on what appeared to be a largely peaceful crowd June 1 in the square in front of the White House. Law enforcement and security officers that night clubbed and punched protesters and unleashed mounted officers and chemical agents against them in one of the most controversial confrontations at the height of this year’s nationwide protests over the killing of Black people at the hands of police.

The forceful clearing of Lafayette Square, long one of the nation’s most prominent venues for demonstrations, came minutes before President Donald Trump appeared in the area, on his way to stage a photo event in front of a historic church nearby.