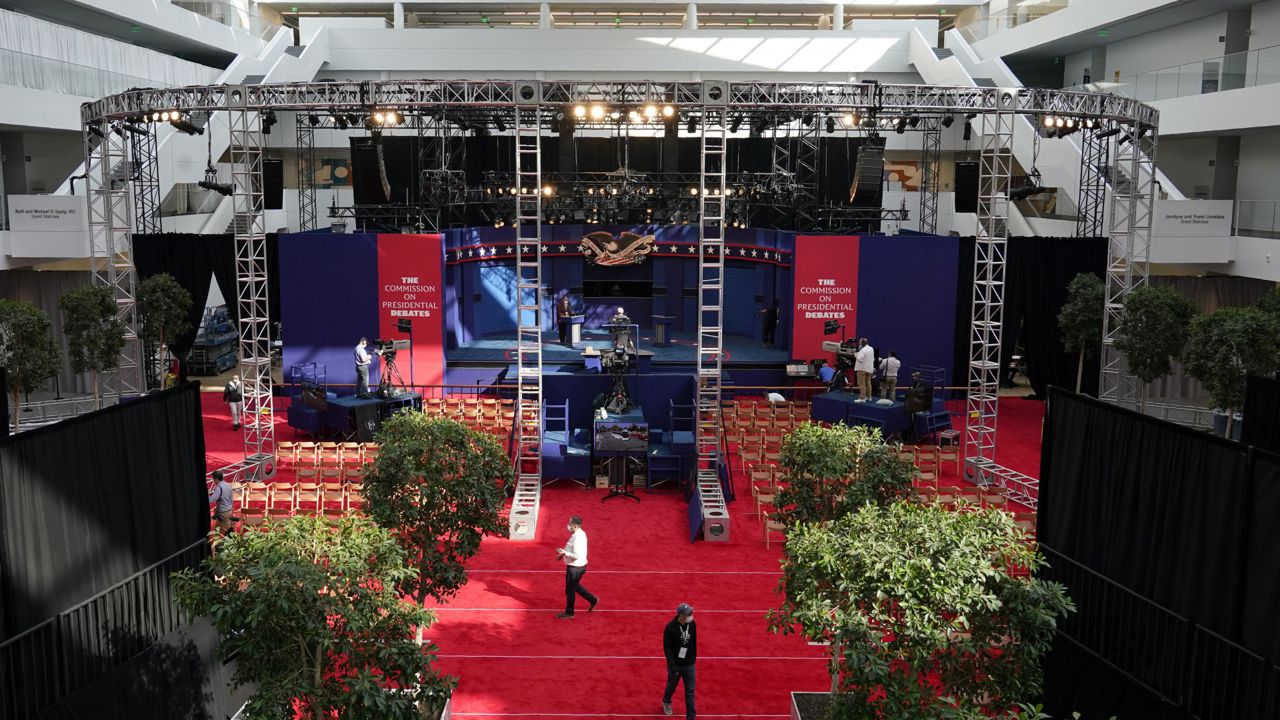 CLEVELAND — Donald Trump and Joe Biden will square off Tuesday night in their first presidential debate, a matchup with the potential to change the race’s trajectory.

The focus will be on the president’s influence on the Supreme Court, his handling of the Coronavirus pandemic, and the bombshell news report detailing his years of tax avoidance.

Tuesday’s face-off, the first of three debates between Trump and Biden, will take place at Case Western Reserve University in Cleveland and will be moderated by Fox News host Chris Wallace.

Biden’s response was succinct Sunday when asked how he planned to win against Trump: “Just tell the truth.”

The president, meanwhile, has for weeks portrayed Biden as lacking in mental acuity.

Trump’s lowering of expectations for the former vice president could well backfire. More recently, Trump insisted that his opponent be drug-tested, indicating without evidence that he believes any strong showing by Biden will be the result of a performance-enhancer.

“Joe Biden just announced that he will not agree to a Drug Test. Gee, I wonder why?” Trump tweeted Monday.

At the debate, Trump will be on the defensive after a New York Times report revealed his substantial financial losses as a businessman and showed he paid just $750 in federal income taxes in 2016 and 2017 and nothing at all in other years.

“I paid many millions of dollars in taxes but was entitled, like everyone else, to depreciation & tax credits,” he tweeted Monday.

But Trump has resisted releasing his tax returns as has been practice for presidential candidates throughout modern history.

The Biden campaign seized on the Times’ findings as further evidence that the president doesn’t understand the struggles of everyday Americans.

It quickly released a digital ad showing the thousands of dollars in annual tax burdens of teachers, firefighters and nurses as a contrast to the $750 in payments now associated with Trump.

Biden has sought to push a Scranton versus Park Avenue narrative in which Biden has working-class credentials while Trump is elite and out of touch.

The makeup of the Supreme Court will be another major topic Tuesday.

Barrett is Trump’s third appointee to the high court and the president’s stacking of the federal bench in his first term has been a selling point to conservative voters.

If confirmed, Barrett would weight the Supreme Court with conservatives six-to-three and Trump’s nominees could influence key decisions for a generation.

Biden stressed that her addition to the Supreme Court would threaten American health care, particularly protections on pre-existing conditions.

The Supreme Court is set to hear a case on the Affordable Care Act just after Election Day.

As other Democrats have, Biden at the debate is expected to take issue with the Senate Republicans’ ramming through of a Supreme Court confirmation in an election year.

Biden and others in his party have portrayed Republicans as hypocrites because in 2016, they blocked President Barack Obama’s Supreme Court nominee, saying Merrick Garland was appointed too soon before an election.

Ginsburg’s death and the subsequent Supreme Court vacancy and the Times’ report on Trump’s tax history come against the backdrop of a Coronavirus pandemic still raging across the country.

The country has seen more than 205,000 deaths linked to the virus — a figure Trump avoids acknowledging publicly.

The inextricably linked public health and economic crises show few signs of abating, though Trump has promised a safe and effective vaccine would come soon.

Public polls show flagging confidence in a rushed vaccine and Biden and his running mate, Kamala Harris, said they trust science but not Trump.

On the eve of the debate, Trump held a White House news conference on COVID-19 testing.

He announced his administration would distribute 150 million rapid diagnostic tests around the country.

Biden has linked the country’s struggles with controlling the spread to what he says is Trump’s failure of leadership.

In his Democratic National Convention speech, the former vice president said part of his plan would be to impose a national mask mandate.

He criticized Trump for not modeling mitigation measures as the president continues to hold massive campaign rallies where attendees aren’t socially distanced and largely do not wear face masks.

Trump has repeatedly mocked Biden for wearing a face mask.

The debate is also expected to focus on other topics: “The Trump and Biden Records,” “The Economy,” “Race and Violence in our Cities” and “The Integrity of the Election.”

Tuesday’s showdown, where Trump and Biden will be at podiums and will not wear masks, will additionally be a study in style.

Biden is not known as a skilled debater while Trump claims he is not doing any formal preparation.

During the Democratic primaries, Biden often stopped mid-sentence or cut himself off before his time was up. And he failed to quickly defend himself against attacks lobbed by opponents.

During his 2016 debates against Hillary Clinton Trump frequently interrupted her and in one case, where both candidates were able to roam the stage, physically looming behind her.

The president and his allies have honed in on Biden’s son, Hunter, for overseas business dealings that presented conflicts of interest during Biden’s time as vice president to Obama.

Trump may seek to catch Biden off-guard by insulting his family members.

As Trump and Biden take the stage, the election season is already well underway with early voting has begun and mail-in ballots have been sent out.