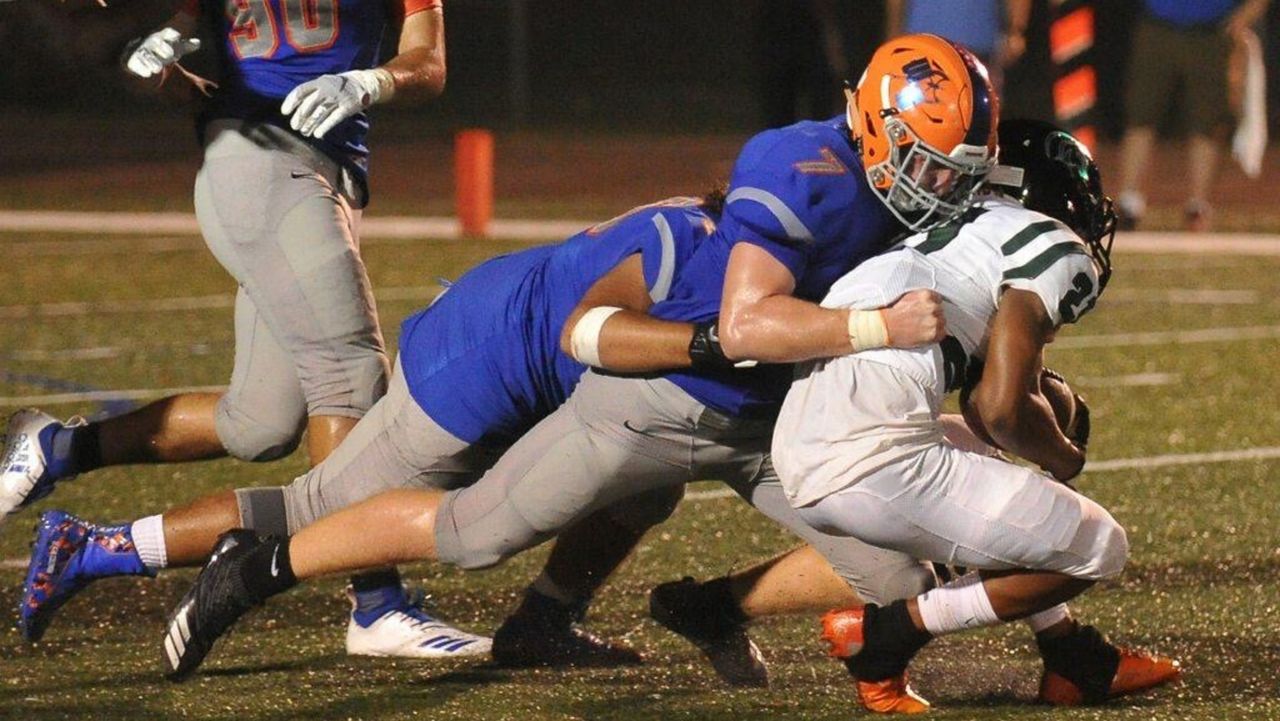 GAINESVILLE, Fla. —  It was decision day for the Florida High School Athletic Association regarding fall sports, and the Board of Directors voted 11-5 in favor of starting the season on August 24.

The FHSAA met Friday to discuss the coronavirus pandemic and the viability of starting the fall sports seasons, including football, as planned. The board included a clause in its decision to allow schools to opt out of competing by September 18.

For some, including West Orange linebacker Tyson Schwalbach, this fall isn’t just about playing one more time with their friends. It’s determines whether they will go to college.

Schwalbach has been known to deliver hits since the third grade. “My whole life, I have been playing football to try and get to Division I or II [football],” the senior said.

In 2020, he has been the one taking the hits because of the coronavirus pandemic, missing numerous opportunities to impress schools for the chance to earn a scholarship.

“Before the spring football, we were supposed to talk to all the colleges that were interested in me, to come out and watch my spring game,” Schwalbach explained. “Coaches were going to watch me work out and stuff, and we didn’t have it because of COVID.”

For 🏈 players like @SchwalbachTyson, a missed season could have meant his chance to go to college. The decision to play in the fall is different for many, because you may also not realize what he lost in the spring. @MyNews13 #N13Covid19 Today the @FHSAA approved fall sports. pic.twitter.com/59uLRq21uH

The virus even sacked his father for a little more than a week, but Eric Schwalbach doesn’t want it to be the reason his son can’t play.

“I want him to play,” Eric said. “When I look at the risk on a football field, the risks are inherent already.”

How many parents can relate? Hoping your child earns a college scholarship, or seeing them go straight in to the workforce. @MyNews13 #N13Covid19 pic.twitter.com/0TfuoApk5A

Tyson broke a wrist in the seventh grade, and split his head open in the ninth grade. Neither of those injuries deterred him from trying to earn his way in to college.

“Just trying to get college paid,” Tyson said. “I don’t have to put stress on them [family, like with retirement and stuff.”

When his father attended high school, he also was on the West Orange football team. Eric also relied on his senior year to earn a scholarship to make his way to college and sees the same determination from his son.

“So his entire life, since 3rd grade for eight years, he has been trying to go play college football,” Eric said. “For love of the game and financially, ‘I can go do this.’ ”

Friday, Tyson took one step closer to having a shot at reaching his goal because a season now looks like it will kick off.

Football is not the only sport affected. The FHSAA fall sports schedule includes football, cross country, golf, swimming and diving, and volleyball.

The board discussed three options for fall sports.

The approved option is to start fall sports’ practice as planned on August 24, which Florida Governor Ron DeSantis has said he also supports.

The other options involved delays until October and/or November.

Speakers at the meeting expressed a variety of concerns, including state coronavirus numbers geographically, testing, and procedures in the event of outbreaks.

The board also discussed the impact high school sports has on not only students but school districts, too. They could potentially lose a lot of money if games are played without fans and students.

Seniors like Schwalbach, in all sports, could lose important scholarship opportunities if they’re not able to take advantage of their time to shine for college recruiters.

We FINALLY have a start date. The Board has voted to start Fall Sports on Aug. 24 with the option to opt out of the state series by Sept. 18. The motion passed by a vote of 11-5. #FHSAA @BN9 @MyNews13

0 0 0 0
Previous : New ordinance could create apprenticeship requirement for companies looking to do business with City of Tampa
Next : Clearwater Marine Aquarium Offers After School Programs for Kids