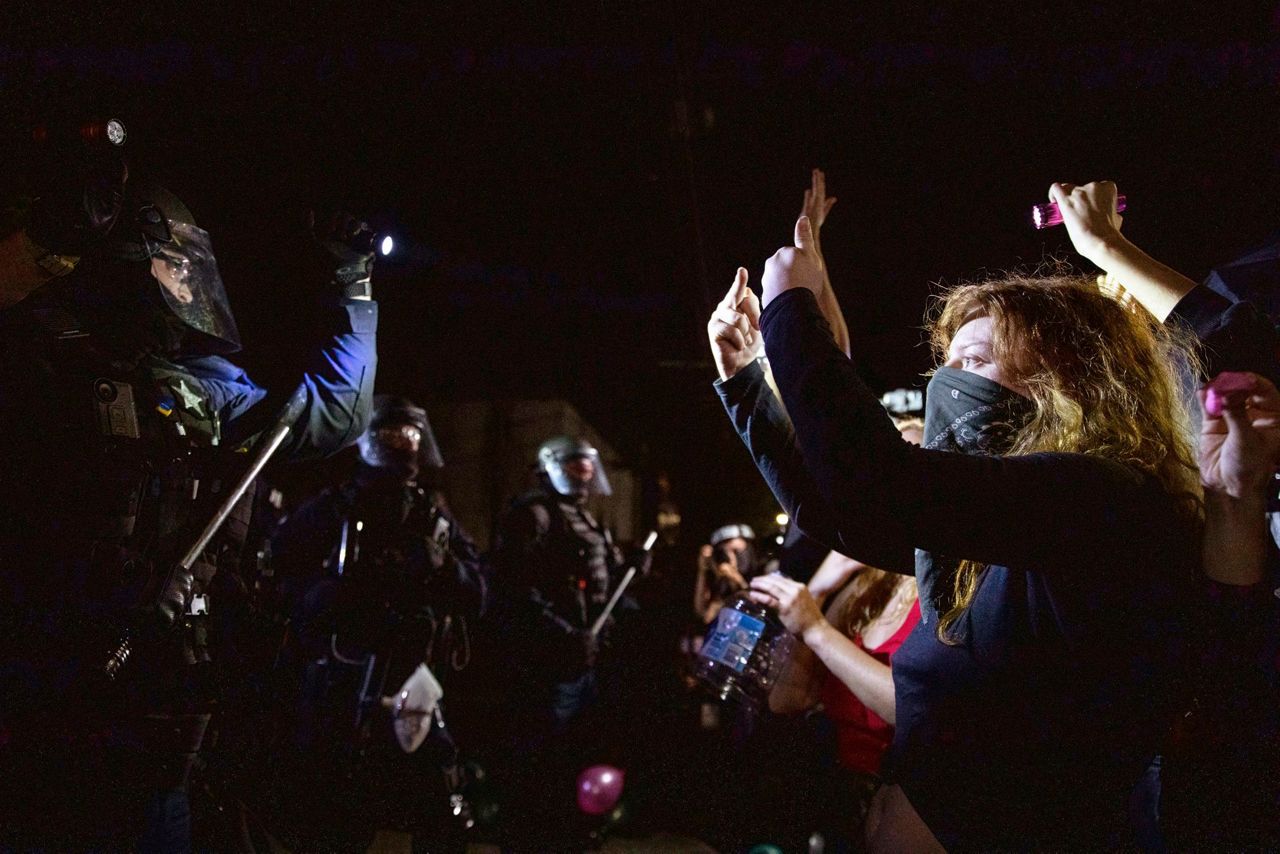 Protesters, most wearing black, gathered around sunset Saturday at a grassy park in the city. Wooden shields were placed on the grass for protesters to use as protection.

Demonstrations in Portland started in late May after the police killing of George Floyd in Minneapolis. During the clashes, some have broken windows, set small fires and pelted police with rocks and frozen water bottles.

On the 100th day of protests in Portland, demonstrators vowed to keep coming into the streets.

Tupac Leahy, a 23-year-old Black man from Portland, said he had probably been out to protests for about 70 of the 100 days of demonstrations.

Leahy said he wanted to see a significant reduction to the local police budget, with the money directed to other community needs. He said the demonstrations would continue for some time.

“I think it’s going to keep going on until the election,” Leahy said. “I don’t see it slowing down.”

Chelsea Jordan, 30, of Portland, said: “I feel the people here have a lot of heart and a lot of commitment.”

Jordan was helping spray yellow paint on cutouts to mark the names of Black people killed by police.

“I want to keep at it until the full abandonment of the police, so I think it’s going to be a long fight,” she said

Earlier Saturday, hundreds of people gathered in a park just north of Portland in Vancouver, Washington, for a memorial service for Aaron “Jay” Danielson, a supporter of a right-wing group called Patriot Prayer, who was killed Aug. 29. The suspect was himself shot and killed by police Thursday.

Families showed up at the event with their kids, lining up for the free BBQ and picnicking on the grass at Esther Short Park. As various speakers addressed the audience on stage, attendees waved their flags enthusiastically, occasionally breaking out into chants of “U-S-A!”

Many of the crowd were President Donald Trump supporters, wearing MAGA hats and shirts or holding Trump-Pence flags. Some also waved flags and wore T-shirts showing support for the police.

The crowded regularly erupted in boos with any mention of Portland Mayor Ted Wheeler and Oregon Gov. Kate Brown, whom Patriot Prayer founder Joey Gibson demanded apologize to Danielson’s family because they felt he had been unfairly portrayed.

“This is about truth and lies,” Gibson said. “Jay was not a white supremacist.”

The documents included shots of security footage that showed the suspect, Michael Forest Reinoehl, ducked into a parking garage and reached toward a pocket or pouch at his waist before emerging to follow the victim. Danielson was holding bear spray and an expandable baton and had a loaded Glock handgun in a holster at his waist, according to the documents.

Witnesses told police that just before they heard gunshots someone said something like, “wanna go,” which is frequently a challenge to a fight. Danielson, 39, was shot in the chest and died at the scene.

The court documents were filed to support second-degree murder charges against Reinoehl, who was a supporter of antifa — shorthand for anti-fascists and an umbrella description for far-left-leaning militant groups.

Copyright 2020 The Associated Press. All rights reserved. This material may not be published, broadcast, rewritten or redistributed without permission.