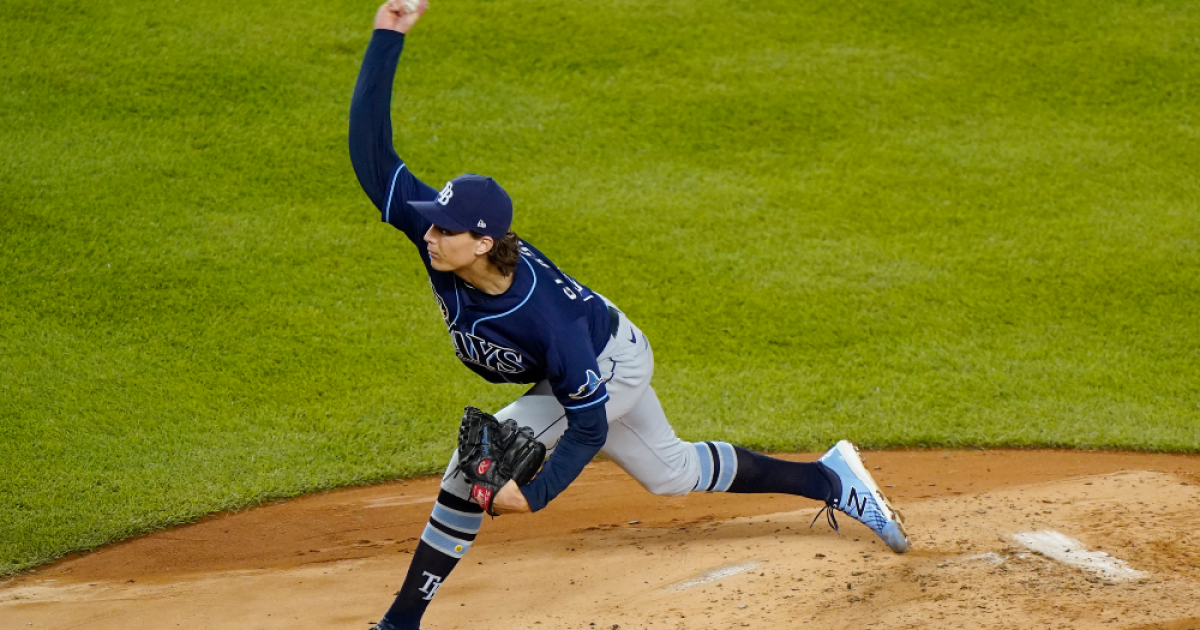 “We’ve had some really good battles over the years and they’ve always kicked our butts here at their place,” Rays veteran Kevin Kiermiaer said. “We’ve flipped the script here for 2020.”

Tyler Glasnow flummoxed the Yankees for six innings, Ji-Man Choi and Kiermaier homered off Gerrit Cole, and the Rays extended their mastery of New York with a 5-3 victory Monday night.

The AL East leaders improved to 7-1 against the Yankees this season and stretched their division cushion to 4 1/2 games. The clubs are set to complete their season series this week, and Tampa Bay could skip town as runaway favorites for its first division title since 2010.

“We want to make it nine of 10 leaving here in a couple days,” Kiermaier said.

New York had won three straight since snapping a seven-game skid but crumbled early with Cole, its $324 million ace, on the mound.

The 6-foot-8 Glasnow (2-1) had a no-hitter through five and completed six innings of scoreless, two-hit ball. He struck out nine and walked one while working almost entirely with two pitches — a fastball averaging 97 mph and a plunging curveball.

“He had it all going,” Rays manager Kevin Cash said.

Glasnow lost his no-hit bid via replay review. With one out in the sixth, DJ LeMahieu hit a grounder that shortstop Willy Adames fielded deep in the hole. First base umpire Roberto Ortiz ruled Adames’ throw beat LeMahieu, but that was quickly overturned.

“I mean, he was safe, honestly,” Glasnow said with a smile.

A day after erasing a five-run deficit against the Mets when they were down to their final out, the Yankees crept back against the Rays but couldn’t complete the rally.

Gio Urshela hit a solo homer off Edgar García in the seventh, and Luke Voit added his eighth homer in 12 games, a two-run shot off García in the eighth that made it 5-3. Voit has 13 homers this season, tying for the major league lead.

New York had the potential tying run at bat with one out in the eighth, but Urshela struck out and Mike Tauchman popped up against Peter Fairbanks. Diego Castillo stranded a runner in the ninth for his third save.

Cole (4-2) labored through five innings, allowing four runs, eight hits and four walks. He struck out seven — ending a six-game streak against Tampa Bay with double-digit strikeouts — and had a runner reach at least second base in each inning.

“I thought he competed well for having a lot of traffic and kind of managed his way through it,” Yankees manager Aaron Boone said.

Cole has allowed 12 home runs this season, matching Ross Stripling for most in the majors.

Cole said hitters are ambushing pitches when he comes over the plate and thought a variety of factors could be at play — falling behind in counts, tipping pitches or just plain bad luck.

“I haven’t really put my thumb on it,” he said. “But I’m certainly aware of it and certainly trying to get ahead of it.”

Choi and Adames had three hits apiece, and Choi also walked twice. Choi was pulled late in the game with an upset stomach.

Two of Choi’s three home runs this season have come against Cole, and he’s 9 for 15 with three homers in his career against last year’s AL Cy Young Award runner-up.

“I don’t understand how anybody hits Gerrit Cole, to be honest with you,” Cash said. “Ji-Man has had some good at-bats against him. Looks like he’s gotten into counts and done some damage on a pitch he’s looking for here and there.”

Venezuelan right-hander Miguel Yajure made his major league debut for the Yankees and pitched three scoreless innings. He’s the first player to appear in a game wearing No. 89, the last number between 0-99 that hadn’t been worn in the big leagues.

Rays: 3B Yandy Díaz was pulled with left hamstring tightness in the fifth and is day to day. … OF Austin Meadows was held out of the lineup for the second straight day with side soreness. Cash said Meadows might be available to pinch hit and shouldn’t miss an extended period. … RHP Charlie Morton (right shoulder inflammation) will come off the injured list and start Wednesday against the Yankees. … LHP Cody Reed was activated after being acquired from Cincinnati on Friday. LHP Anthony Banda was designated for assignment and traded to the Giants for cash.

Yankees: C Gary Sánchez was hit in the right hand by a foul ball in the fifth inning but stayed in the game. … OF Aaron Hicks was available a day after leaving a game with calf cramps but wasn’t in the starting lineup. He pinch hit in the ninth and singled. … LHP Zack Britton (strained left hamstring) threw a bullpen Sunday and is expected to return in the next few days. … C Kyle Higashioka (right oblique strain) could be activated Tuesday.