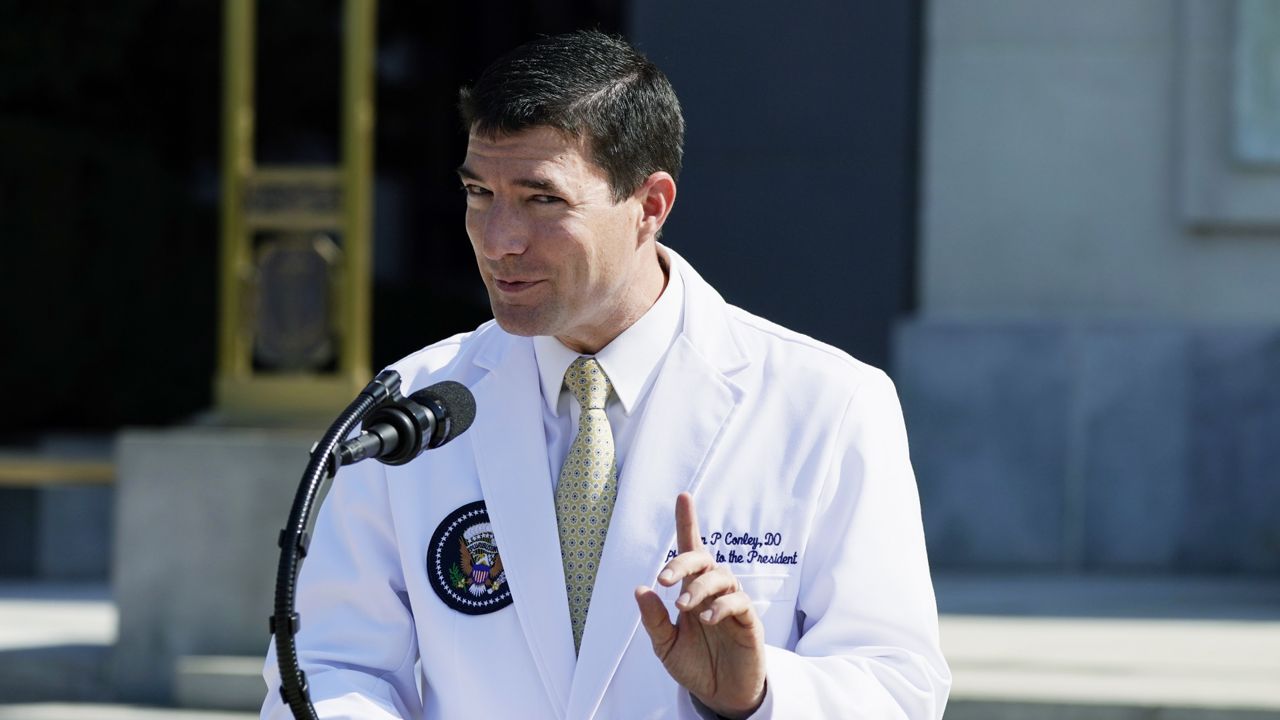 BETHESDA, Md. — While President Donald Trump’s physician said Sunday that the president has “continued to improve” since being admitted to Walter Reed medical center on Friday, many who listened to the latest update were more concerned with what the president’s medical team did not say.

“Since we spoke last, the president has continued to improve. As with any illness, there are frequent ups and downs over the course,” Dr. Sean Conley told reporters outside the hospital on Sunday. “Particularly when a patient is being so closely watched 24 hours a day.”

Conley said that over the course of Trump’s illness, the president has experienced two transient drops in his oxygen levels, dropping below 94%. The second one came Saturday morning, he said.

The president received a dose of oxygen at the White House on Friday, Conley said, despite being “adamant that he didn’t need the extra oxygen.”

When asked if the president received another supplemental dose of oxygen on Saturday, Conley responded that he wasn’t sure — the only dose Conley personally ordered was on Friday, but said he would have to check with the president’s nursing team to see if any additional oxygen was administered yesterday.

The day before, Conley refused to clarify whether the president had ever received supplemental oxygen, saying only: “Thursday, no oxygen. None at this moment. And yesterday with the team, while we were all here, he was not on oxygen.”

When asked why he would not answer questions about the president’s supplemental oxygen the day before, Conley said: “I was trying to reflect the upbeat attitude” of the team and the president.

“It came off that we were trying to hide something, which wasn’t necessarily true,” he added.

Doctors even gave conflicting statements within Sunday’s ten-minute meeting. Dr. Sean Dooley, a pulmonologist at Walter Reed, said the president has been without fever since Friday.

Minutes earlier, Dr. Conley stated that the president had a “high fever” on Friday morning.

And while the president’s team stated there were “expected” findings with Trump’s lungs, qualifying that there’s “nothing of major clinical concern,” Conley would not answer shouted questions asking him to clarify exactly what those findings were.

In response to transient low oxygen levels, the president is now on a treatment of dexamethasone, Dr. Conley said Sunday. The team will continue to monitor the president’s status, but doctors said they were hoping to be able to discharge the president as early as Monday, should his condition maintain or improve over the next 24 hours.

Moreover, the president’s health represents a national security issue of paramount importance not only to the functions of the U.S. government but to countries around the world, friendly and otherwise.

To that end, Trump will join National Security Adviser Robert O’Brien, as well as Secretary of State Mike Pompeo and Chairman of the Joint Chiefs of Staff Mark Milley, for a remote national security briefing later today. The president will participate in the discussion via video chat, with the advisers at the White House, O’Brien told Margaret Brennan on CBS’ Face The Nation.

0 0 0 0
Previous : Live Updates: Doctor Says Trump Could Be Discharged From Hospital As Early As Monday
Next : Cineworld May Close US and UK Theaters After Bond Film Delay