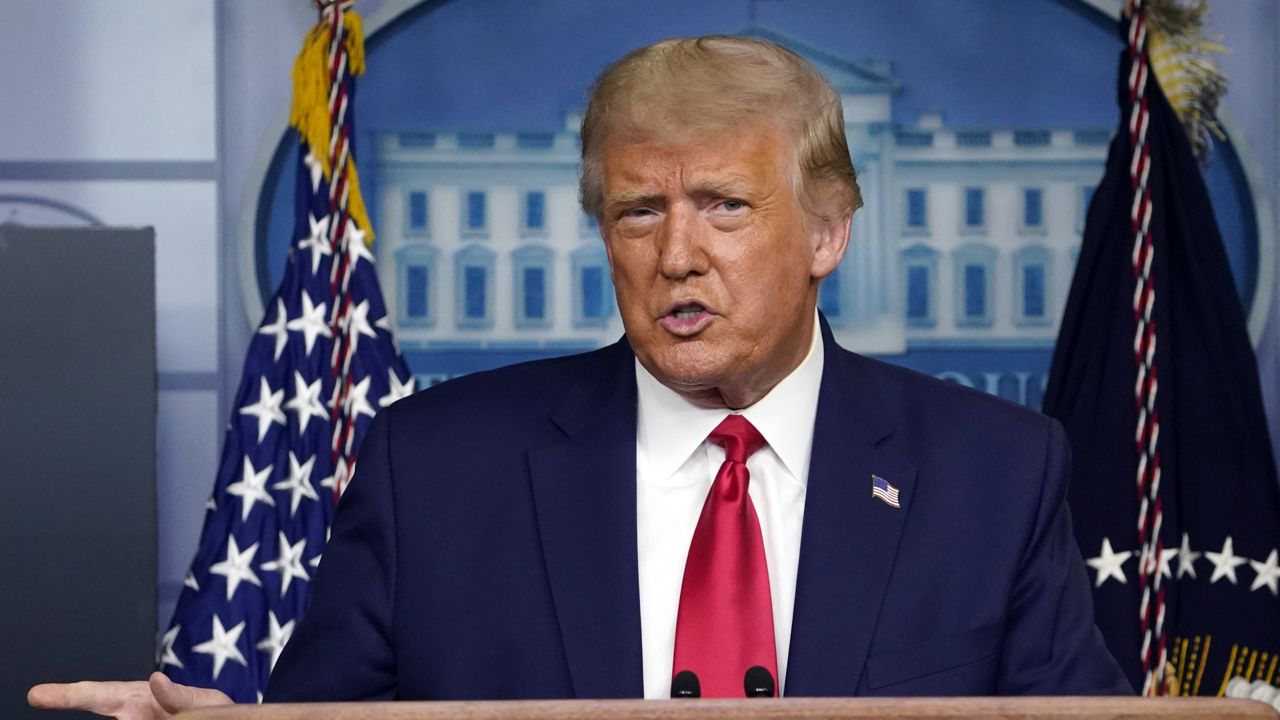 WASHINGTON, D.C. — President Trump doubled down on his claims that a coronavirus vaccine will be ready within the coming months despite warnings from health officials to the contrary.

“We’re on track to deliver and distribute the vaccine in a very safe and effective manner. We think we can start sometime in October. So as soon as it’s announced we’ll be able to start,” the president said during a White House briefing on Wednesday.

Early in the day, the Trump administration outlined a sweeping plan to make vaccines for COVID-19 available for free to all Americans, assuming a safe and effective shot is developed.

In a report to Congress and an accompanying “playbook” for states and localities, federal health agencies and the Defense Department sketched out complex plans for a vaccination campaign to begin gradually in January or even late this year, eventually ramping up to reach any American who wants a shot. The Pentagon would be involved with the distribution of vaccines, but civilian health workers would be the ones giving shots.

The president’s timeline contradicts one given by the director of the CDC, Dr. Robert Redfield, just hours before.

While testifying in front of the Senate Appropriations Committee on Wednesday, Redfield made clear to Congress that any version of a vaccine available this year would be in “very limited supply.” The shot wouldn’t be broadly available to most of the U.S. population until the summer of 2021, he estimated.

“I think he made a mistake when he said that. It’s just incorrect information,” President Trump said of Redfield’s timeline. “I think he misunderstood the question.”

Trump also contradicted a message from the CDC director about the effectiveness of masks, saying a mask is “not more effective than a vaccine.”

Earlier, Redfield told Congress that masks may be “more guaranteed to protect me against COVID than when I take a COVID vaccine.”

The president also said that Joe Biden is “recklessly endangering lives” with his “anti-vaccine” rhetoric, claiming that his opponent only called the timing of the potential vaccine into question to curry political favor.

Both Biden and Trump have blasted the opposing campaign’s proposals to handle the coronavirus pandemic.

Biden has frequently called into question whether the president pressured federal health agencies to rush a vaccine ahead of the November election in order to boost his odds at the polls.

“Let me be clear: I trust vaccines, I trust scientists, but I don’t trust Donald Trump, and at this moment, the American people can’t, either,” Biden said during an address on Wednesday.

“Scientific breakthroughs don’t care about calendars any more than the virus does. They certainly don’t adhere to election cycles. And their timing, their approval, and their distribution should never, ever be distorted by political considerations,” Biden added.

But officials deny that the government’s timeline for states to be ready for a vaccine by Nov. 1 was politically motivated.

Redfield told the Senate Appropriations Committee that the “scientific integrity” of his agency’s output “has not been compromised, and it will not be compromised under my watch.”