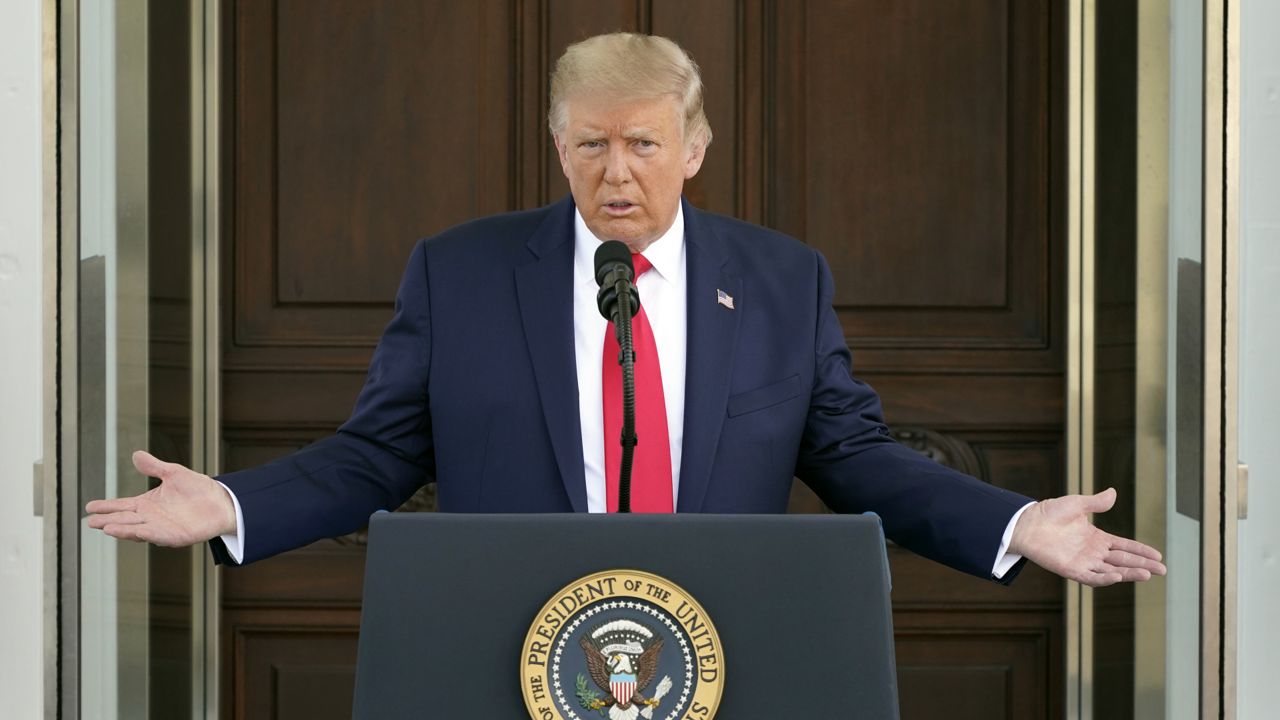 WASHINGTON, D.C. — President Trump used his briefing from the White House on Monday, originally billed as a Labor Day address, as a tour de force to attack his political opponents.

The President took aim at his opponent Joe Biden and running mate Kamala Harris, who he painted as “socialist” and “the most liberal person in congress,” respectively.

While Harris was named “most liberal compared to all Senators” of 2019 by GovTrack, a non-partisan organization that tracks bills in Congress, GovTrack’s founder told The Sacramento Bee that their analysis is “at odds” with her pre-Congress positions.

“It remains to be seen which part of her career – her actions as a district attorney and Attorney General or her policy proposals in Congress – would be reflected greater in a Biden administration,” GovTrack founder Josh Tauberer told the Bee.

Trump slammed Biden’s plan on dealing with the coronavirus pandemic, claiming that Biden and Harris are undermining science when they criticize his administration’s plan to produce a vaccine in a short time span.

“Under my leadership we will produce a vaccine in record time. Biden and his liberal running mate, the most liberal person in congress by the way, not a competent person in my opinion, would destroy this country and would destroy this economy, should immediately apologise for the reckless anti-vaccine rhetoric that they are talking right now. They’re talking about endangering lives and it undermines science,” Trump said.

Earlier this month, The Centers for Disease Control and Prevention notified health officials in all 50 states and five large cities last week to prepare to distribute a coronavirus vaccine by late October or early November.

While many Americans are eagerly awaiting a vaccine for the virus that has killed more than 184,000 people in the country and over 858,000 people worldwide, the quick timeline is likely to stoke fears by some that the Trump administration is rushing out a vaccine for political reasons. Election Day is Nov. 3.

Sticking with the theme of the election, President Trump mentioned that the democrats would seek to win by sending “unsolicited ballots” to people across the country.

Trump frequently espouses the dangers of mail-in voting as easily tamperible, which experts widely agree there is little to no evidence to support.

Just last week, the President seemed to urge his followers to vote more than once in the upcoming election in order to ensure their votes are counted, dubbing the increase in mail-in ballots due to the coronavirus pandemic the “unsolicited ballot scam.”

“If you get the unsolicited ballots, send it in and then go — make sure it’s counted. And if it doesn’t tabulate, you vote. You just vote. And then if they tabulate it very late, which they shouldn’t be doing, they’ll see you voted, and so it won’t count. So, send it in early, and then go and vote. And if it’s not tabulated — you vote. And the vote is going to count,” Trump said at a September 2 appearance in North Carolina.

Trump also doubled down on his claims that he never disparaged deceased military members as “losers” and “suckers,” as was first reported by The Atlantic.

“Only an animal would say a thing like that. There’s nobody that has more respect for not only our military, but the people that gave their lives in the military,” Trump said.

The article alleged Trump made the comments as he begged off visiting the cemetery outside Paris during a meeting following his presidential daily briefing on the morning of Nov. 10, 2018.

Staffers from the National Security Council and the Secret Service told Trump that rainy weather made helicopter travel to the cemetery risky, but they could drive there. Trump responded by saying he didn’t want to visit the cemetery because it was “filled with losers,” the official said, speaking on condition of anonymity because the official was not authorized to discuss it publicly.

In Monday’s press conference, the president reiterated the White House’s position that the cancelled visit was simply due to poor weather.

The report has been confirmed in part by multiple news outlets, including CNN, the Associated Press, and Fox News. The Atlantic stands by their reporting.

Trump also espoused false claims that former president Barack Obama and former Vice President Joe Biden spied on his campaign during the 2016 presidential election. The president has brought up this conspiracy theory in the past, most recently in a Twitter post while Obama was speaking at the Democratic National Convention in August.

HE SPIED ON MY CAMPAIGN, AND GOT CAUGHT!

Trump suggested in Monday’s press conference that Obama and Biden should spend 50 years in prison for treason: “If this were the opposite way … they would’ve been in jail already.”

This claim has been proven false numerous times.

While neither Biden nor Harris have responded directly to Trump’s claims, the two have a packed Labor Day of campaign visits scheduled.

Biden, meanwhile, was collecting a trio of endorsements from organized labor as he headed to Harrisburg, Pennsylvania, for an AFL-CIO virtual town hall with union President Richard Trumka.

Meeting first with local labor leaders in the backyard of a supporter’s home in Lancaster, Pennsylvania, Biden spoke about trade, coronavirus and the economy as he criticized Trump for “refusing to deal with the problems that affect ordinary people” and called for strengthening unions.