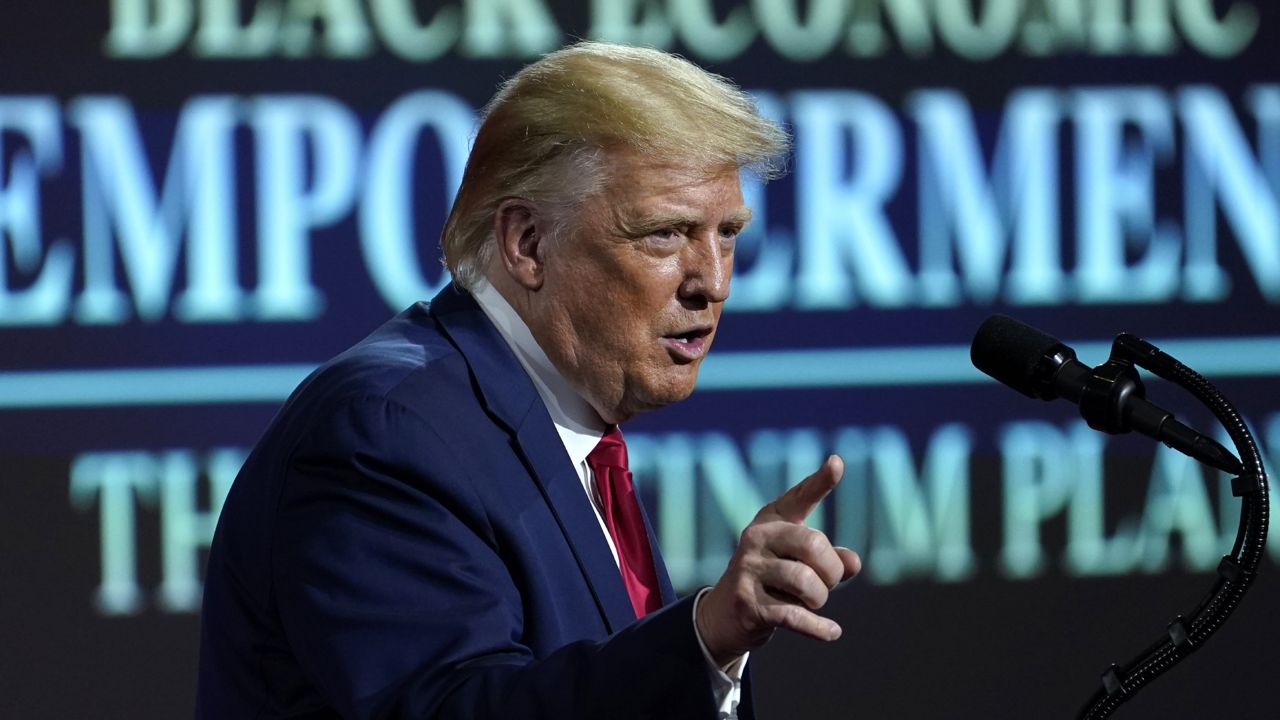 ATLANTA — President Trump rolled out his so-called “Platinum Plan” for Black economic empowerment to entice voters during a speech in Georgia on Friday.

The proposed plan aims to “increase access to capital in black communities by almost $500 billion,” according to a government press release. The proposal includes “diversity training” for law enforcement, increased access to grants for businesses supporting Black entrepreneurs, as well as a proposal to make Juneteenth a federal holiday.

“Our movement is welcoming millions of Black Americans back into the Republican Party, the party of Frederick Douglass and Abraham Lincoln,” Trump told supporters at Atlanta’s Cobb Galleria, later adding: “If you vote Republican, over the next four years we will create 3 million new jobs for the Black community.”

Trump touted the state of the economy during his speech, saying: “Before the China Virus, we built the greatest economy for Black Americans in history – and we are doing it again!”

The economy is a frequent talking point for the president in many of his rallies, regardless of the demographics of those in his audience.

During his speech, the president said he created the “greatest economy for African Americans in the history of our country,” citing low unemployment numbers and a recent increase in Black home ownership. Trump claimed his opponent, former Vice President Joe Biden, cares more about foreign citizens than Black Americans, saying he continuously “shipped your jobs overseas.”

It was a similar pitch Trump made to Michigan voters last week, where he said he brought jobs to the state and would continue to do so during his second term as president.

While there have been car factories such as the Fiat Chrysler Automobiles plant built in Michigan during Trump’s time in office, the president has had little to nothing to do with their planned construction, according to a 2019 Factcheck report. The president did not specify which factories he was referring to.

Also on Friday, the president slammed Biden and Democrats as a whole, saying they “have taken the Black voter for granted.” The president brought up the controversial 1994 tough-on-crime bill authored by Biden during his tenure in the Senate, saying the bill created “devastating disparities” on the amount of incarcerated Black people in the United States.

Biden has defended the bill as recently as 2016, saying it did a lot of good for the United States but also acknowledging the problem of institutional racism during an interview on CNBC.

The truth lies somewhere in the middle — according to a study from the American Civil Liberties Union, the bill “did not trigger mass incarceration, but it certainly encouraged mass incarceration to grow even further.”

Regardless, Trump claimed the bill is just one example of how Democrats have continuously failed the Black community.

“Racial justice begins with Joe Biden’s retirement from public life,” Trump said to a round of cheers.

And it’s true that Biden’s campaign has not been without a few race-related gaffes: In May, the candidate told Charlamagne tha God during an interview that “if you have a problem figuring out whether you’re for me or Trump, then you ain’t Black.”

Biden has since apologised for his remarks, but Trump seized on his opponent’s comments to point out that Biden “doesn’t know Black Americans like I do.”

Last week, Biden made his own appeal to Black voters with a series of events on this year’s inaugural National Black Voter Day.

Black Americans have largely supported Biden’s presidential bid and have been credited with transforming the Democratic presidential race and cementing his status as front-runner after his decisive primary win in South Carolina.

Throughout the course of his campaign, Biden has detailed plans to address issues facing Black Americans, vowing to address institutional racism in his first 100 days in office. It’s a sharp contrast to President Donald Trump, who has made little effort to unite the country and leaned heavily on “law and order” rhetoric.

With just over a month until election day, recent polling from The Democracy Fund shows that likely Black voters prefer Biden over Trump by 83 percent. Trump gained between 6-8 percent of the Black vote in the 2016 election, according to research by the Pew Research Center and Cornell’s Roper Center.

Ahead of the president’s visit, Georgia Democrats issued a statement condemning Trump’s refusal to address systemic racism as well as his mishandling of the coronavirus pandemic.

“Four years ago, Donald Trump tried to sell himself to Black Americans by asking us ‘What do you have to lose?’ Four years later, Black Georgians have lost lives and livelihoods under the Donald Trump presidency,” Democratic Party of Georgia Chairwoman Nikema Williams said in a statement. “From Trump’s complete mishandling of the coronavirus pandemic that has disproportionately harmed Black and Brown communities, to his continued attacks on the Affordable Care Act, and his refusal to address the systemic racism that is hurting Black and Brown Americans, Donald Trump has failed our community, and no campaign visit at the eleventh hour can change that reality.”

0 0 0 0
Previous : The Dog Bar in St. Pete to give baths to furry friends to raise money for one of their own
Next : Uber will require riders to take a mask-wearing selfie if a driver reports them not wearing one