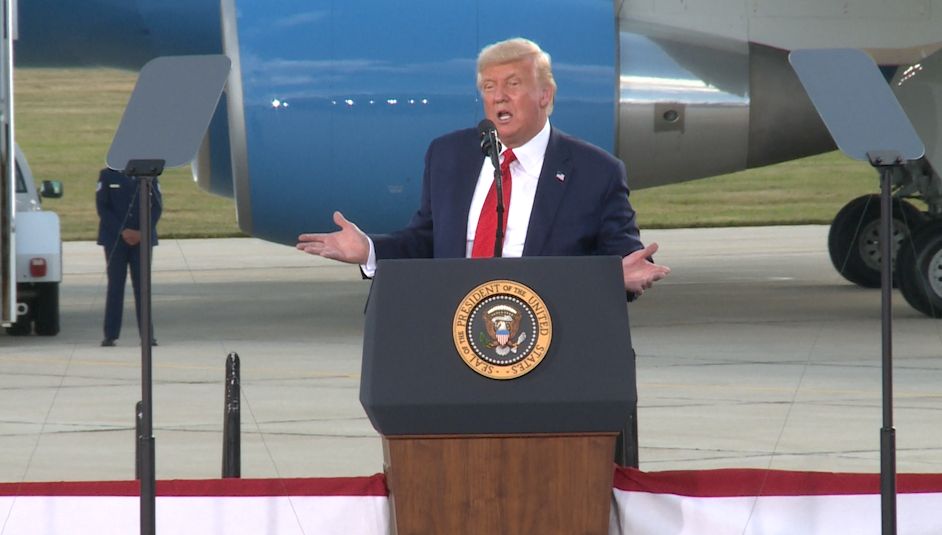 OSHKOSH, Wis. — If you needed proof Wisconsin is a battleground state in the 2020 presidential election, all you had to do was look to Monday.

On the same day Democrats launched their largely-virtual national convention from Milwaukee, President Donald Trump made a stop in Oshkosh to talk about jobs, the economy, and just about everything else on his platform.

Flanked by a pair of large banners with the worlds “Jobs! Jobs! Jobs!,” Trump talked about how his administration built a rock-solid economy that was undermined by the coronavirus pandemic.

“Thanks to my administration’s policies, we’re now witnessing the fastest economic recovery in the history of our country,” he told the crowd at Basler Flight Services at Wittman Regional Airport. “ Over the past three months we have already gained much more than 9 million jobs nationwide — that’s a record.”

Trump vowed there will be an economic improvement in the coming months as treatments and vaccines for COVID-19 are developed. Something he said is happening rapidly.

“We will defeat the China virus. We will have the greatest economy we’ve ever had next year — unless wants somebody wants to quadruple your taxes and the crazy things they’re talking about,” Trump said.

Supporters said they have faith the economy will improve under Trump’s leadership.

“I like that he’s getting the economy back and he’s fighting for us the working people,” said Jeff Wicinsky, of Winneconne. “He stands up for the average Joe on the street. He stands up for all of us. I love it.”

Much of the event focused on jobs, security, and differences of policy with Biden. Trump wrapped up his comments to the crowd by urging them to get out and vote,  saying a loss in November will only be because the election is rigged.

“Just make sure your vote gets counted because the only way we’re going to lose this election is if the election is rigged,” he said. “Remember that.”

0 0 0 0
Previous : Surveillance video shows a man stealing a puppy from a Tampa pet store
Next : Pasco teachers getting classrooms ready for students to return