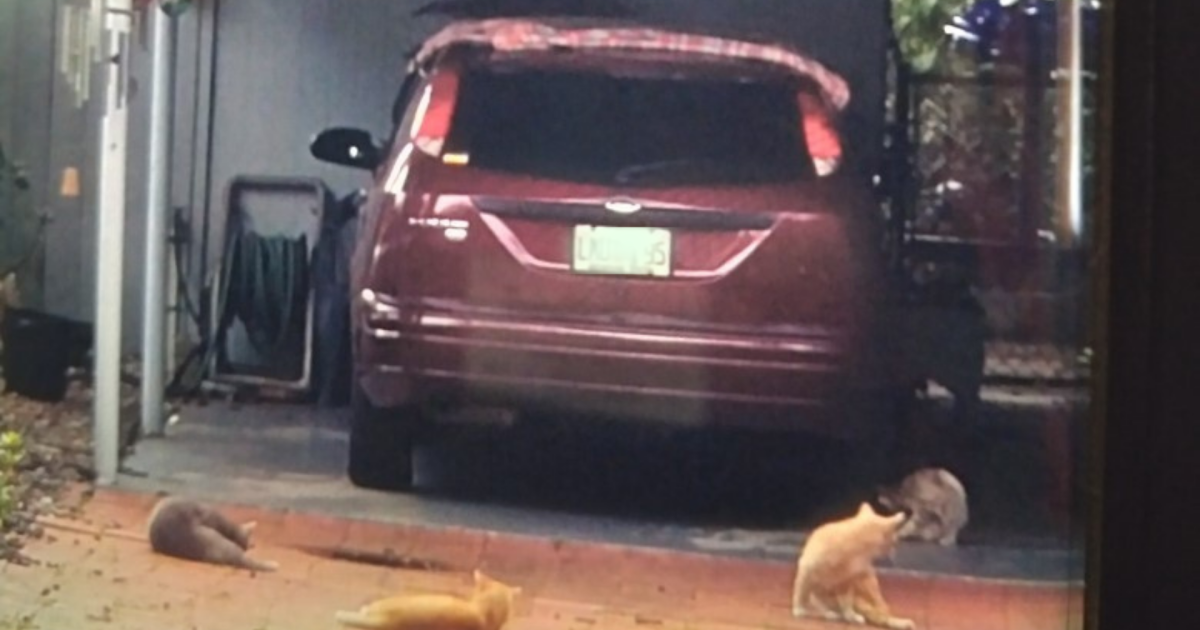 TAMPA, Fla. — A Tampa man says he’s overwhelmed by stray cats that he says are taking over his neighborhood, but county policies meant to decrease the cat population limit what he can do about the situation.

“They come here to eat or whatever, breed. I don’t know what they do. Then they scatter,” said Andres Santana, who lives on a quiet street off Florida Avenue in north Tampa.

Santana says his neighbors have a “cat collection.”

Cats pop out of palm trees and tropical plants from the lush landscaping across the street.

The homeowners didn’t want to do an on-camera interview but say they only claim one of the cats as their own.

They admit feeding feral cats that come to their home.

On a recent afternoon, we saw a cat proudly gnawing on a squirrel he caught.

“They’re jumping on the cars. They sleep overnight on my roof. They’re trying to get the birds on the nest. They’re everywhere,” Santana said.

Santana says the cats damage his vehicles, scratching the paint.

“You spend $50, $80 getting your car detailed. Next thing you wake up, you got paw marks, hair, scratches all over your car,” he said.

Santana says he called animal control, and they told him to get a trap, but there’s not much else he can do.

Since 2008, Hillsborough County has participated in the trap, neuter, vaccinate and return program.

Sherry Silk is CEO of the Humane Society of Tampa Bay, which has spayed or neutered 70,000 cats through that program.

“It’s okay to feed outdoor cats. There’s nothing wrong with that. You can’t get in trouble for doing it. But the cats do have to be sterilized,” Silk said.

Santana’s neighbors say they’ve fed cats for years. They say before the pandemic, they took as many feral cats as they could catch to a clinic to get fixed.

Hillsborough County Animal Control visited the neighborhood earlier this week and reported only six or seven feral cats, which had all been spayed or neutered.

“They’re nice people. I don’t got nothing against them. Who’s gonna have five years of patience dealing with this? “ said Santana.

The owners and the Humane Society hope Santana will have a little more patience.

At one time, 20,000 cats a year were euthanized in Hillsborough County.

Neither the county nor the Humane Society will now euthanize feral cats, but the cat population has continued to drop.

If you have feral cats in your neighborhood, the Humane Society of Tampa Bay can help you get them spayed, neutered and vaccinated.

You can also rent traps to catch feral cats through the organization.

If you have a story you’d like the I-Team to investigate, email us at [email protected].

0 0 0 0
Previous : Florida on a Tankful: Take an Exotic Kayaking Tour at Brevard Zoo
Next : Disney Plans to Lay Off Thousands by End of March