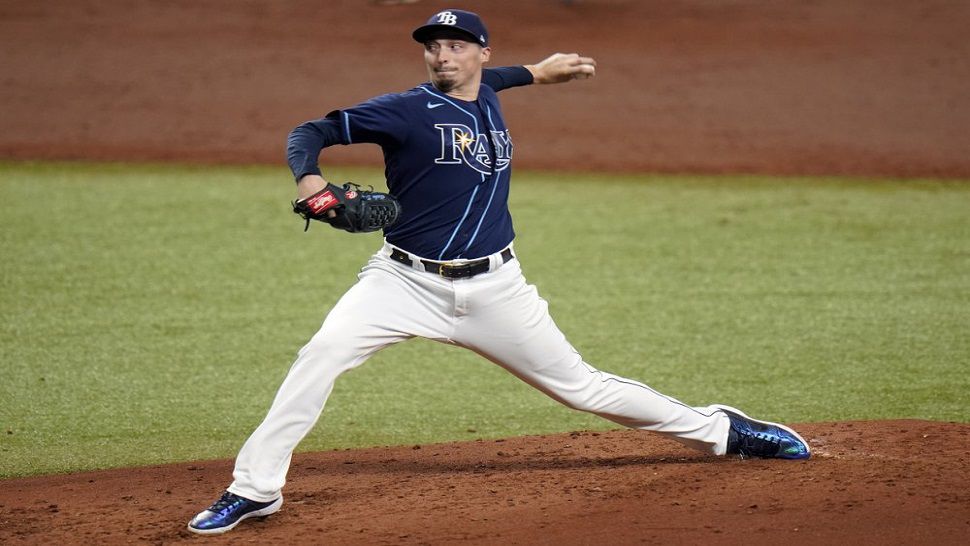 ST. PETERSBURG, Fla. — Blake Snell took a no-hitter into the sixth inning and the top-seeded Tampa Bay Rays opened the playoffs Tuesday with a 3-1 victory over the Toronto Blue Jays.

Manuel Margot hit a two-run homer and Randy Arozarena tripled and scored on a wild pitch to give Snell and a dominant Rays bullpen all the offensive support needed to begin the best-of-three wild-card matchup.

The AL East champion Rays will try to advance Wednesday in Game 2 at Tropicana Field.

Fairbanks closed for his first save of the season as Rays manager Kevin Cash kept taking a fresh and innovative approach to using his pitching staff.

Toronto reliever Robbie Ray took the loss, giving up one run and one hit in three innings. Margot hit his homer to left-center field off A.J. Cole to push Tampa Bay’s lead to 3-0 in the seventh inning.

The wild-card Blue Jays broke through in the eighth against Anderson, didn’t allow a run in 18 of 19 regular season appearances.

Rowdy Tellez’s pinch-hit single gave Toronto a spark. Cavan Biggio followed with a double before Biggio delivered his sacrifice fly to make it 3-1.

Fairbanks worked a scoreless ninth to became the 13th different pitcher to earn a save for the Rays this season.

The Rays are back in the playoffs after beating Oakland in last year’s AL wild-card game and losing to Houston in the divisional round.

With a league-best 40-20 record, they captured their first division in 10 years. Tampa Bay also won six of 10 meetings against Toronto despite being outscored 48-44 and outhomered 17-11 during the regular season series.

Snell has only had modest success against the Blue Jays during his career, but the young division rivals had no answers for the lefty Tuesday until Kirk singled through the hole between first and second base with Castillo already warming up in the Rays bullpen.

The Rays starter walked Grichuk with two outs in the first before fanning Vladimir Guerrero Jr. Teoscar Hernandez drew a one-out walk before being erased on an inning-ending double play that got Snell through the fifth.

Matt Shoemaker, who missed a month of the regular season with a right shoulder injury, started and worked three scoreless innings for the Blue Jays.

Arozarena led off the fourth with a triple off Ray, and scored when a wild pitch on a walk to Adames got past catcher Danny Jansen.

Rookie LHP Shane McClanahan, who’s yet to appear in a major league game, was a surprise addition to Tampa Bay’s 28-man wild card roster. The 23-year-old learned of the decision from Cash and general manager Erik Neander on Monday. The first people he tried to call were his mother and father, who didn’t answer. When his mother called back two hours later and asked what was wrong, he delivered the news. “She was happy,” McClanahan said. “I was like, ’Hey, you might want to answer this phone call.”

Blue Jays: Tellez (right knee strain) was added to the wild-card roster after going on the 10-day injured list on Sept. 9 and missing the rest of the regular season.

Lefty Hyun Jin Ryu starts for the Blue Jays against right-hander Tyler Glasnow, who’s been Tampa Bay’s best pitcher. Both will be working on an extra day of rest.