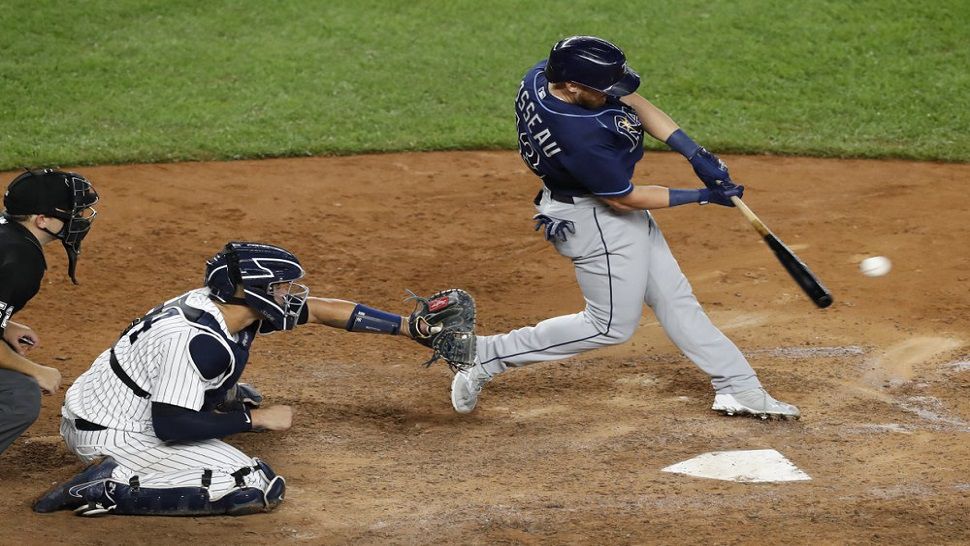 Jalen Beeks pitched out of a ninth-inning jam and Tampa Bay got home runs from slumping hitters Ji-Man Choi and Mike Zunino off Gerrit Cole, who struck out 10 in a no-decision.

Cole’s 20-game regular-season winning streak remained intact, but he was visibly upset when manager Aaron Boone pulled him with two outs in the seventh after a season-high 109 pitches.

Britton (0-2) struck out Austin Meadows with a runner on to end the inning, then got himself in trouble in the eighth when he flubbed a toss while covering the bag after a sprawling stop by first baseman Luke Voit.

Yandy Diaz went to second on the error and advanced on a wild pitch before Brandon Lowe walked. One out later, Brosseau and Willy Adames delivered consecutive singles off Britton to give the Rays a 4-2 lead.

Tampa Bay has won four straight and 10 of 11 to move within a half-game of the AL East-leading Yankees. The Rays (16-9) have taken five of six in the season series and handed New York its first two losses this season at Yankee Stadium following a 10-0 start at home.

It’s only the second time in their last 17 tries over six years that the Rays have won a series in the Bronx. They’ll go for their first three-game sweep at Yankee Stadium since July 2014 on Thursday afternoon.

Pete Fairbanks (3-1) threw a called third strike past Aaron Hicks in the seventh to keep the score tied. Beeks replaced Chaz Roe with two on in the ninth and struck out pinch-hitter Miguel Andujar. After a wild pitch put two runners in scoring position, Beeks whiffed Thairo Estrada for his second career save and first this season.

Cole has gone 28 straight regular-season starts without a loss, tied with Kris Medlen and Dave McNally for the second-longest streak in major league history behind Roger Clemens, who went 30 starts without a defeat from 1998-99.

Cole’s only defeat since May 2019 came in the World Series opener last year with Houston against Washington.

Cole quickly fell behind 2-0 on homers by Choi in the second and Zunino in the third. Choi came in hitting .169 with one home run. Zunino, batting ninth, was at .091 with two long balls.

Voit reached the second deck with an opposite-field shot to right in the bottom of the third for his ninth home run this season and fourth in three days.

Aaron Hicks tripled leading off the sixth and scored on a sacrifice fly by Gio Urshela, who made two slick plays at third base and threw home to get a runner in the eighth.

Urshela reached over the Rays’ dugout railing to snag a popup — and then caught himself, finally with some assistance from Tampa Bay players that prevented him from tumbling head over heels to the ground.

Rays: All-Star RHP Charlie Morton played catch and plans to throw another bullpen Thursday or Friday. Morton has been on the 10-day injured list since Aug. 10 with shoulder inflammation. … RHP Yonny Chirinos (right elbow strain) was placed on the 10-day IL and 6-foot-10 RHP Aaron Slegers was recalled from the alternate training site. LHP Sean Gilmartin was added to the taxi squad.

Yankees: RF Aaron Judge (strained right calf) did some early hitting and throwing. He’s still on target to potentially come off the 10-day injured list Saturday when first eligible. … 2B DJ LeMahieu (sprained left thumb) said a couple of doctors told him it will probably be two to three weeks before he can resume baseball activity. But there’s no fracture. “It’s pretty sore,” LeMahieu said. “A lot better now.”

Rays: The team hadn’t announced a starter for Thursday, but manager Kevin Cash said RHP Trevor Richards “will be in the mix to provide a lot of work.”

Yankees: LHP James Paxton (1-1, 7.04 ERA) allowed three earned runs in five innings Saturday against Boston for his first win this season. He is 3-1 with a 3.38 ERA in six career starts versus Tampa Bay.