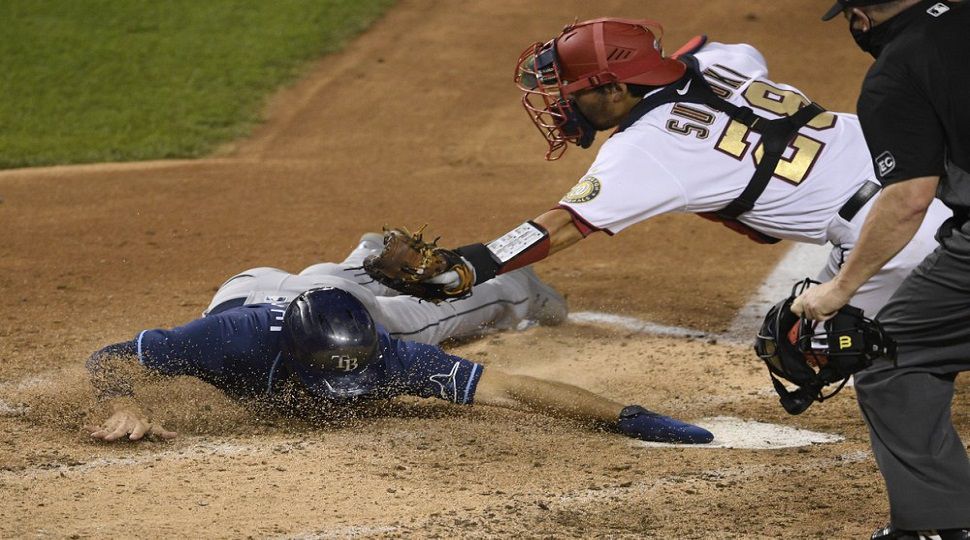 WASHINGTON (AP) Juan Soto drove in a run in his return to the lineup and the Washington Nationals used strong relief pitching to beat the Tampa Bay Rays 5-3 on Tuesday night to sweep the two-game series.

After missing five games with left elbow soreness, Juan Soto was back in the lineup as the designated hitter for just the second time this season. The 21-year old drove in a run in his first at-bat with a groundout to third in the first.

Soto finished 1 for 2 with two walks and a run.

The AL East-leading Rays had won or split their past 10 series before dropping both games against the Nationals. The teams will meet for another two-game set in Tampa Bay on Sept. 15-16.

Carter Kieboom drove in Brock Holt with a two-out double in the second to increase the Nationals’ lead to 2-0. It was Kieboom’s first extra-base hit of the season and first career double.

The Nationals added two more in the third when Trea Turner scored on a sac-fly to left by Asdrubal Cabrera and Soto came home on a two-out single to left by Josh Harrison to put the Nationals up 4-0.

Tampa Bay left-hander Ryan Yarbrough (0-3) returned from the injured list and had his shortest outing of the season in going 2 2/3 innings while allowing four runs and six hits.

The Rays got back into it with a three-run sixth after finally getting to Anibal Sanchez (2-4). The Nationals starter had given up just two hits through five but gave up two hits to three of the batters he faced in the inning before leaving without recording an out.

Ji-Man Choi’s RBI single knocked Sanchez out of the game, Yoshi Tsutsugo hit an RBI double off reliever Wander Suero, and Choi scored on Suero’s wild pitch to cut the Nationals lead to 4-3.

Washington got one back in the sixth and their bullpen did the rest. Sean Doolittle had a 1-2-3 seventh, Tanner Rainey replicated it in the eighth and Daniel Hudson earned his ninth save.

Rays: Manager Kevin Cash said that RHP Oliver Drake (right biceps tendinitis) will be re-evaluated on Thursday and could be ready this weekend if there are no setbacks. Drake is 0-2 with a 3.38 ERA in five appearances this season.

Nationals: OF Victor Robles was hit by an Aaron Slegers’ 83 mph slider in the chest in the sixth inning and walked to first base with a trainer before staying in the game. … Howie Kendrick (sore hamstring) and Luis Garcia (sore heel) each missed a third consecutive game.

0 0 0 0
Previous : Tropical Storms Paulette, Rene Expected To Stay Out To Sea
Next : Teaching Online, In-Person at Same Time Too Much for Pinellas Instructors