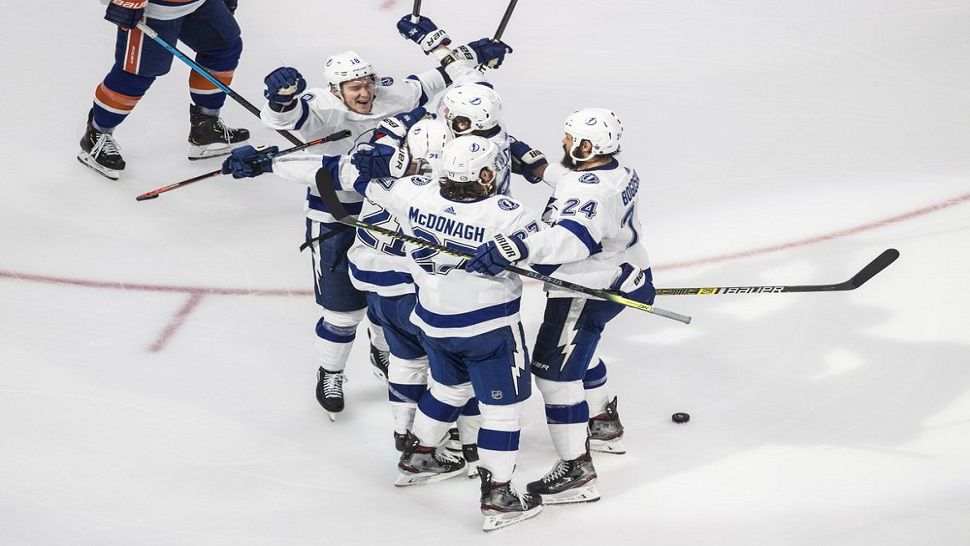 EDMONTON, Alberta — Blake Coleman tied it 15 seconds after the New York Islanders took the lead, Ondrej Palat scored the go-ahead goal 12 seconds later and the Tampa Bay Lightning moved within a victory of the Stanley Cup Final with a 4-1 victory Sunday in Game 4 of the Eastern Conference Final.

Brayden Point added a goal in the third period in his return after missing Game 3 with injury. Point was visibly playing through pain after getting tangled up with Islanders defenseman Adam Pelech in the third period and missed the rest of the game, yet when he was on the ice he and the Lightning’s best players were a big reasons they took a 3-1 series lead.

Tampa Bay put 36 shots on net, wore down New York defenders and made opposing goaltender Semyon Varlamov work. Andrei Vasilevskiy, who has played every minute of every game this postseason made 26 saves to push the Lightning to the verge of their first Cup Final appearance since 2015.

The “Triplets” line of Palat, Tyler Johnson and Nikita Kucherov got the Lightning to that final, and the first line this year of Palat, Point and Kucherov may be even better. The three combined on the third-period goal that provided some breathing room after a furious stretch of three quick goals in the second.

The Islanders took the lead on Brock Nelson’s perfectly placed shot that beat Vasilevskiy 11:27 into the second period. Tampa Bay responded on the very next shift with Coleman’s goal, and then Palat’s made it three in 27 seconds.

In a series that started getting chippy toward the end of Game 3 Friday, there were some high tensions. New York’s Matt Martin shot the puck at the first period horn, earning an unsportsmanlike conduct penalty and inciting some pushing and shoving.

Even with the Islanders inserting tough guy Ross Johnston into their lineup, the temperature never boiled over into a full-fledged fight. But there’s till time for that in Game 5.

NOTES: Patrick Maroon sealed it with an empty netter. … Michael Dal Colle came out for the Islanders to get Johnston in. … Varlamov finished with 32 saves. … Lightning defenseman Victor Hedman played 29:12