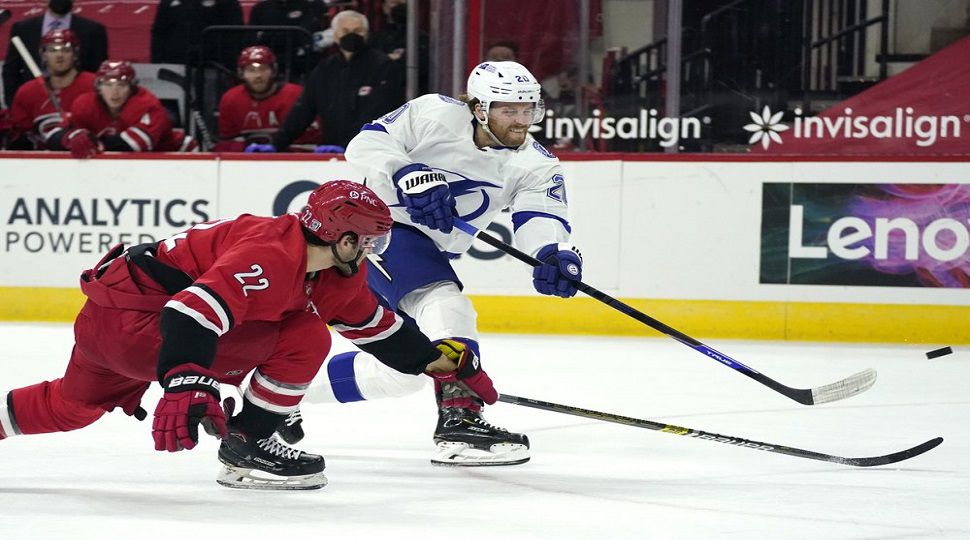 Palat, Steven Stamkos and Victor Hedman each had a goal and an assist for the Lightning, who were shut out in each of their first two matchups with the Hurricanes this season.

Stamkos got the Lightning on the board early in the second, and Palat picked up his seventh goal when he poked his own rebound off the skates of Carolina defenseman Brady Skjei and goalie James Reimer before it went into the net.

Hedman scored his fourth goal in the second and Alex Killhorn added a late empty-netter to clinch it for the Lightning, who had lost three of four. Andrei Vasilevskiy finished with 34 saves for Tampa Bay.

Jesper Fast scored his first two goals for Carolina. Reimer made 28 saves, including 11 in the first period.

The Hurricanes had won two straight and five of six.

The Lightning entered Monday having gone nearly 156 minutes of game time and more than seven periods since last finding the back of the net against the Hurricanes.

Stamkos stopped that drought when he one-timed a feed from Hedman on the left side at 2:26 of the second.

Before that goal, Tampa Bay hadn’t scored against Carolina since Brayden Point’s second-period goal in a 3-1 win in January 2020.

The 23-year-old is an undrafted player who signed with the organization in 2018 and went on to become the American Hockey League rookie of the year a year later. He scored 64 goals at the AHL level with Syracuse, with three coming this season.

Carolina entered the game at 12-3-1 with 25 points, rising to the top of the Central Division standings while matching the franchise’s best record through 16 games.

The other time came in the 2005-06 season, which ended with the Hurricanes winning their only Stanley Cup in a seven-game series against Edmonton.

The teams shift their four-game set to Florida for games on Wednesday and Thursday.