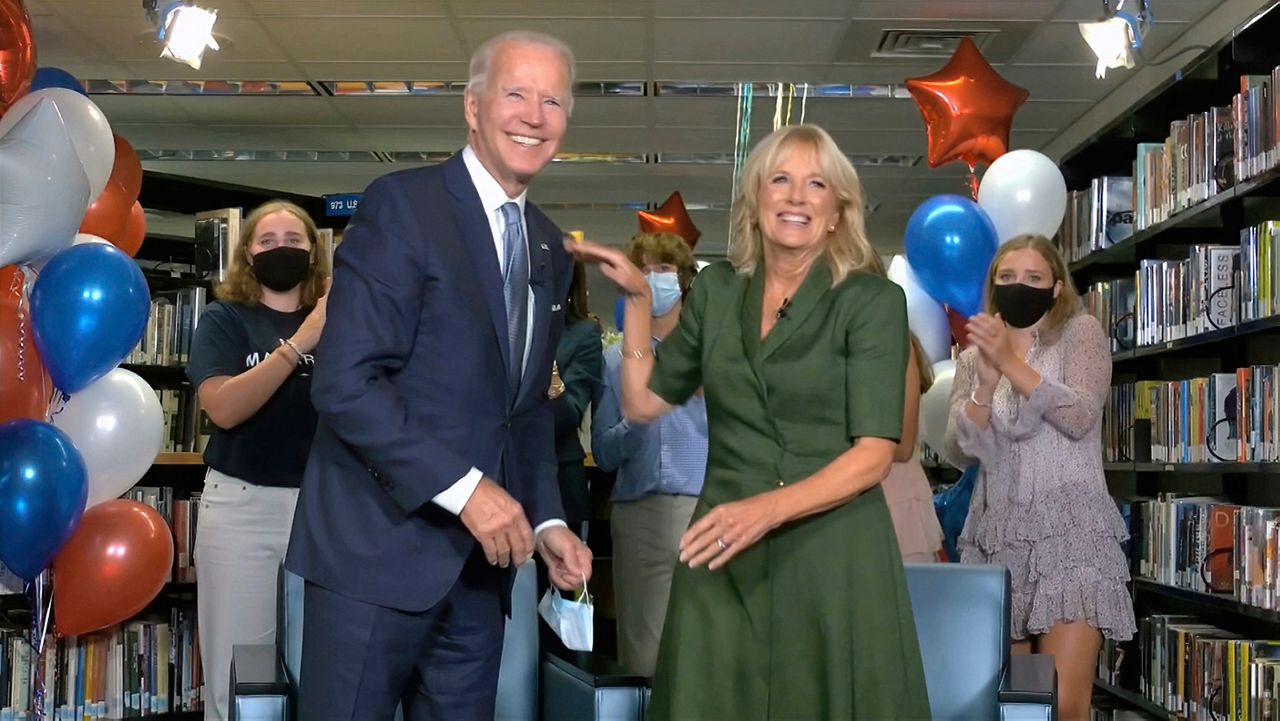 There were no screaming crowds. No balloons — or, rather, not nearly as many than in years past. Rather than going around an arena to do the traditional roll call, the nomination process was delivered virtually, a “mash-up” from all 57 states and U.S. territories.

In spite of all that, it was business as usual on Night 2 of the DNC.

“Thank you very, very much from the bottom of my heart. Thank you all,” Biden said after receiving the party’s formal nomination.

Here are 5 key takeaways from the second night of the Democratic National Convention:

The night’s theme of “Leadership Matters” was echoed from nearly everyone who took the virtual stage, with heavy hitters such as former presidents Bill Clinton and Jimmy Carter, former secretaries of state John Kerry and Colin Powell, and former acting Attorney General Sally Yates highlighting the differences between Joe Biden and President Donald Trump.

“Donald Trump says we’re leading the world. Well, we are the only major industrial economy to have its unemployment rate triple,” Clinton said. “At a time like this, the Oval Office should be a command center. Instead, it’s a storm center. There’s only chaos.”

Kerry didn’t pull any punches when he delivered what might have been the line of the night to criticize Trump’s foreign policy: “When this president goes overseas, it isn’t a goodwill mission, it’s a blooper reel.”

Powell, George W. Bush’s former Secretary of State, echoed Kerry’s message, saying Biden “will trust our diplomats and our intelligence community, not the flattery of dictators and despots.”

Rep. Alexandria Ocasio-Cortez is a bonafide star in the Democratic Party — her Instagram following alone nearly doubles that of Biden’s.

At Tuesday’s DNC, she received about 90 seconds of air time — compared to about three minutes for former Secretary of State John Kerry.

“Names like Alexandria Ocasio-Cortez and even [Texas Congressman] Julian Castro are bigger stars than John Kerry, and these voices represent an entire generation of new activists, working people, and people of color — they are worth more than just a minute of the DNC’s time, Ed Espinoza, Executive Director of the group Progress Texas, said in an email with Spectrum News.

However, other progressives spoke in prominent spots — Sen. Bernie Sanders delivered the second-to-last speech on Monday, and on Tuesday, 17 “rising stars” delivered the keynote address that kicked off the night, including Stacey Abrams, Rep. Conor Lamb and Rep. Mari Manoogan.

“A new generation of leaders is rising up,” said Pennsylvania state Rep. Malcolm Kenyatta, an openly gay lawmaker who praised Biden for supporting marriage equality earlier than many older politicians.

Jacquelyn Asbie, a security guard at the New York Times who went viral after a chance meeting with Joe Biden, delivered a nominating speech for the Democratic nominee, a moment from the DNC’s first hour that drew a lot of attention online.

“In the short time I spent with Joe Biden, I could tell he really saw me. That he actually cared, that my life meant something to him,” Asbie said.

“Joe Biden has room in his heart for more than just himself,” she added.

“We’ve been through a lot, and we have tough days ahead. But nominating someone like that to be in the White House is a good place to start. That’s why I nominate my friend Joe Biden as the next president of the United States.”

One of the most powerful, show-stopping moments of the night came when health care activist Ady Barkan took the stage.

Barkan, who suffers from ALS, rose to prominence in 2017 when he confronted then-Arizona Sen. Jeff Flake about the Tax Cuts and Jobs Act of 2017. The advocate for a single-payer health care system initially endorsed Sens. Elizabeth Warren and Bernie Sanders, but endorsed Biden in July.

In his powerful speech, he called the prospect of Trump’s re-election an “existential crisis” and urged people to vote for Joe Biden “because our lives depend on it.”

“Like so many of you, I have experienced the ways our health care system is fundamentally broken,” Barkan said. “Enormous costs, denied claims, dehumanizing treatment when we are most in need.”

“Today, we are witnessing the tragic consequences of our failing health care system,” continued Barkan, referring to the coronavirus pandemic. “Our loved ones are dying in unsafe nursing homes. Our nurses are overwhelmed and under-protected, and our essential workers are treated as dispensable.”

Barkan, who lost the ability to speak, urged “each of us” to “be a hero for our communities, for our country.”

This year’s roll call looked completely different than in years past — and might have been one of the most memorable parts of the evening.

Zipping around the country, the roll call featured speakers from all 57 U.S. states and territories casting their delegates for the nominees for president in front of unique backdrops.

North Carolina was the state that officially put Biden over the top, taking the word “presumptive” out of the conversation.

One of the highlights: Rep. Joseph McNamara of Rhode Island appearing alongside a local chef bearing a massive plate of fried calamari.

Joe and Jill Biden briefly appeared live at the end of the roll call, where members of his family threw balloons and confetti at the official Democratic nominee.

Dr. Jill Biden, the former Second Lady of the United States, took the virtual stage from Brandywine High School in Wilmington, Delaware, in the classroom where she taught English, to talk about her husband’s character — especially in the face of great personal tragedy.

“How do you make a broken family whole? The same way you make a nation whole. With love and understanding,” Dr. Biden said of her husband’s ability to heal a divided nation, “and with small acts of compassion. With bravery. With unwavering faith.”

Dr. Biden talked of her own career as an educator — she continued to teach college full-time as second lady, and said she plans to continue to do so if her husband wins the presidency.

She also spoke about how the Democratic nominee struggled after their son, Beau, died during Joe Biden’s second term as vice president. “I wondered if I would ever smile and feel joy again,” she said, but she noted that her husband “went back to work” amid his own grief.

“I know that if we entrust this nation to Joe,” she said, “he will do for your family what he did for ours: Bring us together and make us whole. Carry us forward in our time of need. Keep the promise of America, for all of us.”