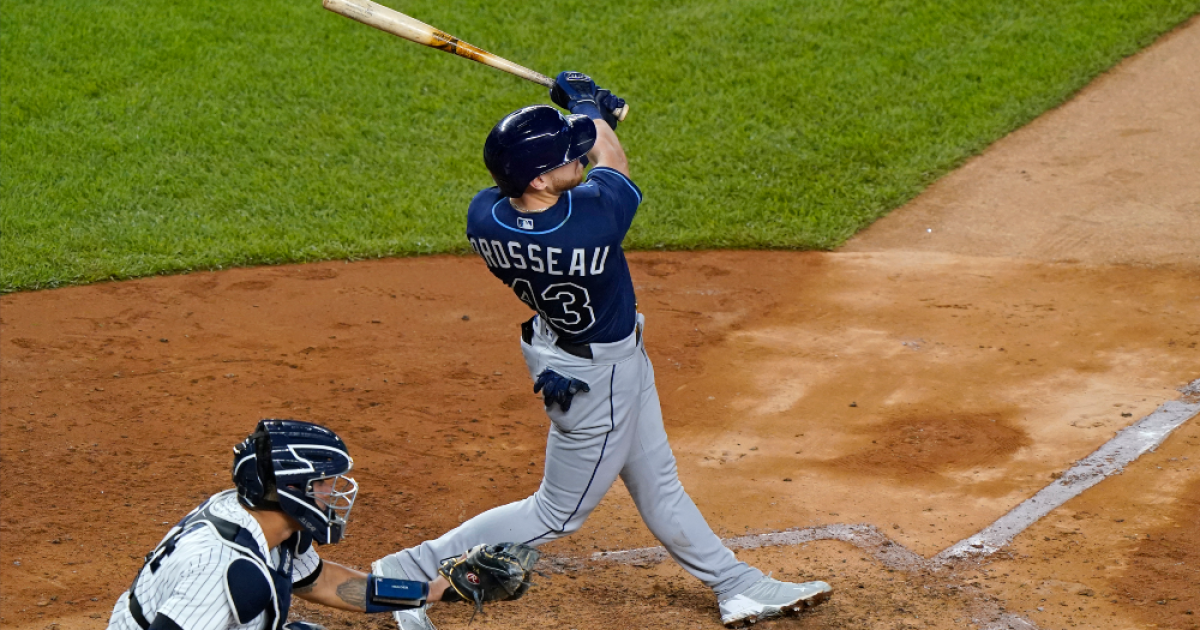 A night after Yankees closer Aroldis Chapman threw a 101 mph fastball over his head, Brosseau posted his second career multi-homer game and the first-place Rays ended the season series with an 8-2 edge.

“No revenge,” Brosseau said. “We put everything behind us. We came today to play ball and to win a series and finish on a high note (in the) regular season against these guys.”

Brosseau capped Tampa Bay’s four-run first inning against Jordan Montgomery (2-2) when he hit a 2-2 curve an estimated 420 feet into the visitors’ bullpen beyond the left-center fence. Brosseau made it 5-0 in the fifth by hitting an 0-1 fastball into the Yankees’ bullpen in right-center.

“It was emotional,” said Rays bench coach Matt Quatraro, who served as acting manager for Cash. “A lot of us had tears in our eyes, a special moment for him we’ll never forget. Just goes to show the willpower that that guy has to move on, to put it behind him and play his game.”

Brosseau had three hits and batted .500 (7 for 14) with three homers and seven RBIs against the Yankees this season.

The Rays improved to 20-4 in their last 24 games and moved 4 1/2 games ahead of the Yankees. Tampa Bay also avoided consecutive losses for the first time since a five-game skid from July 29 to Aug. 2.

There was no retaliation by the Rays a night after Cash seemed to threaten the Yankees in the wake of Chapman’s pitch by saying: “And the last thing I’ll say on this is I got a whole damn stable full of guys that throw 98 mph. Period.”

The only hit batter was Hunter Renfroe in the fifth. He was plunked in the leg by Yankees reliever Ben Heller, who was ejected by first base umpire Chad Fairchild.

“That was a scary moment last night,” Morton said about Brosseau. “That was really nice for all of us to be able to see that. That was pretty great.”

Montgomery got only two outs and allowed four runs on five hits.

“They just made some good swings on some bad pitches and it got out of control,” Montgomery said.

Clint Frazier homered for the Yankees, who are 4-9 in their last 13 games. DJ LeMahieu hit an RBI single in the ninth, but Peter Fairbanks retired Luke Voit to end it.

“They’ve obviously played really well against us. They’ve had our number to this point, and we haven’t really been able to figure them out,” Yankees left fielder Brett Gardner said. “So the hope is we’ll see those guys again in October.”

The game was delayed five minutes due to a drone hovering over the outfield in the first as the Yankees batted.

Center fielder Manuel Margot first noticed it and alerted the umpires after a 1-1 pitch to Voit. Umpires then briefly pulled the Rays off the field and looked at the sky waiting for the drone to leave before resuming play.

It was the third drone delay in the majors this season.

On Aug. 4, a game between Pittsburgh and Minnesota was delayed nine minutes, and Tampa Bay’s game in Boston on Aug. 13 was delayed for about four minutes.

0 0 0 0
Previous : Former 1st-Round Pick Fournette Plans to Sign With Bucs
Next : Another Hot and Humid Day