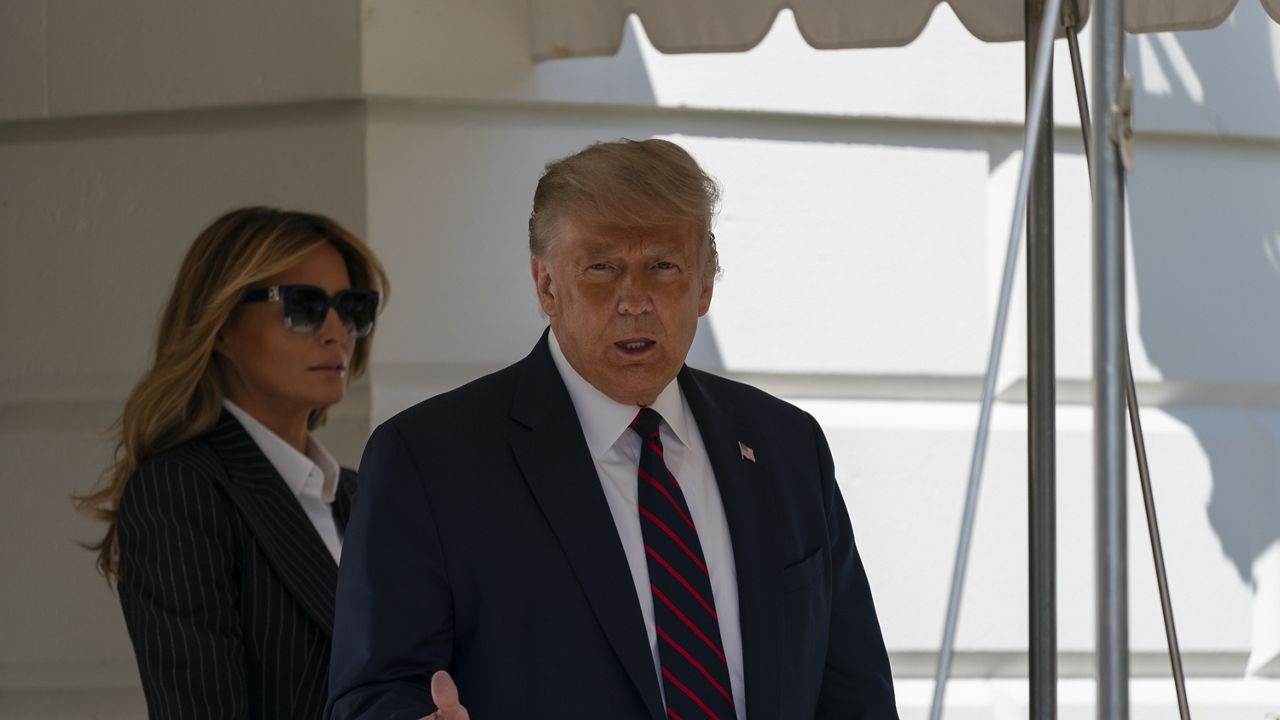 In a memo, the White House physician said he expects the president to “continue carrying out his duties without disruption.”

This is a developing story. Check below for updates throughout the day:

Trump’s Democratic challenger, former Vice President Joe Biden, is offering his thoughts and prayers to the president and first lady.

Jill and I send our thoughts to President Trump and First Lady Melania Trump for a swift recovery. We will continue to pray for the health and safety of the president and his family.

“Jill and I send our thoughts to President Trump and First Lady Melania Trump for a swift recovery. We will continue to pray for the health and safety of the president and his family,” Biden posted to Twitter Friday.

A source close to the Democratic challenger’s campaign says that Biden will be tested Friday morning, according to a report.

Two key members of the president’s cabinet have tested negative for coronavirus.

Treasury Secretary Steven Mnuchin has tested negative, according to Monica Crowley, Assistant Secretary for Public Affairs for the U.S. Treasury.

As part of regular protocols, Secretary @stevenmnuchin1 has been tested daily for COVID-19. He tested negative for COVID-19 this morning and will continue to be tested daily.

“We’re praying for the President and the First Lady, that they’ll have a speedy recovery,” Pompeo told reporters. “I spoke with the Vice President’s office this morning as well. We’re taking this, obviously, very seriously, and we’ll do everything we can to keep everyone safe, including you all.”

Pompeo has reportedly not had contact with President Trump since Sept. 15, when Trump joined leaders from Israel, the UAE, and Bahrain for the signing of the Abraham Accords.

“Vice President Pence remains in good health and wishes the Trumps well in their recovery,” O’Malley wrote on Twitter.

Pence is tested for COVID-19 daily, according to O’Malley.

President Trump’s rally in Florida has been canceled.

The president’s calendar for Friday is now minimal, with just a phone call on COVID-19 support to vulnerable seniors scheduled the afternoon.

This is an abrupt halt for in-person campaign visits just weeks ahead of the election, as Trump has continued to reassure Americans that we are “rounding the corner” of this pandemic, although national health experts do not agree.

President Donald Trump had a busy week this week, as one might expect with less than a month to go until the election.

The president traveled to three states, including a stop in Cleveland, Ohio, for a memorable debate with former Vice President Joe Biden, his Democratic challenger.

Here is a look at Trump’s busy schedule from this week.

Russian President Vladimir Putin is extending wishes of a speedy recovery to U.S. President Donald Trump and his wife, Melania, and expressing “sincere support in this difficult moment,” according to a statement released by the Kremlin on Friday.

Trump announced on Twitter early Friday that he and first lady Melania Trump had tested positive for the coronavirus.

The Kremlin says Putin sent Trump a telegram saying, “I hope that your inherent vitality, good spirits and optimism will help you cope with the dangerous virus.”

My best wishes to President Trump and the First Lady. Hope they both have a speedy recovery from coronavirus.

Johnson tweeted Friday morning: “My best wishes to President Trump and the First Lady. Hope they both have a speedy recovery from coronavirus.”

Johnson was hospitalized for a week in April after he contracted COVID-19, the disease caused by the new coronavirus. After he was released, the prime minister thanked doctors and nurses at St. Thomas’s Hospital for saving his life. Johnson was treated in the hospital’s intensive care unit, where he received oxygen but was not put on a ventilator.

Meanwhile, stock prices slipped on Trump’s announcement ahead of the opening of U.S. markets.

U.S. stock futures and Asian shares fell Friday. The future contracts for both the S&P 500 and the Dow industrials dropped nearly 2% but were trading 1.2% lower several hours later. Oil prices tumbled about 3%.

The Nikkei 225 index shed strong early gains, losing 0.7% to 23,029.90 after the Tokyo Stock Exchange resumed trading following an all day outage due to a technical failure. Reports that the Japanese government is preparing new stimulus measures to help the economy recover from a prolonged downturn worsened by the coronavirus pandemic provided only a temporary lift. Prices fell further after Trump’s announcement.

President Donald Trump said early Friday that he and first lady Melania Trump have tested positive for the coronavirus, a stunning announcement that plunges the country deeper into uncertainty just a month before the presidential election.

Trump, who has spent much of the year downplaying the threat of a virus that has killed more than 205,000 Americans, said he and Mrs. Trump were quarantining. The White House physician said the president is expected to continue carrying out his duties “without disruption” while recovering.

Still, Trump’s diagnosis was sure to have a destabilizing effect in Washington, raising questions about how far the virus had spread through the highest levels of the U.S. government. Hours before Trump announced he had contracted the virus, the White House said a top aide who had traveled with him during the week had tested positive.

Trump was last seen by reporters returning to the White House on Thursday evening and did not appear visibly ill. Trump is 74 years old, putting him at higher risk of serious complications from a virus that has infected more than 7 million people nationwide.

The president’s physician said in a memo that Trump and the first lady, who is 50, “are both well at this time” and “plan to remain at home within the White House during their convalescence.”

The diagnosis marks a devastating blow for a president who has been trying desperately to convince the American public that the worst of the pandemic is behind them. In the best of cases, if he develops no symptoms, which can include fever, cough and breathing trouble, it will force him off the campaign trail just weeks before the election.

Trump’s handling of the pandemic has already been a major flashpoint in his race against Democrat Joe Biden, who spent much of the summer off the campaign trail and at his home in Delaware because of the virus. Biden has since resumed a more active campaign schedule, but with small, socially distanced crowds. He also regularly wears a mask in public, something Trump mocked him for at Tuesday night’s debate.

There was no immediate comment from the Biden campaign on whether the former vice president had been tested since appearing at the debate with Trump or whether he was taking any additional safety protocols.

Trump had been scheduled to attend a fundraiser and hold another campaign rally in Sanford, Florida, on Friday evening. But just after 1 a.m., the White House released a revised schedule with only one event: a phone call on “COVID-19 support to vulnerable seniors.”

Trump’s announcement came hours after he confirmed that Hope Hicks, one of his most trusted and longest-serving aides, had been diagnosed with the virus Thursday. Hicks began feeling mild symptoms during the plane ride home from a rally in Minnesota on Wednesday evening, according to an administration official who spoke on condition of anonymity to disclose private information. She was isolated from other passengers aboard the plane, the person said.

Hicks had been with Trump and other senior staff aboard Marine One and Air Force One en route to that rally and had accompanied the president to Tuesday’s presidential debate in Cleveland, along with members of the Trump family. They did not wear masks during the debate, in violation of the venue rules.

But Trump has consistently played down concerns about being personally vulnerable, even after White House staff and allies were exposed and sickened. Since the coronavirus emerged earlier this year, Trump has refused to abide by basic public health guidelines — including those issued by his own administration — such as wearing masks in public and practicing social distancing. Instead, he has continued to hold campaign rallies that draw thousands of supporters.

The news was sure to rattle an already shaken nation still grappling with how to safely reopen the economy without driving virus transmission. The White House has access to near-unlimited resources, including a constant supply of quick-result tests, and still failed to keep the president safe, raising questions about how the rest of the country will be able to protect its workers, students and the public as businesses and schools reopen.

Questions remain about why it took so long for Trump to be tested and why he and his aides continued to come to work and travel after Hicks fell ill. Trump traveled to New Jersey on Thursday for a fundraiser, exposing attendees to the virus.

Pence’s aides had no immediate comment on whether the vice president had been tested or in contact with Trump.

It is unclear where the Trumps and Hicks may have caught the virus, but in his Fox interview, Trump seemed to suggest it may have been spread by someone in the military or law enforcement.

Yet since the early days of the pandemic, experts have questioned the health and safety protocols at the White House and asked why more wasn’t being done to protect the commander in chief. Trump continued to shake hands with visitors long after public health officials were warning against it, and he initially resisted being tested.

Trump is far from the first world leader to test positive for the virus, which previously infected Brazilian President Jair Bolsonaro and British Prime Minister Boris Johnson, who spent a week in the hospital, including three nights in intensive care. Former Italian Prime Minister Silvio Berlusconi was hospitalized last month while fighting what he called a “hellish” case of COVID-19.

While there is currently no evidence that Trump is seriously ill, the positive test raises questions about what would happen if he were to become incapacitated due to illness.

The Constitution’s 25th Amendment spells out the procedures under which the president can declare himself “unable to discharge the powers and duties” of the presidency. If he were to make that call, Trump would transmit a written note to the Senate president pro tempore, Republican Sen. Chuck Grassley of Iowa, and House Speaker Nancy Pelosi, D-Calif. Pence would serve as acting president until Trump transmitted “a written declaration to the contrary.”