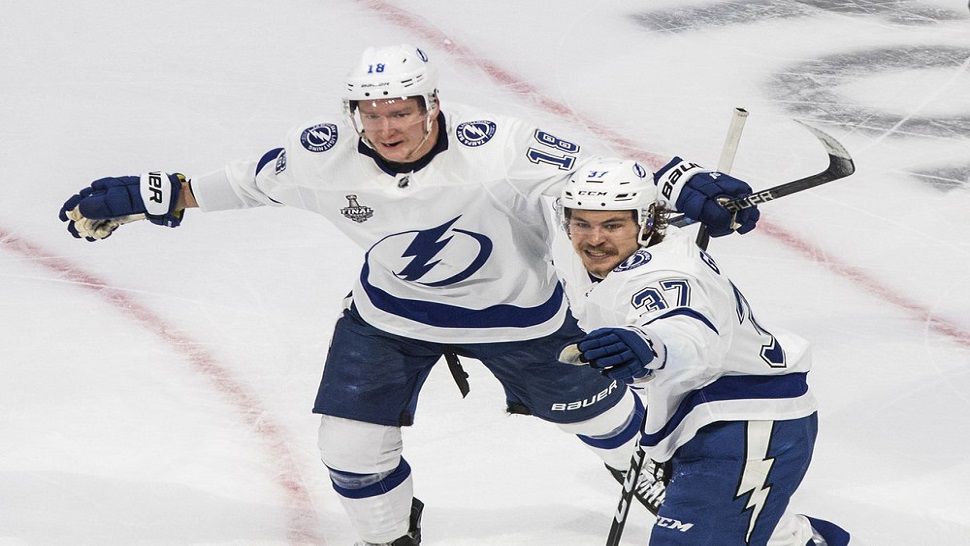 EDMONTON, Alberta — Kevin Shattenkirk scored in overtime on a controversial power play, Brayden Point had two goals and the Tampa Bay Lightning beat the Dallas Stars 5-4 Friday night to take a 3-1 series lead in the Stanley Cup Final and move to the cusp of winning the title.

With Game 5 Saturday night, Tampa Bay is potentially 24 hours away from its second championship in franchise history. The Lightning won the Cup in 2004, but this core has so far been unable to get over the hump despite being one of the best teams in the NHL for much of the past decade.

They’re on the verge thanks to Shattenkirk’s goal 6:34 into OT and another dominant performance by top players who looked like they wouldn’t be denied after getting this far. Point, the Lightning’s top center, scored consecutive goals at the end of the first period and start of the second, creating and sustaining the kind of momentum that has been so important in the playoffs.

The Lightning got the winning power play when Dallas captain Jamie Benn was called for tripping Point on a play where Benn’s skates never made contact with Points’ as the referee called it.

Fellow playoff MVP Victor Hedman showed why, saving a goal in the third period. With the puck slowly sliding in the crease toward the goal behind Andrei Vasilevskiy, Hedman swept it out of harm’s way.

Instead of the plucky Stars reclaiming the lead, Alex Killorn put the Lightning ahead a few shifts later with a play that was half hard-working power and half sublime skill. He won a puck battle behind the net, cruised to the right faceoff circle and fired a perfect shot into the top left corner.

There wasn’t much Stars goaltender Anton Khudobin could do on that one, and Vasilevskiy was the victim of two bad bounces that almost allowed Dallas to even the series. John Klingberg’s goal that opened the scoring came after his initial shot went off Tampa Bay’s Jan Rutta and through Hedman’s legs, and Joe Pavelski’s second that tied it in the third pinballed in off the goalie and Lightning defenseman Kevin Shattenkirk.

But the Lightning carried the play for much of the night and showed the depth and talent that has made them a Cup contender for several years. Their core players are closer to the Cup than they ever have been, five years after taking a 2-1 series lead in the final and losing in six to Chicago.

It would take an impressive comeback by a suddenly beaten up Stars bunch to keep Tampa Bay from another sunshine state title, this time won in the NHL’s northernmost city with no fans in the stands.

The Lightning came in with more important players fighting through injuries, including Point and No. 2 center Anthony Cirelli. But the Stars lost another key piece in forward Roope Hintz, who was injured when Tyler Johnson’s stick got stuck in his left skate and he crashed hard into the boards.

The Lightning survived a penalty kill of their own minutes early in OT after defenseman Mikhail Sergachev was whistled for holding Tyler Seguin.

NOTES: Pavelski’s two goals give him 60 in his playoff career, tying him with Joe Mullen for the most by an American player. … Perry became the first player in NHL history to score a regular season and a Stanley Cup Final goal in the month of September. … Stars forward Roope Hintz left in the second period after Tyler Johnson’s stick got stuck in his left skate and he crashed hard into the boards. He did not return. … With captain Steven Stamkos unavailable again because of injury, the Lightning stuck with 12 forwards and six defensemen, inserting Carter Verhaeghe in his place.

Game 5 Saturday night marks the first back to back in the final since 2009 and just the second since the 1950s.