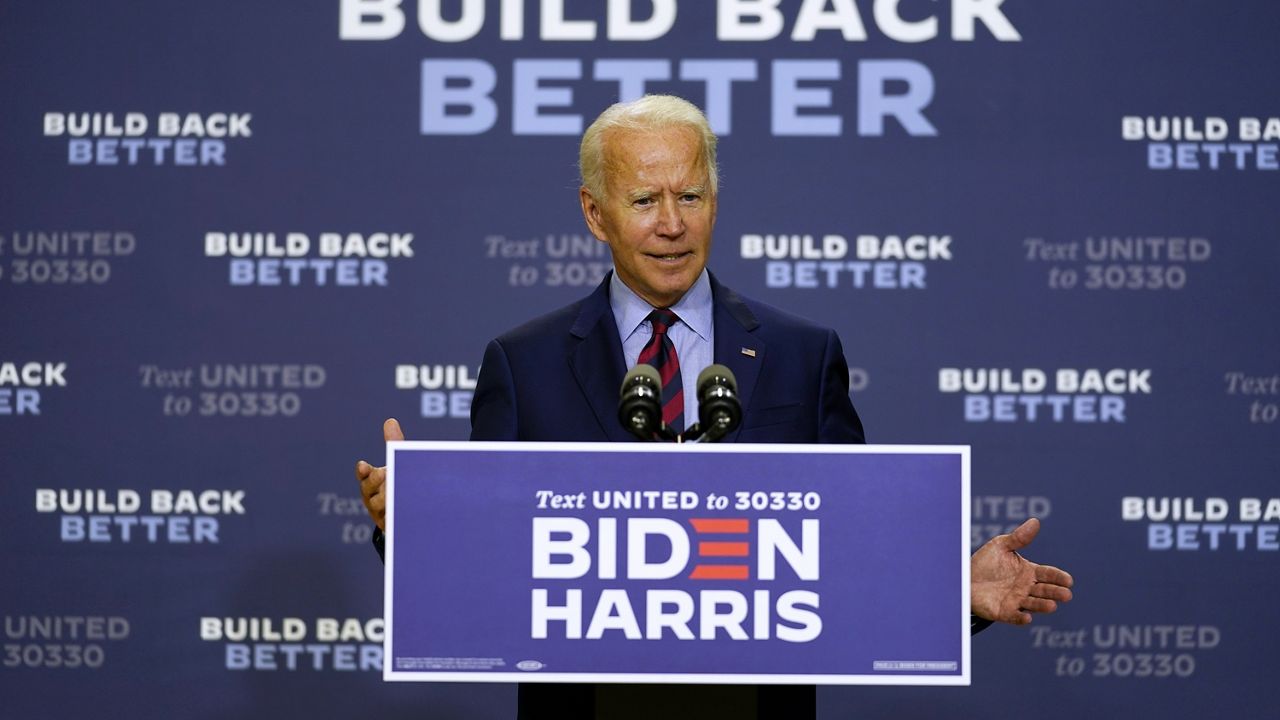 The president and his allies have dismissed the report in The Atlantic as false.

The allegations, sourced anonymously, describe multiple offensive comments by the president toward fallen and captured U.S. service-members, including calling World War I dead at an American military cemetery in France as “losers” and “suckers” in 2018.

The reported comments, many of which were confirmed independently by the AP, are shining a fresh light on Trump’s previous public disparagement of American troops and military families. That opens a new political vulnerability for the president less than two months from Election Day.

Voice cracking, Biden told reporters that “you know in your gut” Trump’s comments, if true, are “deplorable.”

“I’ve just never been as disappointed, in my whole career, with a leader that I’ve worked with, president or otherwise,” Biden added. “If the article is true – and it appears to be, based on other things he’s said – it is absolutely damning. It is a disgrace.”

He added that “the president should humbly apologize to every Gold Star mother and father, to every Blue Star family that he’s denigrated … Who the heck does he think he is?”

Trump was alleged to have made the comments in Nov. 2018, as he was set to visit the Aisne-Marne American Cemetery during a trip to France. The White House said the visit was scrubbed because foggy weather made the helicopter trip from Paris too risky and a 90-minute drive was deemed infeasible.

Speaking Friday in the Oval Office, Trump denied ever uttering such comments: “It was a terrible thing that somebody could say the kind of things – and especially to me cause I’ve done more for the military than almost anyone anybody else.”

Biden’s critique was personal. The former vice president often speaks about his pride for his late son Beau’s service in the Delaware Army National Guard. As he spoke, Biden grew angry, raising his voice to rebut Trump’s alleged comments that Marines who died in battle were “suckers” for getting killed.

“When my son was an assistant U.S. attorney and he volunteered to go to Kosovo when the war was going on, as a civilian, he wasn’t a sucker,” Biden declared.

“When my son volunteered to join the United States military as the attorney general, he went to Iraq for a year, won the Bronze Star and other commendations, he wasn’t a sucker!”

Trump, who traveled to Pennsylvania on Thursday, told reporters after he returned to Washington that the Atlantic report was “a disgraceful situation” by a “terrible magazine.”

“I would be willing to swear on anything that I never said that about our fallen heroes,” Trump told the reporters, gathered on the tarmac in the dark. “There is nobody that respects them more. No animal — nobody — what animal would say such a thing?”

Biden has framed the election from the start as a referendum on Trump’s character. His allies quickly seized on the reported comments in hopes that could drive a wedge between military families and veterans from Trump. They also believe that the issue could help win over disaffected Republican voters who are fed up with Trump’s constant controversies.

In particular, Biden’s team believes his well-documented experience, both personally and politically, with military issues could help him make inroads with a population that broadly supported Trump in the 2016 election and could help sway the election this year in a number of close swing states.

Military families were broadly supportive of Trump in the 2016 election, and a Pew Research Center survey of veterans conducted in June of 2019 found overall that veterans were more supportive of Trump than the general public, and that roughly 60% of the veterans polled identified as Republicans.

On a call with reporters hosted by the Biden campaign Friday, Illinois Sen. Tammy Duckworth lambasted Trump for “belittling the sacrifices of those who have shown more bravery than he’s capable of.”

Duckworth, a retired Army National Guard lieutenant colonel who lost both of her legs in the Iraq War, has been a prominent critic of Trump’s handling of military issues. Knocking Trump for allegedly inventing an injury to avoid serving in the Vietnam War, Duckworth said that she’d “take my wheelchair and my titanium legs over Donald Trump’s supposed bone spurs any day.”

Khizr Khan, the Gold Star father who drew national attention after criticizing Trump during the 2016 Democratic National Convention, joined Duckworth on the call and said that Trump’s “life is a testament to selfishness.”

“Words we say are windows into our souls. So when Donald Trump calls anyone who places their lives in service of others a loser, we understand Trump’s soul,” he said. Khan’s son, Humayun, was killed in action in Iraq in 2004.

In 2016, Trump responded to the criticism from Khan by claiming he’d made sacrifices of his own and making an Islamophobic attack on Khan’s wife, Ghazala Khan, who was wearing a headscarf at the Democratic convention, saying, “She had nothing to say. She probably — maybe she wasn’t allowed to have anything to say. You tell me.”

Trump also denied calling the late Arizona Sen. John McCain, a decorated Navy officer who was a prisoner of war in Vietnam, a “loser” after his Aug. 2018 death.

Trump acknowledged Thursday he was “never a fan” of McCain and disagreed with him, but said he still respected him and approved everything to do with his “first-class triple-A funeral” without hesitation because “I felt he deserved it.”

In 2015, shortly after launching his presidential candidacy, Trump publicly blasted McCain, saying “He’s not a war hero.” He added, “I like people who weren’t captured.” At the time, Trump also shared a news article on Twitter calling McCain a “loser.”

Trump only amplified his criticism of McCain as the Arizona lawmaker grew critical of his acerbic style of politics, culminating in a late-night “no” vote scuttling Trump’s plans to repeal the Affordable Care Act. That vote shattered what few partisan loyalties bound the two men, and Trump has continued to attack McCain for that vote, even posthumously.

“It’s sad the depths that people will go to during a lead-up to a presidential campaign to try to smear somebody,” said White House Chief of Staff Mark Meadows Thursday.

Secretary of State Mike Pompeo told “Fox & Friends” on Friday that he was with the president for a good part of the trip to France. “I never heard him use the words that are described in that article,” Pompeo said.

Asked Friday about possibly seeing Trump when they will both be in Shanksville, Pennsylvania for the anniversary of the Sept. 11 terrorist attacks next week, Biden said, “I didn’t know he was going until after I announced on my own. Of course.”

Asked if he’d be willing to share a stage with Trump he said “Yes. He’s still the president of the United States of America.”