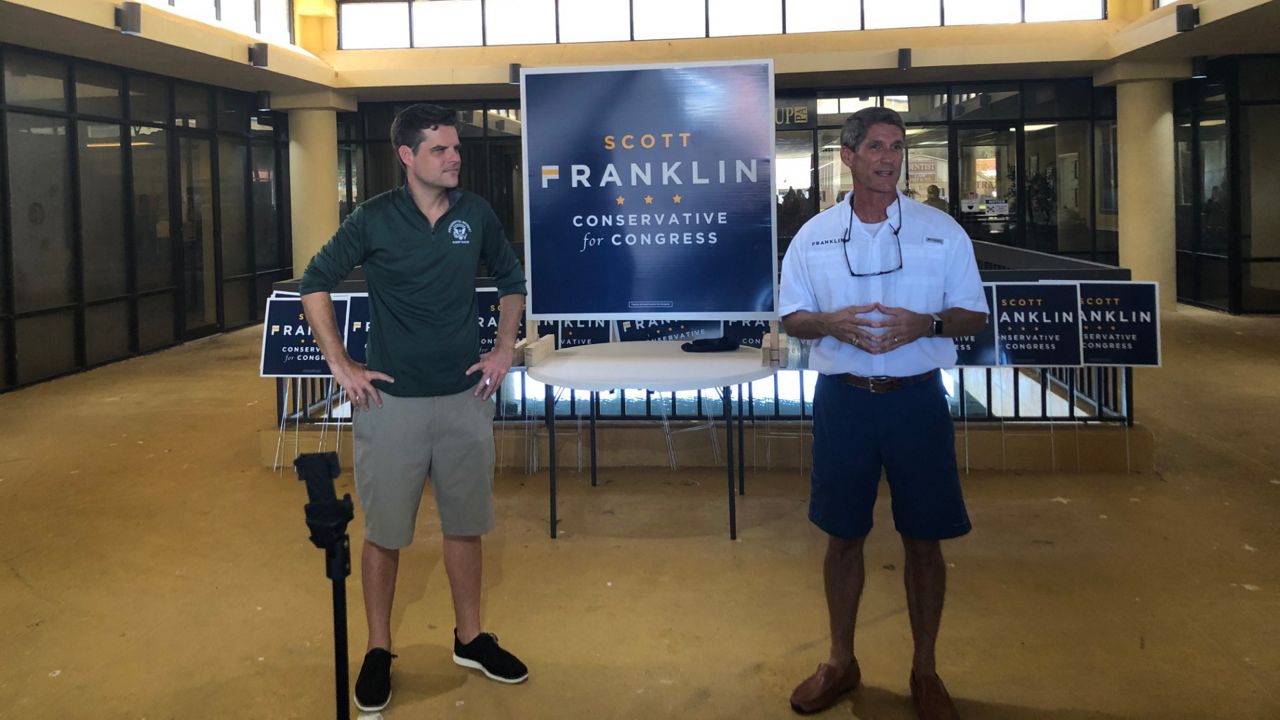 BRANDON, Fla. — With just days before the voting concludes in one of the most intriguing Republican primary races for Congress this year, U.S. Rep. Matt Gaetz made a campaign appearance for insurgent Congressional District 15 candidate Scott Franklin in Brandon Saturday morning.

Franklin is challenging first-term GOP incumbent Ross Spano in the Central Florida congressional seat that encompasses parts of Polk, Hillsborough and Lake counties. A poll released this week shows the race to be in a virtual tie, a stunning development in a race that Spano has been favored to win. But that was before Franklin began spending much of his own money to inform voters that Spano is currently under an investigation by the U.S. Dept. of Justice for alleged campaign finance violations.

“Everyone in America is watching this primary, because this primary says something about who we are as Republicans,” Gaetz told a crowd of about 30 people who took shade inside the vestibule of the Curry Law Group building located in a Brandon strip mall.

Referring to the perceived closeness of the race, Gaetz implored the onlookers to do whatever it takes in the next couple of days to ensure that Franklin can get over the finish line on Tuesday night.

“President Trump needs backup,” he said. “I need backup. And think that Scott Franklin is precisely the candidate that can send a message to Central Florida, to the Sunshine State and to the whole country that we’re going to be making America great again for a long time.”

Franklin says if he’s successful on Tuesday and advances to take on the Democratic nominee in the race this fall, that contest will squarely be a referendum on ideology. But he said that his current race with Spano is about a “battle of honesty and integrity and honor.”

“There’s no way we can go to the swamp and claim that we’re there to drain the swamp if we’re not ready to root out the bad within our own party,” Franklin said. “Otherwise, it’s hypocrisy and we just can’t do it.”

The U.S. Dept. of Justice announced last fall that it was investigating complaints that Spano allegedly loaned his campaign $180,000 that was borrowed from two friends during his 2018 run for the congressional seat. But Spano says the issue is all “political” because he says he dealt with it immediately after it came to his attention right before Election Day in 2018.

“At one point (I said) we made an error here,” Spano told Spectrum Bay News 9 last week. “I self-reported that. I fixed it immediately. Immediately, and before I was sworn into office. So beyond that initial FEC review of that issue, everything that has taken place since then has been politically motivated.”

While much of the Florida GOP is standing behind Spano (including Sen. Marco Rubio and every Republican member of the state’s congressional election), Franklin is making the most of his two highest level endorsements: Gaetz and Polk County Sheriff Grady Judd, who Franklin said would be recording another robocall this weekend that would be directed at voters in the district who have yet to cast a ballot in the Aug. 18 primary.

“Grady called me and said, ‘I heard your call for Scott Franklin. I have to do another one,’” Gaetz said while attempting to impersonate Judd’s distinctive voice.

Meanwhile, Spano lashed out at Gaetz on his campaign’s Facebook page on Saturday, claiming that he was “lying” regarding a vote on funding for President Trump’s border wall.

“Matt Gaetz, you’re lying to the voters of FL15 when you say I don’t support the President and the Border Wall. YOU voted No on that bill the same way I did, because it gave the President only a fraction of the funds he requested and it tied his hands on how & where he could build the wall.”