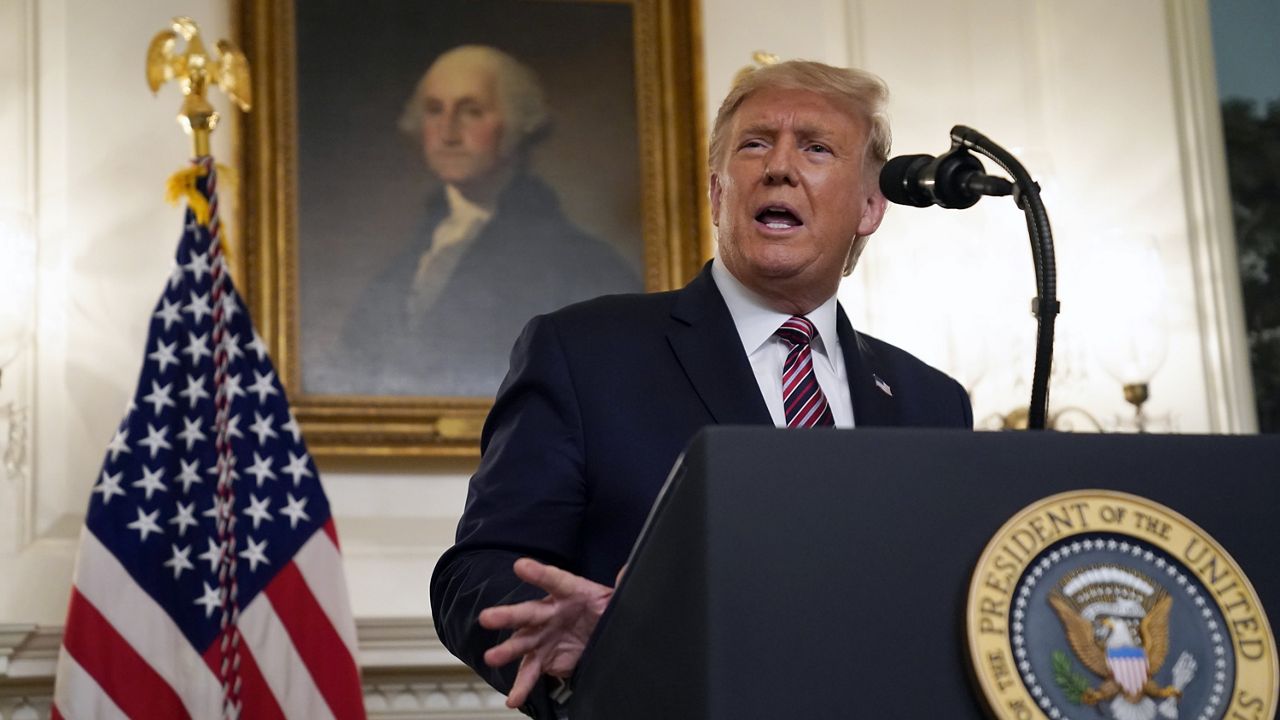 WASHINGTON, D.C. — In the early weeks of the coronavirus pandemic, President Donald Trump privately discussed how deadly and problematic the virus could potentially be while simultaneously downplaying the threat to the public, legendary journalist Bob Woodward writes in his new book, “Rage.”

Woodward conducted a series of 18 wide-ranging interviews with Trump from Dec. 5, 2019, to July 21. The conversations were recorded with the president’s permission.

In early February, Trump told Woodward that the virus was contagious, airborne and far “more deadly than even your strenuous flus,” reported CNN, which obtained the book ahead of its Sept. 15 release.

The president admitted to Woodward on March 19 that he hid what he really knew about the virus.

“I wanted to always play it down,” Trump said. “I still like playing it down, because I don’t want to create a panic.”

And play it down he did. In public comments in February alone, Trump claimed the United States had the virus contained, predicted that 15 cases would soon become zero and said, “One day, it’s like a miracle, it will disappear.”

There have now been 6.3 million coronavirus cases and nearly 190,000 deaths in the U.S.

In “Rage,” Woodward writes that national security adviser Robert O’Brien warned Trump in a Jan. 28 intelligence briefing that the virus would be the “biggest national security threat” of his presidency, while O’Brien’s deputy, Matt Pottinger, warned it could be as bad as the 1918 influenza pandemic that killed an estimated 50 million people worldwide, including 675,000 Americans.

Pottinger also told Trump then that asymptomatic spread was occurring in China.

Trump issued travel restrictions from China a few days later, but he continued to downplay the virus during public appearances.

Woodward views the weeks immediately after the intelligence briefing as a missed opportunity for Trump to exhibit great leadership. When asked in May if he remembered O’Brien’s Jan. 28 warning, Trump said, “No, I don’t.”

In their final interview in July, Trump told Woodward: “The virus has nothing to do with me. It’s not my fault. It’s — China let the damn virus out.”

In March, Trump also told Woodward that he had learned that “plenty of young people” were being hit hard by the virus, not just the elderly. But in recent months, he has pushed for the return of college football and schools to fully reopen, falsely saying that children were “almost immune” to COVID-19.

At a press conference where Trump announced his shortlist of Supreme Court picks, when asked if he misled the public by downplaying the risk of the coronavirus to reduce panic, Trump admitted, “Well, if you said ‘in order to reduce panic,’ perhaps that’s so.”

“The fact is, I’m a cheerleader for this country,” Trump added, “I love our country, and I don’t want people to be frightened. I don’t want to create panic … and, certainly, I’m not going to drive this country or the world into a frenzy.”

When asked why he did not take action in February, Trump said, “you didn’t really think it was going to be to the point that it was.”

He added, “you have to show leadership. And leadership is confidence in our country.”

McEnany went on to criticize reporters asking her about comments the president “allegedly told Bob Woodward,” but NBC’s Geoff Bennett reminded her that “it’s on tape.”

At a campaign event in Michigan earlier in the day, Trump’s opponent, former Vice President Joe Biden, slammed the president’s actions, saying “It’s beyond despicable. It’s a dereliction of duty, it’s a disgrace.”

I promise you that if I’m elected, I’ll always tell you the truth.

I’ll listen to the experts and do everything I can to contain this virus.

And I’ll always put your health and safety first — no matter the political cost.

“Rage” also quotes Dr. Anthony Fauci, the nation’s top infectious disease expert and a member of the White House Coronavirus Task Force, as telling others that Trump’s leadership during the pandemic was “rudderless” and that his “attention span is like a minus number.”

“His sole purpose is to get re-elected,” Fauci told one associate, Woodward writes.

Woodward writes that Coats “continued to harbor the secret belief, one that had grown rather than lessened, although unsupported by intelligence proof, that Putin had something on Trump. … How else to explain the president’s behavior? Coats could see no other explanation.”