The House of Representatives voted to impeach President Donald Trump Wednesday for inflaming his supporters in Washington exactly one week earlier, resulting in a deadly insurrection at the U.S. Capitol.

In one of the quickest processes in history and after an emotional debate between House lawmakers, Trump became the first U.S. president to be impeached twice. The article of impeachment approved by the House accuses him of “inciting violence against the government of the United States” and calls for his removal from office.

The final vote was 232-197, with 10 Republicans joining Democrats in voting to impeach the president. It was the most bipartisan impeachment vote in U.S. history.

The House will soon send the article of impeachment to the Senate, where they are required to begin a trial to decide whether to convict the president. Majority Leader Mitch McConnell said he would not call senators back earlier than Jan. 19, as scheduled, meaning that the trial will likely take place after President Trump leaves office.

McConnell did, however, tell colleagues in an email Wednesday that he has “not made a final decision” on how he will vote, adding, “I intend to listen to the legal arguments when they are presented to the Senate.”

In speeches on the floor Wednesday, Democrats called the president dangerous and painted his impeachment as their congressional duty, while Republicans called it mistimed and divisive.

“He must go. He is a clear and present danger to the nation that we all love,” House Speaker Pelosi said Wednesday, opening a two-hour debate on the article.

“Those insurrectionists were not patriots. They were not part of a political base to be catered to and managed. They were domestic terrorists, and justice must prevail,” she added.

The Minority Leader in the House, Rep. Kevin McCarthy (R-CA), directly implicated the president in last Wednesday’s riot, calling it an “attack on the people who work” in the Capitol.

“The president bears responsibility for Wednesday’s attack on Congress by mob rioters,” McCarthy said. “He should have immediately denounced the mob when he saw what was unfolding.”

Still, McCarthy said impeachment was not the path forward, and he said it would instead lead to more division. Others balked at the timing of the Democrats’ effort, with President Trump set to leave office in just seven days.

“We should be focused on bringing the nation together. Instead, Democrats are going to impeach the president for a second time one week — one week — before he leaves office,” Rep. Jim Jordan (R-OH) said. “Why? Politics, and the fact that they want to cancel the president.”

Not every Republican agreed with this assessment, with several voting in favor of impeachment, bucking the GOP majority.

“There is no excuse for President Trump’s actions,” Rep. Dan Newhouse (R-WA) said on the floor of the House. “The president took an oath to defend the constitution against all enemies foreign and domestic. Last week there was a domestic threat at the door of the Capitol and he did nothing to stop it. That is why with a heavy heart and clear resolve, I will vote yes on these articles of impeachment.”

In a powerful speech, Rep. Jason Crow (D-CO), an Army veteran, called on his Republican colleagues to exhibit “courage” by voting in favor of impeachment.

“This Congress sends our men and women to war every day.” Crow said. “”I’m not asking you to storm the beaches of Normandy but just to show a fraction of the courage we ask of our troops every day.”

While House lawmakers considered the president’s impeachment for inciting the violent mob, the building where they met looked much more secure than the week before, with hundreds of National Guardsmen spread out across its marble floors. The Guard is authorized to send as many as 15,000 troops to Washington, D.C., and at least 10,000 are expected there by this weekend. 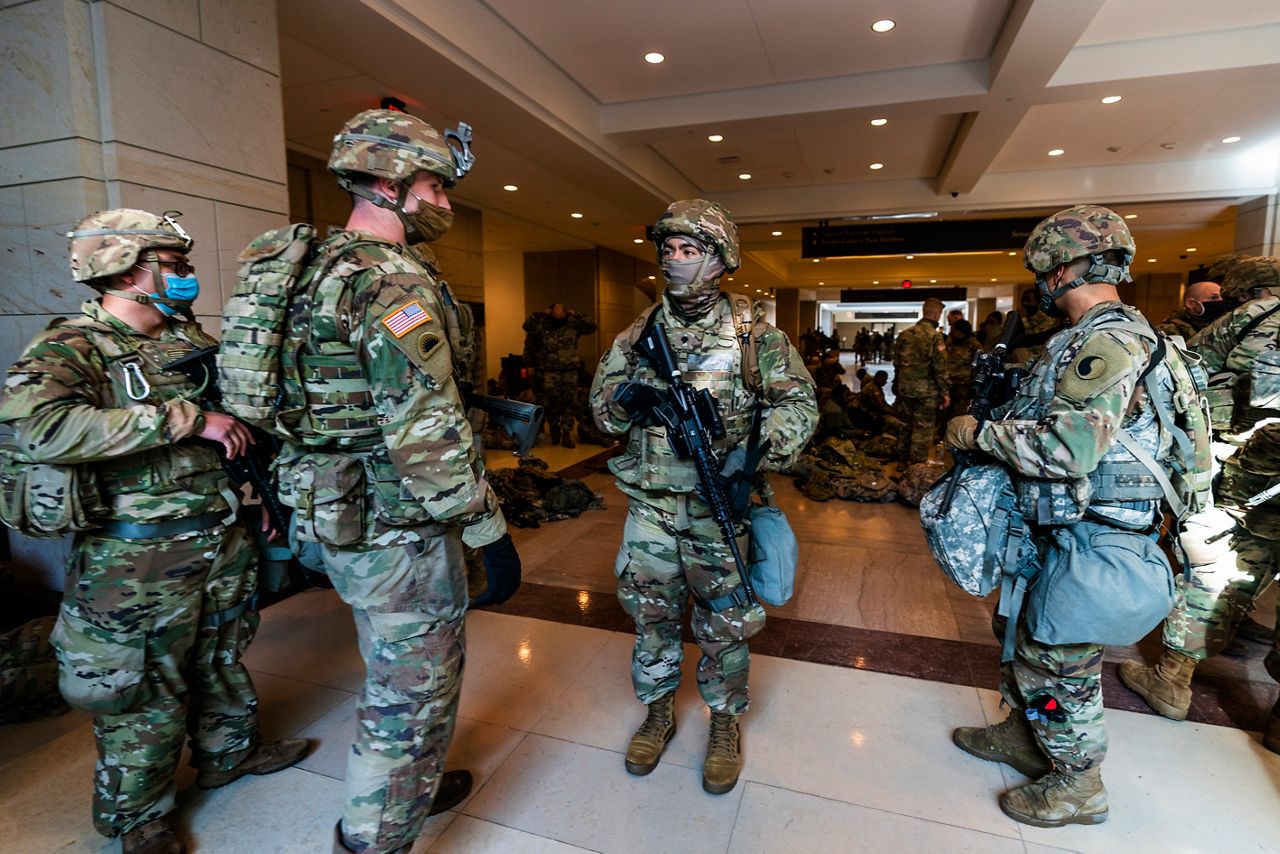 Members of the National Guard gather inside the Capitol Visitor Center, Wednesday, Jan. 13, 2021, in Washington as the House of Representatives continues with its fast-moving House vote to impeach President Donald Trump, a week after a mob of Trump supporters stormed the U.S. Capitol. (AP Photo/Manuel Balce Ceneta)

Outside, dozens more soldiers guarded the building, which is now completely surrounded by a seven-foot high black fence. Security got a major boost ahead of next week’s inauguration, including a special federal designation that went into effect Wednesday.

As House lawmakers debated his impeachment, President Trump put out a new statement condemning violence, as the FBI warned state capitals around the nation to prepare for threats next week.

“In light of reports of more demonstrations, I urge that there must be NO violence, NO lawbreaking and NO vandalism of any kind,” the president’s statement read.

“That is not what I stand for, and it is not what America stands for,” he added. “I call on ALL Americans to help ease tensions and calm tempers.”

Since McConnell said he will not call lawmakers back to Washington early for an impeachment trial, it’s now likely that it will happen during a Biden administration, after Trump has already left office.

The Senate is scheduled to reconvene on Jan. 19, and President-elect Joe Biden will be sworn in a day later.

But there is precedent for holding an impeachment trial after someone leaves office. In 1876, Secretary of War William Belknap was impeached by the House just moments after he resigned.

They acquitted Belknap, and this Senate could acquit President Trump as well. However, they could also hold a separate vote to bar the president from holding future office, which also has precedent.

0 0 0 0
Previous : Magnet, Fundamental and Career Programs Deadline Nears for Pinellas County Schools
Next : Hillsborough County Braces for Next Round of COVID-19 Vaccines