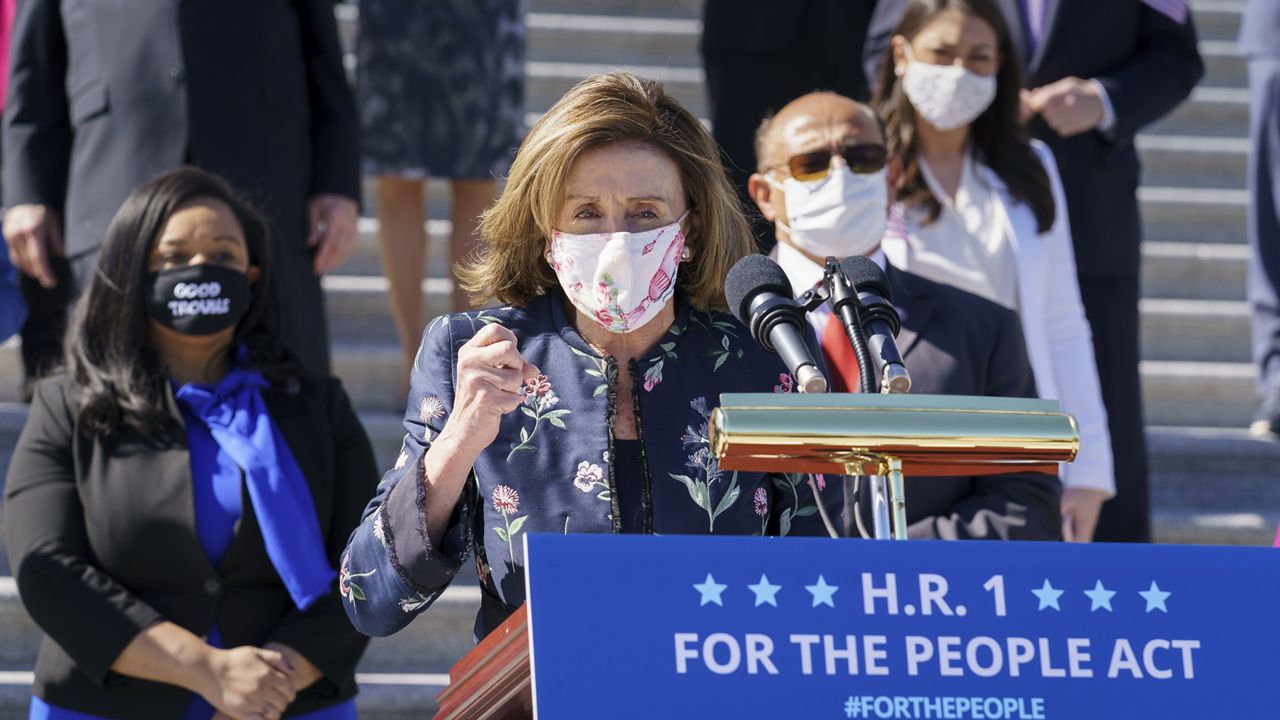 The House of Representatives will take up two key bills Wednesday night, both with sweeping and significant potential impacts if signed into law – H.R. 1, the For the People Act, which is aimed at, among other things, protecting voters’ rights, and H.R. 1280, the George Floyd Justice in Policing Act, which would ban neck restraints and no-knock warrants.

Both bills are expected to pass the Democratically controlled House, and have the ringing endorsement of the Biden administration, but face an uphill battle in a 50-50 Senate, as calls continue to eliminate the Senate filibuster.

The George Floyd Justice in Policing Act was set for a vote Thursday, but House Majority Leader Steny Hoyer announced that the bill would receive a vote Wednesday night, along with the For the People Act. Earlier Wednesday, Capitol Police announced it is beefing up security around the U.S. Capitol light of a “possible plot to breach the Capitol by an identified militia group on Thursday, March 4,” a date that coincides with a far-right conspiracy theory which claims that former President Donald Trump will be put back into office that day.

The bill aimed at reforming policing nationwide named after George Floyd, a Black man who was killed by Minneapolis police officers in May 2020, sparking worldwide social justice protests against police brutality.

“To make our communities safer, we must begin by rebuilding trust between law enforcement and the people they are entrusted to serve and protect.  We cannot rebuild that trust if we do not hold police officers accountable for abuses of power and tackle systemic misconduct – and systemic racism – in police departments,” the Biden Administration said in a statement in support of the bill. “The Administration encourages the House to pass this legislation, and looks forward to working with the Congress to enact a landmark policing reform law.”

A similar bill passed in the House last year, but the Republican-led Senate never held a vote on the bill.

The For the People act “will put a stop at the voter suppression that we’re seeing debated right now,” said Georgia Rep. Nikema Williams, who represents the district once held by longtime voting rights champion John Lewis. “This bill is the ‘Good Trouble’ he fought for his entire life.”

The measure also has the support of the Biden administration, which said in a statement: “In the wake of an unprecedented assault on our democracy, a never before seen effort to ignore, undermine, and undo the will of the people, and a newly aggressive attack on voting rights taking place right now all across the country, this landmark legislation is urgently needed to protect the right to vote and the integrity of our elections, and to repair and strengthen American democracy.”

“Consistent with the Administration’s commitment to racial equity, the bill would also expand the tools available to the Justice Department to enforce the voting rights of all Americans,” the statement continued .

The stakes are monumental, cutting to the foundational idea that one person equals one vote and could shape election outcomes for years to come. The push comes after decades of court decisions and Republican-championed state laws that have imposed limits that have fallen hardest on key constituencies of the Democratic Party.

The measure, which was all but certain to pass the House in a vote expected Wednesday, has been a priority for Democrats since they won their majority in 2018. But it has taken on added urgency in the wake of Donald Trump’s repeated false claims of a stolen 2020 election.

Courts and even Trump’s last attorney general, William Barr, found his claims about the election to be without merit. But, spurred on by those lies, state lawmakers across the U.S. have filed more than 200 bills in 43 states that would limit ballot access, according to a tally kept by the Brennan Center for Justice at New York University.

“It is difficult not to see the tentacles of America’s generations-old caste system – typically associated with slavery and Jim Crow – stretching into the 21st century,” he said.

“It’s incredible what they’re doing,” Schumer added. “We must do everything we can to stop them.”

Rep. John Sarbanes (D-MD), who sponsored the bill, said that outside of Congress “these aren’t controversial reforms.” Much of it, he noted, was derived from recommendations of a bipartisan commission.

In Iowa, the legislature has voted to cut absentee and in-person early voting and prevent local elections officials from setting up additional locations to make early voting easier. In Georgia, the House on Monday voted for a law to require identification to vote by mail and allow counties to cancel early in-person voting on Sundays, when many Black voters cast ballots after church.

On Tuesday, the Supreme Court appeared ready to uphold voting restrictions in Arizona, which could make it harder to challenge state election laws in the future.

When asked why proponents sought to uphold the Arizona laws, which limit who can turn in absentee ballots and enable ballots to be thrown out if they are cast in the wrong precinct, a lawyer for the state’s Republican Party was stunningly clear.

“Because it puts us at a competitive disadvantage relative to Democrats,” said attorney Michael Carvin. “Politics is a zero-sum game.”

Battle lines are quickly being drawn by outside groups who plan to spend millions of dollars on advertising and outreach campaigns.

Republicans “are not even being coy about it. They are saying the ‘quiet parts’ out loud,” said Tiffany Muller, the president of End Citizens United, a left-leaning group that aims to curtail the influence of corporate money in politics. Her group has launched a $10 million effort supporting the bill. “For them, this isn’t about protecting our democracy or protecting our elections. This is about pure partisan political gain.”

“Democrats want to use their razor-thin majority not to pass bills to earn voters’ trust, but to ensure they don’t lose more seats in the next election,” House Minority Leader Kevin McCarthy said from the House floor on Tuesday.

A coalition led by Ken Cuccinelli, a former Trump administration official in the Department of Homeland Security, will spend $5 million pressuring moderate Democratic senators to oppose the bill.

“The imperative is stopping H.R. 1 because it’s that bad,” said Cuccinelli. “H.R. 1 is not about making elections better. In fact, it’s about the opposite. It’s intended to dirty up elections.”

So what’s actually in the bill?

H.R. 1 would require states to automatically register eligible voters and offer same-day registration. It would limit states’ ability to purge registered voters from their rolls and mandate the restoration of former felons’ voting rights in states where they aren’t allowed to vote. Among dozens of other provisions, it would also require states to offer 15 days of early voting and allow no-excuse absentee balloting.

On the cusp of a once-in-a-decade redrawing of congressional district boundaries, typically a fiercely partisan affair, the bill would mandate that nonpartisan commissions handle the process instead of state legislatures.

Many Republican opponents in Congress have homed in on narrower aspects of the measure though, railing against the creation of a public financing system for congressional campaigns.

Davis charged that it would “launder corporate dollars” to publicly fund congressional campaigns. What the bill would actually do is use fines and settlement proceeds raised from corporate bad actors to create a pool of money open to candidates who meet certain requirements.

They’ve also excoriated a section that would force the disclosure of donors to “dark money” political groups.

It “would put people’s private information on display and put their personal security at risk,” said Rep. Debbie Lesko, R-Ariz. “People could lose their jobs, be shamed or even worse.”

Most campaigns and political groups are already required to disclose donor information. But over the past decade “dark money” nonprofits, which are not required to reveal such information under IRS law, have risen to prominence, often because they are attractive to wealthy interests that wish to remain anonymous.

Still, the biggest obstacles lie ahead in the Senate, which is split 50-50 between Republicans and Democrats.

On some legislation, it takes only 51 votes to pass, with Vice President Kamala Harris as the tiebreaker. On a deeply divisive bill like this one, they would need 60 votes under the Senate’s rules to overcome a Republican filibuster – a tally they are unlikely to reach.

Some have discussed options like lowering the threshold to break a filibuster, or creating a workaround that would allow some legislation to be exempt. Democratic congressional aides say the conversations are fluid but underway.

0 0 0 0
Previous : USF prepares for full return of in-person learning, on-campus student activities this fall
Next : Students learn how to protect themselves from sexual predators thanks to local author’s book