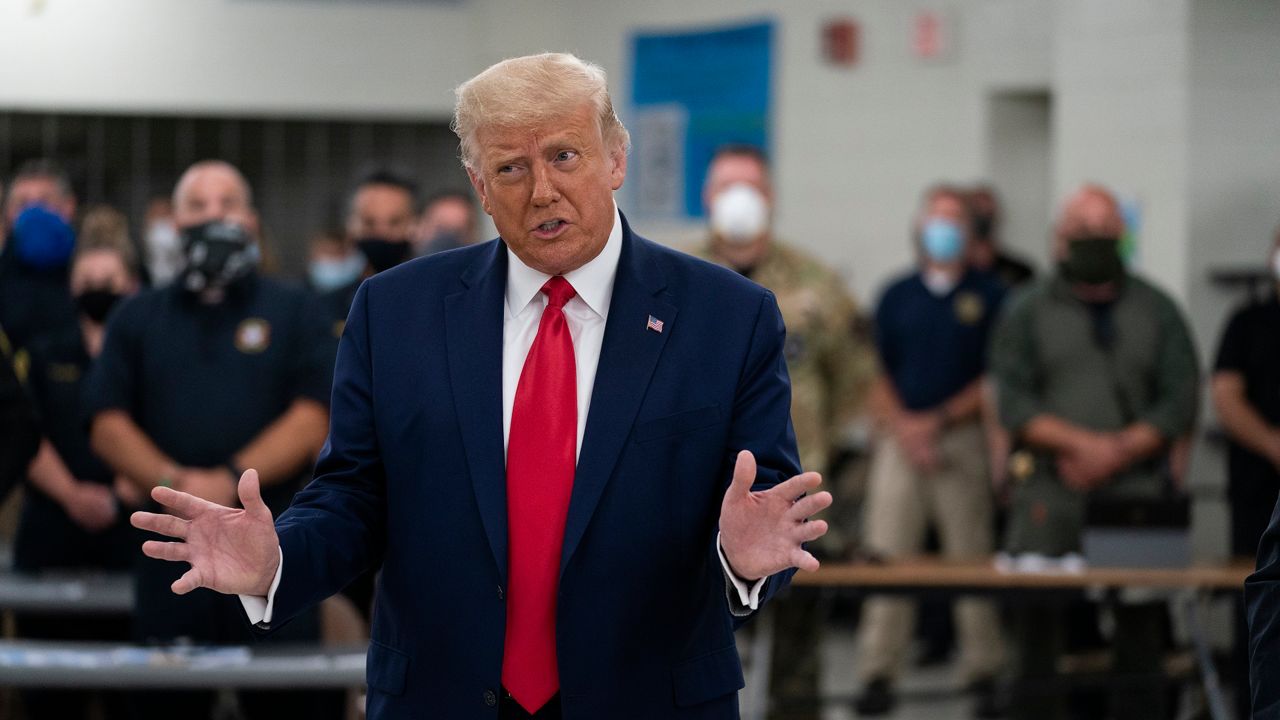 KENOSHA, Wis. (SPECTRUM NEWS) — The police shooting of Jacob Blake and ensuing civil unrest have turned Kenosha, Wis., into the latest focal point for issues of racial justice. On Tuesday, all eyes remained on Kenosha as President Donald Trump made a visit that sparked a wide range of reactions.

Trump’s visit came as the intense unrest from last week had quieted down into peaceful protests and community efforts to rebuild. The president, who has repeatedly criticized Gov. Tony Evers’ response in Kenosha, spent the day meeting with local leaders, surveying damage in the city, and speaking at a roundtable on community safety, where he defended police and pledged $42 million to “support public safety statewide.”

Evers and Kenosha Mayor John Antaramian had both discouraged the president from visiting, with the mayor saying “the timing is wrong” as the city works to heal.

But Republican lawmakers Sen. Ron Johnson and Rep. Bryan Steil, both of whom criticized Evers’ response and pushed the governor to accept federal aid, released statements in support of Trump’s visit.

“President Trump answered my call when help was needed in Kenosha. Now he wants to thank the men and women who helped restore public safety in our community of Kenosha,” Steil said in his statement Tuesday morning. “It’s positive he is coming to thank them and to help begin the process of healing and rebuilding our community.”

Both lawmakers participated in the afternoon’s roundtable, expressing their gratitude for the efforts of the federal government and law enforcement. Local officials, including Kenosha County Sheriff David Beth, also thanked the president for his support during the roundtable conversation.

“Thank you for being the president that likes law enforcement,” Beth said. “On behalf of law enforcement, I’m telling you, the group that’s here — I hope you could feel the love that they have for you and everybody who came.”

Democratic Sen. Tammy Baldwin had a different message for the president. In her own statement, released early Tuesday, Baldwin criticized Trump’s leadership and called for action on police reform bills that have stalled out in the Senate.

“This president has not provided leadership that unites people and he has a bad habit of being divisive, which is not what the Kenosha community and Wisconsin wants or needs,” Baldwin said in her statement. “I want President Trump to do what Jacob Blake’s mother, Julia Jackson, has asked every American to do – examine your heart.”

Rep. Mark Pocan, who is from Kenosha, also criticized Trump in a press conference Tuesday morning, saying that the city needs unity while the president is creating “just the opposite.” And Senate Minority Leader Chuck Schumer took to Twitter to criticize the president as “part of the problem” when it comes to inciting violence.

What Joe Biden reminded us yesterday is that Donald Trump wants you to live in fear.

That is not who we are.

Donald Trump is going to keep advertising himself today from Kenosha as some figure of LAW & ORDER.

He’s been part of the problem, not the solution.

Throughout the day, Trump met with National Guard members in the city, business owners who had faced damage from last week’s unrest, local law enforcement, and Blake’s mother’s pastor.

He did not, however, meet with Blake’s family directly. At a Monday press briefing, the president said the family had asked to have lawyers involved with the meeting, which he thought was “inappropriate.”

Some of Blake’s family members still came to Kenosha during the day. Justin Blake, Jacob’s uncle, spoke at a press briefing hosted by civil rights leader Rev. Jesse Jackson. He reiterated the family’s request that protesters speak out peacefully, in a mindset of unity instead of anger.

“All I ask is that [Trump] keep his disrespect, his foul language, far away from our family,” Justin Blake said. “We need a president that’s going to unite our country and take us in a different direction.”

Jackson himself encouraged crowds to focus their efforts on serving the community instead of protesting the president, whom he said was empowering militias by refusing to denounce the actions of Kyle Rittenhouse, the 17-year-old charged with killing two protesters last week.

Blake’s family, along with local organizers, spent the day hosting a “community celebration” at the site of the police shooting. Rather than a direct protest of Trump, the event featured a number of activities including a community cleanup, voter registration, healing circle, COVID-19 testing, and a bounce house.

Actor Mark Ruffalo, who is from Kenosha, also hopped on Instagram Live to talk about his hometown and speak with some of the organizers of the community celebration, including leaders from the newly formed Black Lives Activists of Kenosha group. Ruffalo emphasized the importance of peaceful demonstration.