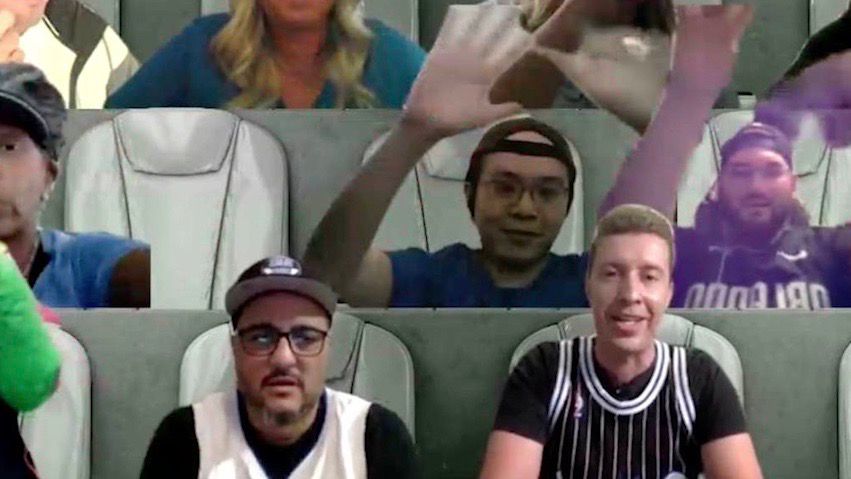 It’s hard to imagine a NBA Playoffs without fans.  Going on the road for a game seven is one of the tallest tasks in sports.  You won’t see that kind of home court advantage this post season due to the coronavirus, but the NBA is doing its best to create a home game feel.  If you’ve watched a Magic game on TV or any NBA game during the re-start you’ve probably seen fans projected in digital seats on giant video boards in the arenas.

“It’s an interesting way to view game I’ve done a couple of them,” Shelly Wilkes said.   “You feel kind of strange cheering at your computer screen.”

Wilkes is the Magic’s Senior Vice President of Marketing and Social Responsibility.  Her staff is helping create a virtual experience for fans at Magic games inside the NBA Bubble.

“Right now it is filled with season ticket holders, our partners and a lot of our players family and friends,” Wilkes said.

You can’t buy a ticket, but there are several contests available for fans to win a chance to “attend” a game.  The idea started as part of a NBA partnership with Microsoft to give fans as much access as possible in a virtual world.  The experience starts with the Microsoft Teams video conference application which allows you to watch the game and cheer with up to 32 people in your virtual seats.

“It felt nice being with other Magic fans and like interacting with them,”  Simon Dharmakirthi said.  “Especially with Coronavirus, you can’t go out and meet people so it was a nice experience.”

Dharmakirthi was surprised by an email invitation.  So were fellow super fans Omar Hafizbegovic and Shalissa Pereira

“You can see everyone here this is my section,” Pereira says as she points to the display on her computer screen.

She was sent a link from the NBA to her “seat.”  Once she logged into the Microsoft application, moderators from the league helped her set up the program.  You see the live game feed on one side of the screen and your section of seats on the other.

“It kind of felt like I wasn’t away from Amway.  Just being around them it made me happy,” Pereira said

“It was definitely a cool experience, very memorable for sure,” Hafizbegovic said.

As fun as the virtual experience is, there’s still no substitute for the real thing.  The NBA is planning to begin the 2021 season in December pending negotiations with the players association.  Wilkes says the Magic are preparing as if they will be hosting real fans at Amway again.

“We are going as if we are going to start with fans today,” Wilkes said.  “We are planning for signage, for safety,  for cleanliness… we can always scale back from that, but we need to be scaled up as much as possible.  You can always go backwards, it’s really hard to add things in afterwards.  We want to make sure that if were to start today what are the things that we would need to put into place today.  And once we actually start having fans in the building we can make decisions on where we are as a country, where we are as a city, and scale back from there if needed.”