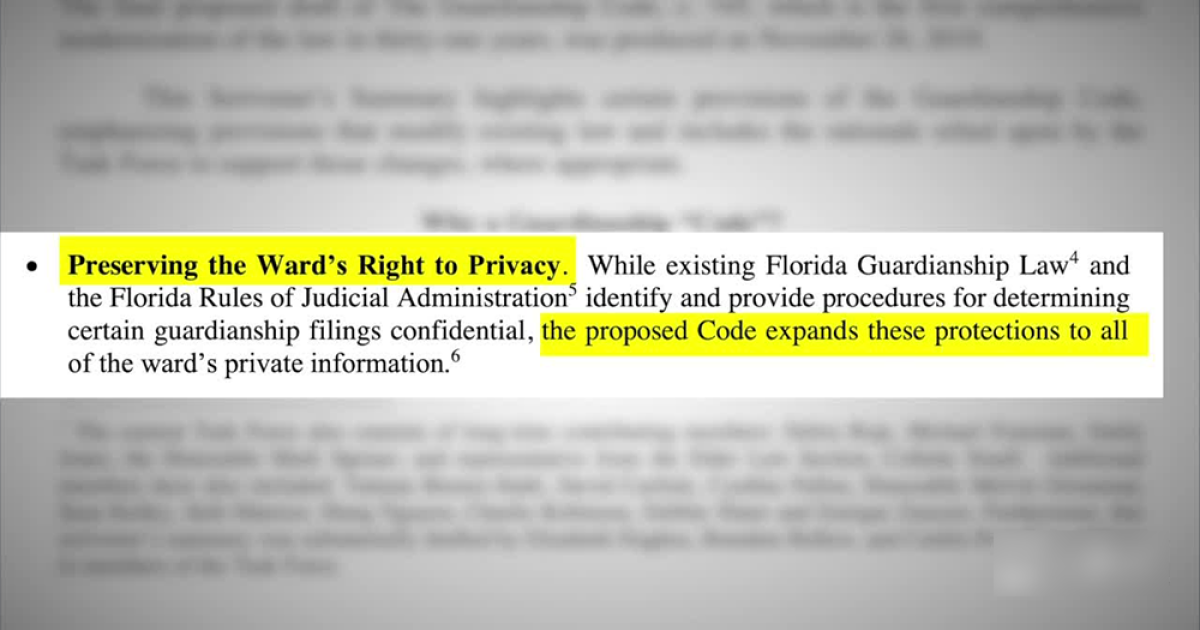 TALLAHASSEE, Fla. — Thousands of Floridians are under court-ordered guardianship, a system in which a judge declares a person — called a ward — to be incapacitated, takes away that person’s rights, then assigns a professional guardian to take over their lives.

The guardian and their attorney are then paid from the ward’s assets for their services.

For more than seven years, the ABC Action News I-Team has combed through thousands of court records, exposing lots of instances of exploitation and abuse of vulnerable seniors by their court-appointed guardians.

Now some of the attorneys who represent those guardians are trying to make it more difficult for the public to find out what’s going on in those cases.

“I can dress myself, I can take a shower, I can walk,” 99-year-old Willi Berchau told us in 2013, as he begged the I-Team to help free him from an Alzheimer’s unit in an assisted living facility where he had been placed by his professional guardian.

He had been declared incapacitated three times by a judge but was continuing to try to get his rights restored.

Our findings included guardians selling homes, cars and other property under market value without appraisals.

In some cases, court records showed patterns in which homes were sold multiple times in the same day, benefiting associates of the guardian, but not the ward who they took an oath to represent.

We found guardians seeking “Do Not Resuscitate Orders” without alerting judges or family members.

We uncovered guardians pre-paying for wards’ cremations, even though they already owned burial plots and cremation violated their religious beliefs.

And we found multiple cases in which guardians financially exploited people they were appointed to provide care for.

THE PRICE OF PROTECTION

But an overhaul of the Florida Guardianship law proposed by the Real Property, Probate and Trust section of the Florida Bar could prevent the public from learning what goes on in individual guardianship cases in the future if their recommendations are enacted into law

“For the last six years, we studied the code, we looked at what’s being done nationally,” said Bill Hennessey, who chairs the committee that is making the recommended changes.

That committee recommends measures aimed at preserving the ward’s right to privacy.

Currently, things like health and financial records are kept confidential, but the new proposal expands these protections to all of the ward’s private information.

That includes records that show who is buying wards’ property and at what price, how much guardians and their attorneys are billing wards, how often guardians actually visit their wards and whether a ward asks the court to be re-evaluated and released from guardianship.

That happened in Willi Berchau’s case and he was eventually freed from guardianship.

“The issue here that we’re always going to try to balance is dealing with a person’s privacy and dignity versus this issue of the good things that happen when you open the court files,” said Hennessey.

He says often confidential information is not sealed, subjecting the wards to embarrassment or potential exploitation.

“The best the Bar can do is let’s hide more records?” said Guardianship Reform advocate Rick Black, who runs an organization called the Center for Estate Administration Reform, or CEAR, which fights abusive guardianships nationwide.

Black says recent arrests of guardians in Florida proves there are lots of problems not addressed in the current law, and he thinks the section of the bar proposing the reforms should consult with victims’ families to develop new rules.

Let’s document what really has gone on and what allowed those four, who have been criminally arrested to flourish within this system that would appear to be more about profiteering that protection.

Hennessey says the new law addresses plenty of issues aimed at protecting wards and he looks forward to working with others to come up with a final version of the law.

“We all need to be working together to protect these folks. And we’re going to have a good dialogue together in the legislature,” he said.

The proposed new rules will first have to be approved by the Florida Bar Board of Governors.

Then that section of the bar will lobby legislators to draft a bill for the next session.

The section dealing with reform of the guardianship statute begins on page 240.

If you have a story you’d like the I-Team to investigate, email us at adam@abcactionnews.com