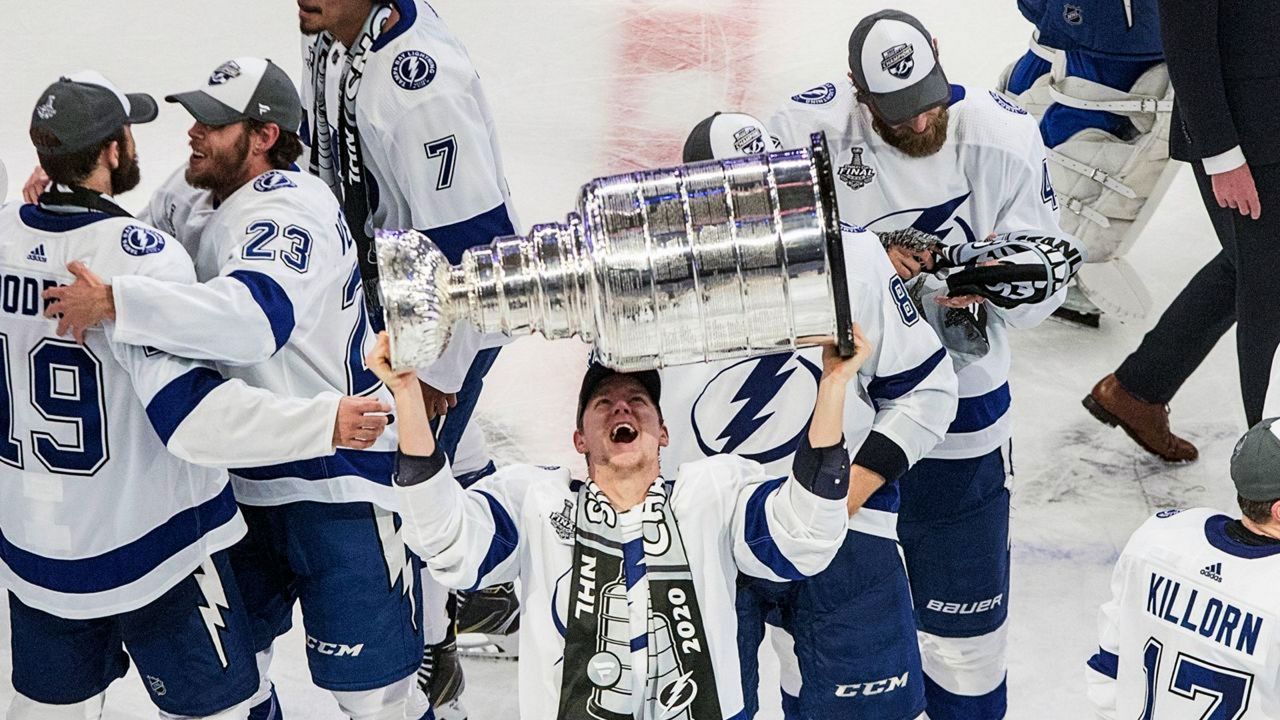 HILLSBOROUGH COUNTY, Fla. — The Tampa Bay Lightning is making that 2,800 mile trip for home and will be back in Tampa around 5 p.m., Tuesday. And they are coming home victorious: They have won their second Stanley Cup.

It’s a beautiful morning outside of Amalie!

Want to celebrate? Here’s how:

– Wednesday at 5 p.m. there’s a Stanley Cup boat parade on the Hillsborough River. Fans can watch from the riverwalk.
– Following at 7:30 there’s a celebration at Raymond James Stadium ⁦@BN9⁩ pic.twitter.com/BTqJL5mDA0

The triumph of winning the NHL championship in a bubble was certainly no less sweet for the Tampa Bay Lightning.

Brayden Point scored his playoff-best 14th goal and the Lightning beat the Dallas Stars 2-0 in Game 6 on Monday night to win finish off the most unusual NHL postseason in history, staged nearly entirely in quarantine because of the pandemic

But when they return home to Amalie Arena in Tampa, there will be an on-ice celebration with their families and Lightning staff.

But the celebration started earlier on Monday night, when Bolts fans realized the team would be taking the cup back to Tampa.

The fans at Thunder Alley just erupted when the Bolts won the Stanley Cup, with about 1,000 people were outside of Amalie Arena.

It’s been 16 long years since the Lightning have brought the cup back home to Tampa;

“I’ve been waiting for so many years. This is from like 12 years ago, I’ve been wearing this jersey. All the time. So, I love it. I’m excited,” said fan Saverio Digioa.

“I’m absolutely fired up. This team has deserved this win, the Stanley cup win since 2015. We’ve been through injuries, we’ve been through I think it all and there’s not one team right now that deserves the cup more than the Tampa Bay Lightning,” he said.

There are a few ways you can celebrate.

On Wednesday, there will be a Stanley Cup Champions Boat Parade on the Hillsborough River at 5 p.m., where fans can see it from the Riverwalk.

For the boat parade, officials want people to wear a mask and stay socially distant while watching from the Riverwalk.

Then at 7:30 p.m., there is a celebration at Raymond James Stadium. It is ticketed but those tickets are free.

People can start claiming them on Tuesday at 1 p.m. at Ticketmaster’s website.

The Associated Press contributed to this story.

0 0 0 0
Previous : Florida Poll workers being trained after a huge response to recruitment efforts
Next : Cold front moves in Tuesday night with huge drop in humidity