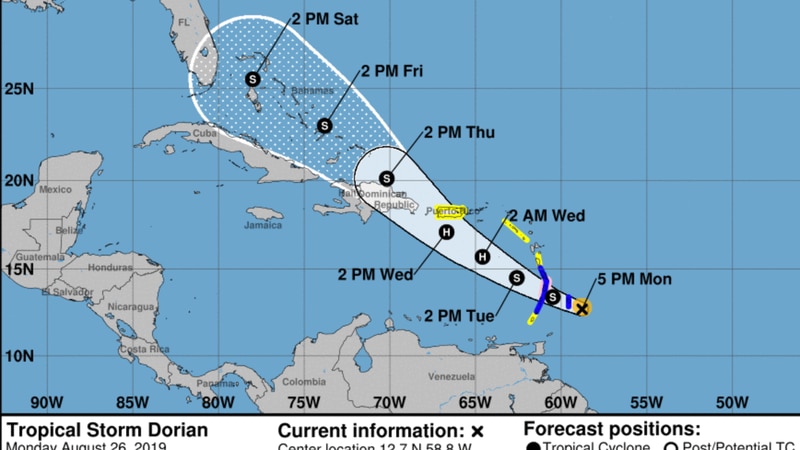 Tropical Storm Dorian is projected to strengthen into a hurricane on Tuesday. If the storm continues to gain intensity the latest track shows a Hurricane Dorian could start menacing Florida by this weekend, according to the National Hurricane Center.

Dorian and its 60 mph winds could become a Category 1 hurricane with 80 mph winds by Wednesday, forecasters say, as it passes near Puerto Rico, the Dominican Republic and Haiti.

Tropical-storm force winds could be felt in South Florida as early as Friday, and Puerto Rico has already issued a tropical storm warning to its residents.

The hurricane center’s latest projection then shows the storm heading toward the Bahamas and South Florida by Saturday evening.

“We’re just telling people to keep an eye on it over the next five to seven days,” National Weather Service forecaster John McMichael said. “Right now it’s too far out to tell if it will survive its trek over the Caribbean.”

“While uncertainty is high, wind and rain impacts are possible in the Bahamas and Florida later this week and this weekend,” said the hurricane center’s 5 p.m. Monday bulletin. “Residents in these areas should monitor the progress of Dorian and ensure that they have their hurricane plan in place.”

Dorian’s center was located about 60 miles east-southeast of Barbados and 165 miles east-southeast of St. Lucia on Monday, according to the hurricane center. The storm continued to move west-northwest at 14 mph with maximum sustained winds near 60 mph, and tropical-storm-force winds and wind gusts extending as far as 45 miles from its center.

If Dorian becomes a hurricane by Tuesday, it’d have almost two days in open water to strengthen before hitting land ― either the Dominican Republic or Puerto Rico.

The hurricane center’s projections show the storm is most likely to pass over the Dominican Republic on Thursday, where wind sheer and mountains could weaken it. The storm was initially supposed to hit the Bahamas as a depression Friday, but is now likely arrive as a tropical storm.

Forecasters also project a Hurricane Dorian moving along a more easterly path, meaning it could hit Puerto Rico instead, or miss landfall altogether before entering the Bahamas.

There are still too many “what ifs” to get a clearer picture of the storm’s future strength and path, particularly with how it might impact Florida. Current forecasts show the most likely impact could be tropical storm-like conditions in South Florida.

Odds of Dorian impacts to Florida have increased in the latest advisory. No change to your planning. Get what you need ahead of the public rush to the stores. It’s not a hurricane thing, it’s a life in Florida thing when the cone is over you. #SetzerSays @CBSMiami pic.twitter.com/bPsLUmdGJj

Dorian formed into a tropical storm, the fourth of this season, this past weekend. It outpaced a low-pressure system that moved up the Florida coast over the weekend and is now almost 300 miles off the coast of North Carolina.

The system’s center moved over southeast Florida but then pushed out into the Atlantic as it headed north. That system is still highly likely to form into a tropical cyclone within two days but should keep moving east into the Atlantic.

Dorian would become the second hurricane of the season. In July. Hurricane Barry hit Louisiana as a Category 1 storm.

HURRICANE SEASON IS HERE: Get ready and stay informed at tampabay.com/hurricane

PREPARE YOUR STUFF: Get your documents and your data ready for a storm

BUILD YOUR KIT: The stuff you’ll need to stay safe — and comfortable — for the storm

PROTECT YOUR PETS: Your pets can’t get ready for a storm. That’s your job

NEED TO KNOW: Click here to find your evacuation zone and shelter

What Michael taught the Panhandle and Tampa Bay

What the Panhandle’s top emergency officials learned from Michael

‘We’re not going to give up.’ What a school superintendent learned from Michael

What Tampa Bay school leaders fear most from a storm

Tampa Bay’s top cops fear for those who stay behind