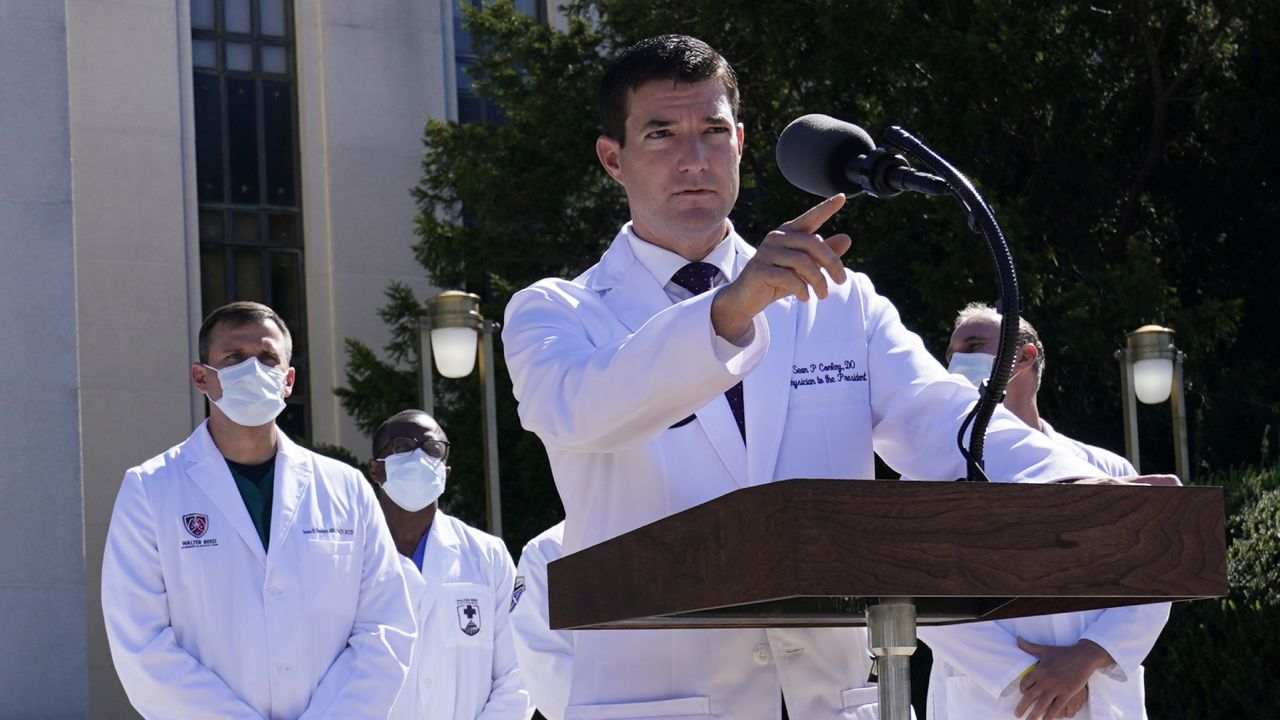 WASHINGTON — A source familiar with President Donald Trump’s health said that “the next 48 hours will be critical in terms of his care.”

That conflicts with Trump’s physician’s report that the president is doing “very well” a day after being admitted to Walter Reed Medical Center, his physician said Saturday.

The president, who revealed he tested positive for COVID-19 early Friday, traveled to the hospital later the same day. The White House said his visit to Walter Reed is precautionary, and he will be able to work from the medical hospital. According to the Associated Press, he has not transferred power to Vice President Mike Pence under the 25th Amendment of the U.S. Constitution.

“At this time the team and I are extremely happy with the progress the president has made.” Dr. Sean Conley told reporters outside of Walter Reed Medical Center. “Thursday he had a mild cough and some nasal congestion and fatigue, all of which are now resolving and improving.”

Dr. Sean Dooley, another member of the president’s medical team, added that the president told him he felt like he could, “Walk out of here today,” soon before the doctors delivered the update to reporters.

A source familiar with the president’s health told a reporter covering the president that “the president’s vitals over the last 24 hours were very concerning and the next 48 hours will be critical in terms of his care. We’re still not on a clear path to a full recovery.”

The doctors would not answer several specific questions regarding the president’s health, including when his last negative test for COVID was conducted. When asked if the president had ever received oxygen for his condition, Conley responded: “Right now, he is not on oxygen.”

After being pressed on whether the president had been on oxygen at any time during his stay at Walter Reed, Conley said, “Yesterday and today, he was not on oxygen.”

Meanwhile, a source told the Associated Press that President Trump was given supplemental oxygen at the White House on Friday before going to Walter Reed Military Medical Center.

The team added that the president has been fever-free for over 24 hours, but they will continue to monitor him closely.

Some of the team’s statements sparked concern that they weren’t being transparent about the president’s health. During his address, Dr. Conley said that the president is “72 hours into his diagnosis now,” meaning the president would have received his positive test results on Wednesday. Trump did not share the news of his diagnosis until early Friday morning.

The president attended two events between Wednesday and Friday.

The White House attempted to clarify Dr. Conley’s remarks, with an official saying that Dr. Conley meant that the president is on his day three of his diagnosis, rather than 72 hours.

Earlier in the day, the president shared an update on his health on Twitter, writing: “Going welI, I think! Thank you to all. LOVE!!!”

On Friday, the president was given the drug Remdesivir to treat his symptoms, which the White House described as “mild.”

The experimental antibody drug given to President Trump has been called one of the most promising approaches to preventing serious illness from a COVID-19 infection.

Its maker, Regeneron Pharmaceuticals Inc., said the company agreed to supply a single dose, given through an IV, for Trump at the request of his physician under “compassionate use” provisions, when an experimental medicine is provided on a case-by-case emergency basis, while studies of it continue.

The new drug is in late-stage testing and its safety and effectiveness are not yet known. No treatment has yet proved able to prevent serious illness after a coronavirus infection.