REYNOSA, Mexico — Guatemalan refugee Fernando Vasquez unzips the front side of the small, two-person tent he shares with his sick daughter. Inside the seven-year-old girl sleeps.

“My daughter Nina has a lot of leg pain and she’s not eating. That’s what worries me the most,” he said.

For two months Vasquez and his daughter journeyed together by bus, hitchhiking by foot to reach the southern border of the United States.

Without a real plan of how to get into the U.S., together with his sister-in-law and three other children, Vasquez and his daughter chose to cross the dangerous and often unforgiving Rio Grande to get into the country.

“I don’t know where we were,” the soft-spoken man said.

Vasquez assumes they jumped in the river somewhere near Reynosa, Mexico, near the Texas city of McAllen. The brush was thick and once they were close to the river, a young man on the same trail said they should cross in the spot where the group ended up.

After surviving the currents and reaching dry land, Vazquez said the U.S. border patrol agents were quick to make contact with the migrants.

“My sister-in-law and her kids were separated from me and we all were taken to a detention facility,” he said.

The Central American man said he and his daughter were kept together in a room for three hours, before government officials escorted them to a van and took them to an international bridge. Vasquez said the agents told him very little and asked only to see identification and proof he was the father of the little girl.

The father and daughter ended up in the Reynosa plaza near the Hidalgo International Bridge on Saturday. 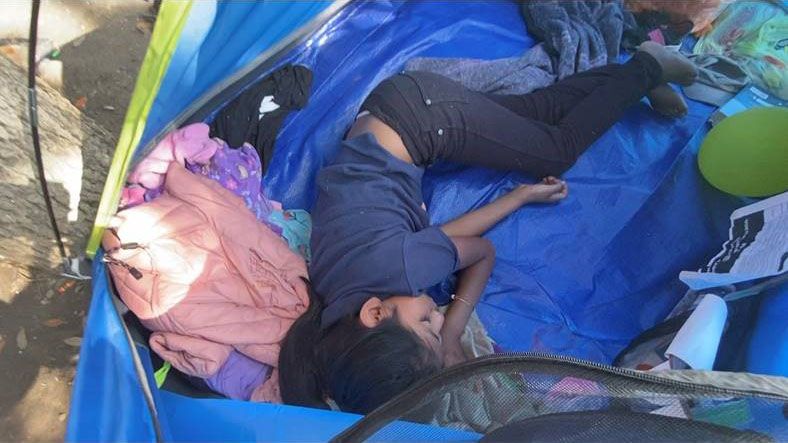 In March, U.S. government data shows immigration agents removed roughly a third of parents and children caught entering the country without permission. Those numbers are contrary to President Joe Biden’s claim that ICE is kicking out most of the families picked up by border agents.

“We’re sending back the vast majority of the families that are coming,” Biden said during a March 25 press conference.

Vasquez said he doesn’t understand how the asylum process works and believed he and his daughter would be allowed to stay in the U.S.

“I have no idea how I can figure it out to make it inside your country,” he said.

The father expresses concern for his daughter’s heath and worries that medical attention may arrive too late.

“If she dies I will blame myself for leaving home, thinking we’d find something better,” Vasquez said.