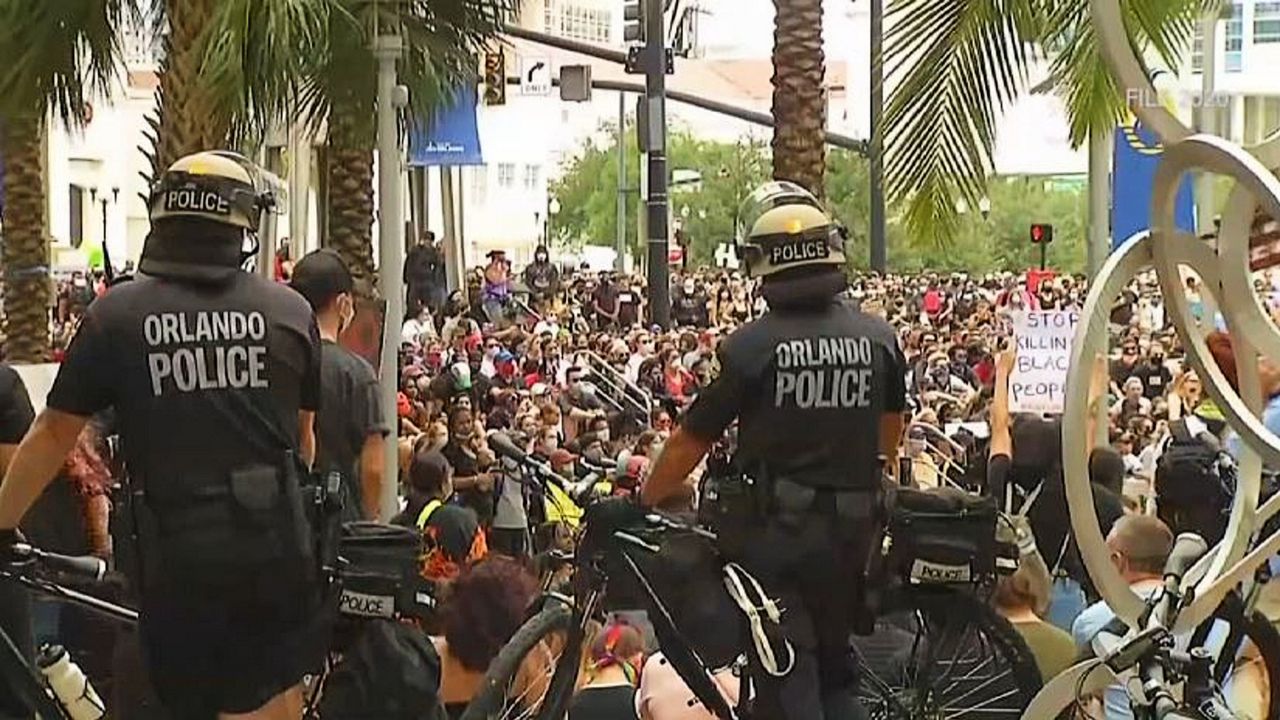 Backed by sheriffs, police chiefs and the incoming Senate president and House speaker, DeSantis said the state is going to get tough on anyone who participates in disorderly protests that cause property damage or injury.

The proposed package would also strip municipalities of state money if they defund law enforcement.

It would also create new penalties for people who harass people in restaurants, who tear down monuments or damage or destroy public property during a violent assembly. People from out of state would face enhanced penalties for participating.

In addition, hitting a law enforcement officer, including with an object, during a violent or disorderly assembly would be a six month mandatory minimum jail sentence.

“Recently, in our country we have seen attacks on law enforcement, we’ve seen disorder and tumult in many cities,” DeSantis said. “This has been a really, really sad chapter in American history.”

While DeSantis says his intentions are to keep communities safe, some people believe this bill will do the opposite.

“Shame on you Governor DeSantis, shame on you,” Lawanna Gelzer, co-founder of the Movement Coalition, said. “And you’re an attorney, so you should know better.”

Today I announced bold legislation that creates new criminal offenses and increases penalties for those who target law enforcement and participate in violent or disorderly assemblies. We will always stand with our men and women in uniform who keep our communities safe. pic.twitter.com/ITl5GmmrZJ

Gelzer said the timing and intent of the bill fell far out of line.

“Why now?” she asked. “And give me one example of the violence that you’re talking about, because it hasn’t happened in the state of Florida.”

The idea of punishing municipalities that cut funding from their police department is misguided, Gelzer said.

“It’s never been about defunding,” she said. “It’s about reallocating the funds to a proper category to best serve the citizens, and to make sure we’re protected.”

In a bill meant to protect local communities, Gelzer thinks it reads more like a scare tactic meant to tie the hands of local governments.

It is like Desantis is saying, “If you don’t do what I want you to do, I’m gonna take your money. So don’t defund the police,” she said.

While DeSantis said Florida has not seen the type of violent protests that have occurred in other states, he said he wants to make sure they do not happen.

“We need to do more in terms of a strong legislative response so we do not always have to play whack-a-mole any time you have situations like this develop,” DeSantis said.

Gelzer said focusing on a problem that doesn’t exist in the state of Florida means turning a blind eye to problems that need the most attention.

“People still need their unemployment, people are losing their jobs, businesses are closing,” she said. “Why are you electing to use and waste tax dollars on this fight.”​

Spectrum News reporter Justin Soto and the Associated Press contributed to this story.

0 0 0 0
Previous : Zombie Storm: Paulette Comes Back to Life
Next : University of Tampa tops 216 COVID-19 cases in students since classes started in August