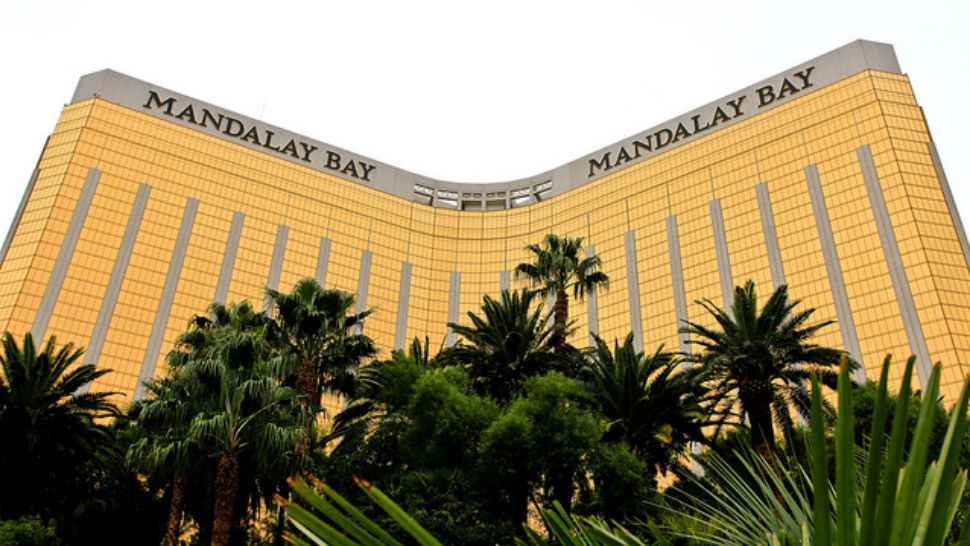 LAS VEGAS — The sun rose Thursday over a somber ceremony marking the third anniversary of the deadliest mass shooting in modern U.S. history, as Las Vegas remembered the excruciating night when 58 people were killed at an outdoor country music festival in 2017.

“Three years ago today, a heinous act of violence rained down on our city, our county and our state,” Nevada Gov. Steve Sisolak told a modest gathering at an open-air amphitheater at the Clark County Government Center. His voice cracked with emotion behind his coronavirus face mask as he recalled “everyone involved that helped us get through those tragic times.”

The ceremony drew perhaps 200 survivors, friends and elected officials. Plans to host no more than 50 people expanded on Tuesday to allow up to 250 when the governor, a Democrat, relaxed some statewide COVID-19 pandemic crowd restrictions.

Authorities said more than 850 people were injured in the attack by a lone shooter firing from upper-floor windows of the Mandalay Bay resort into an outdoor crowd of 22,000 attending the Route 91 Harvest Festival. Police later said 413 of the injured suffered bullet or shrapnel wounds, others were injured fleeing the concert venue.

Clark County Sheriff Joe Lombardo announced Thursday he was raising the department’s death toll from the shooting to 60. He drew local criticism in recent weeks for refusing to increase the number despite coroners’ rulings that two women died during the past year of wounds received three years ago.

“We are all a statistic,” Albert Rivera, father of slain 21-year-old Jordyn Rivera, told the amphitheater audience. “We are all part of this unwanted fraternity that we didn’t choose to be a part of. But because of this tragedy, a new family was born.”

Rivera, of La Verne, California, also marked the death in May of Greg Zanis, a carpenter from Aurora, Illinois, “who took it upon himself to build a simple white cross for each precious life lost.”

Images of the crosses in front of the famous “Welcome to Fabulous Las Vegas” sign became an iconic reminder of the shooting.

“I, for one, will always be changed because he wanted to do something for the families,” Rivera said of Zanis.

“On behalf of the President and his Administration, our hearts continue to break for the victims and their families. They are in our prayers today.” pic.twitter.com/cgmPbNr8Wi

“Our hearts continue to break for the victims and their families,” she said. “They are in our prayers today.”

Democratic presidential nominee Joe Biden issued a statement calling the shooting “an act of pure malice, and yet another appalling act of gun violence – the kind that takes the lives of 100 Americans every day.”

“Rather than let tragedy define the city, Nevadans did what you always do in hard times,” the former vice president said. “You were resilient.”

Biden’s running mate, Kamala Harris, marked the anniversary on Twitter and called to honor the victims by ending the gun violence epidemic.

It’s been three years since our nation was rocked by the worst mass shooting in modern American history. 60 precious lives were cut short in Las Vegas, leaving behind families who will never be the same.

Let’s honor their lives and bring an end to the gun violence epidemic.

Remembrances around Las Vegas ranged from a lawmaker setting out on a 36 mile fundraising run to blood drives to an invitation for survivors of the shooting to get tattoos.

The city’s mayor was due to host an after-dark reading of the names of the dead at a commemorative garden beginning at 10:05 p.m., the time the shooting started.

Authorities said gunfire lasted than 10 minutes and the shooter took his own life before police blasted through doors that had been bracketed shut at his suite on the 32nd floor of the Mandalay Bay.

The gunman had assembled a cache of assault-style weapons fitted with rapid-fire “bump stock” devices and high-capacity magazines.

Las Vegas police and the FBI found that he meticulously planned the attack and said he acted alone. They theorized that he sought notoriety, but said they never determined a clear motive for the attack.

A Nevada judge on Wednesday signed off on a broad settlement involving MGM Resorts International, corporate owner of the hotel and the concert venue, and lawsuits involving more than 4,000 plaintiffs.

Victims and families are due in coming months to receive a total of $800 million in compensation, while the company acknowledges no liability. It will pay $49 million and its insurance companies will pay $751 million.

MGM Resorts had faced dozens of lawsuits in several states accusing it of failing to protect the concert crowd or stop the gunman from spending several days amassing his arsenal of weapons and ammunition before opening fire.