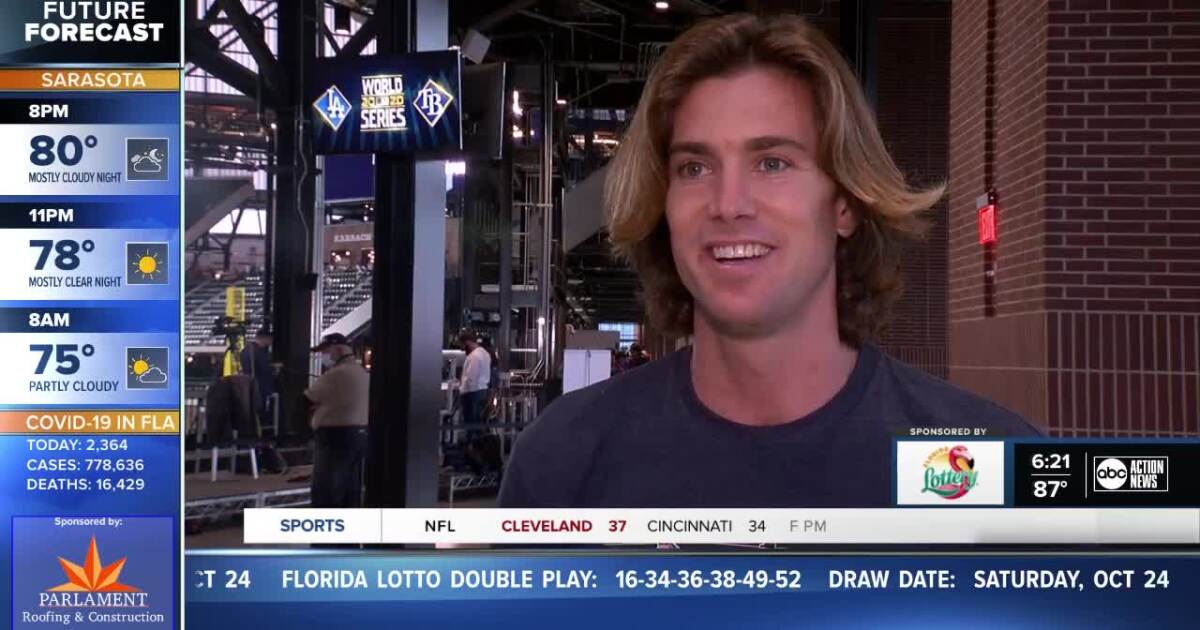 ARLINGTON, TX — It took the Tampa Bay Rays making all the way to the World Series to play in front of family members for the first time this season. Fans were not allowed to attend games in the regular season due to COVID-19 protocols.

Rays starting pitcher Tyler Glasnow made the start in game one and his older brother, Ted, made the trip from California see Tyler on the big stage.

“We text, we Zoom, we hang out,” Ted said. “Obviously not this season.”

Ted and Tyler are more than brothers, they’re best friends. Tyler was even the best man at Ted’s wedding last year. The brothers have many of the same cadences and matching long hair. There’s no question they are related.

“This is a dry spell for us,” Ted said. “We’re looking forward to seeing him after the season really no matter the outcome.”

Technology has kept the California kids close, but to see his brother in the World Series is huge, but the Glasnow’s each treat it like any other game.

“It’s a baseball field,” Ted said. “Tyler prepares for it like any other game, at least that’s what he says.”

That’s exactly what Tyler said prior to game one: “It’s going to be like any other baseball game.”

The brothers are tight enough that Ted poked some fun at Tyler after his game one start — an 8-3 Dodgers win. Glasnow was on the mound when Los Angeles’ Mookie Betts stole a base. With that, a Taco Bell promotion won free tacos for everyone in America.

“When he was three years old, I’m the older brother and of course the exceptional athlete, every time I would beat him in something he would go off in the corner and pout,” Ted remembers.

“When you ask him what’s wrong he said ‘I just want Taco Bell.’ So, I think it’s poetic justice he ended up giving Taco Bell to the entire country.”

And, the entire country can’t wait until life is back to normal.

“I don’t know, like hugging someone, seeing family,” Tyler said. “Just being a normal person again.”

“We have trips planned. My wife is excited to hang out with him,” Ted said. “He’s a good dude to be around in the clubhouse or in real life.”

Tyler is expected to start game 5 for the Rays on Sunday.