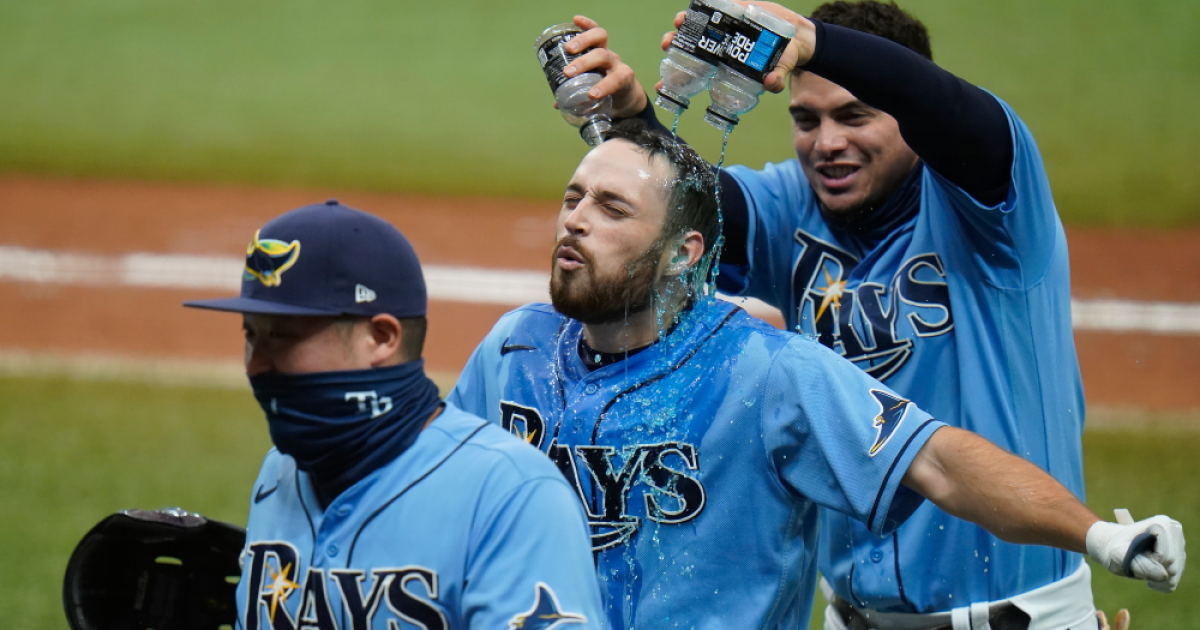 Ji-Man Choi tied the game with an RBI double off Brandon Kintzler (1-3) to begin the 10th and pinch-runner Brett Phillips advanced to third on Michael Perez’s fly to deep center.

Lowe was out of the starting lineup after going hitless in 21 at-bats and lined out as pinch-hitter in the eighth.

“If we go out there, we take care of our business, we’re going to be in good shape,” Lowe said.

Kintzler, who blew his first save in 10 chances, is not a fan of having a runner on second to start extra innings.

Randy Arozarena homered twice and Hunter Renfroe also went deep for the Rays, who avoided losing back-to-back games for the first time since an 0-5 trip from July 29–Aug 2. Tampa Bay has won 22 of 27 games.

“I feel good, I feel very happy to help the team win,” Arozarena said through a translator. “I’m most excited about the victory.”

Matt Joyce slapped an RBI single to center with two outs in the top of the 10th off John Curtiss (3-0) to put the Marlins ahead 4-3.

“You’re definitely probably at a little disadvantage being the road team with a guy at second,” Marlins manager Don Mattingly said. “Even if you score, we see what happens today, they can still bunt. They can still have options on you.”

The Marlins got a two-run first-inning homer from Starling Marte. Corey Dickerson tripled leading off the third and scored to make it 3-1 on Jesús Aguilar’s single.

Arozarena tied it at 3 on his second homer of the game off Trevor Rogers in the sixth. He also hit a solo shot during the first.

Rogers gave up three runs, four hits and had 10 strikeouts in his third career start.

Renfroe homered in the fifth.

Marlins SS Jazz Chisholm singled in the seventh for his first big league hit. He also made an over-the-shoulder running catch in shallow center on Nate Lowe’s flare in the eighth.

Marlins: OF Harold Ramirez, who strained his left hamstring running out a grounder Saturday, was placed on the 10-day injured list. … INF Garrett Cooper (quadriceps) was out of the lineup for the second straight day but pinch-hit in the ninth.

Marlins: RHP José Ureña will make his season debut against Braves RHP Ian Anderson (2-0) Monday in Atlanta. Ureña, out since late July on the COVID-19 list, threw around 80 pitches in his last outing at Miami’s alternate training site.