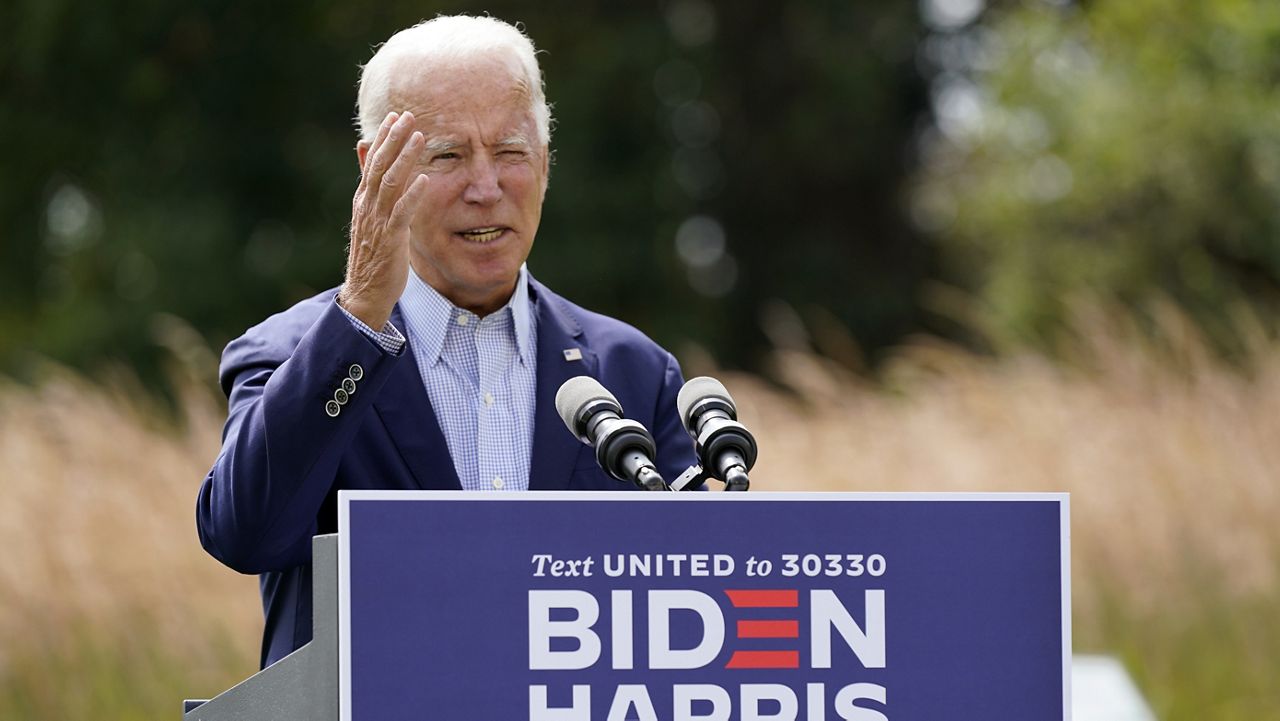 WILMINGTON, DEL. — In an event monday, Democratic presidential nominee Joe Biden said that America is facing “four historic crises all at the same time:” the COVID-19 pandemic, an economic crisis, a reckoning on race, and the subject of the bulk of his speech, the “undeniable acceleration” of climate change.

Speaking from Wilmington, Delaware, Biden slammed President Trump’s leadership on the environment, calling the president a “climate arsonist” ahead of Trump’s trip to California to survey wildfire damage.

“It shouldn’t be so bad,” Biden said, “that millions of Americans live in the shadow of an orange sky and are left asking, is doomsday here?”

The president has been relatively silent about the massive fires ravaging more than a dozen states across the West Coast. Trump has also frequently and vocally expressed his skepticism that climate change is responsible for increasingly dangerous fire seasons across the country.

Over the weekend, Trump reiterated that he thinks the fires are due to poor forest maintenance.

“I spoke to the folks in Oregon, Washington. They’re really having — they’ve never had anything like this. But, you know, it is about forest management. Please remember the words, very simple, ‘forest management,'” Trump said at a campaign rally in Nevada on Saturday.

Biden warned against what a second Trump term would spell for the economy, saying that “Donald Trump’s climate denial may not have caused these fires and record floods and hurricanes, but if he gets a second term, these hellish events will continue to become more common, more devastating, and more deadly.”

“Here’s the deal: Hurricanes don’t swerve to avoid red states or blue states. Wildfires don’t skip towns that voted a certain way,” Biden said. “The impacts of climate change don’t pick and choose. That’s because it’s not a partisan phenomenon. It’s science. And our response should be the same. Grounded in science. Acting together. All of us.”

“If you give a climate arsonist four more years in the White House, why would anyone be surprised if we have more of America ablaze?”

Speaking about his environmental plan, Biden said that “when Donald Trump thinks about climate change he thinks ‘hoax.’ When I think about it, I think ‘jobs,'” going on to detail how his administration would create “good paying union jobs to put Americans to work, building a stronger, more climate-resilient nation.”

He criticized what he called Trump’s failure to embrace green technology, saying that the president has “a mindset that doesn’t have any faith in the capacity of the American people to compete, to innovate and to win.”

In recent weeks, Trump has set out to claim the mantle of environmental steward, specifically when he highlighted conservation and restoration projects during a visit to Florida last week, but his administration has overturned or weakened numerous regulations meant to protect air and water quality and lands essential for imperiled species.

President Trump withdrew the U.S. from the Paris Climate Accord (which Biden has vowed to rejoin), as well as eliminated or weakened dozens of rules that protect the nation’s air and water quality and lands essential for imperiled species, and reversed Obama-era initiatives to fight climate change.

0 0 0 0
Previous : Macy’s Thanksgiving Day Parade Will Not Be Live, Mayor Says
Next : Unsettled Weather Pattern For The Week Ahead