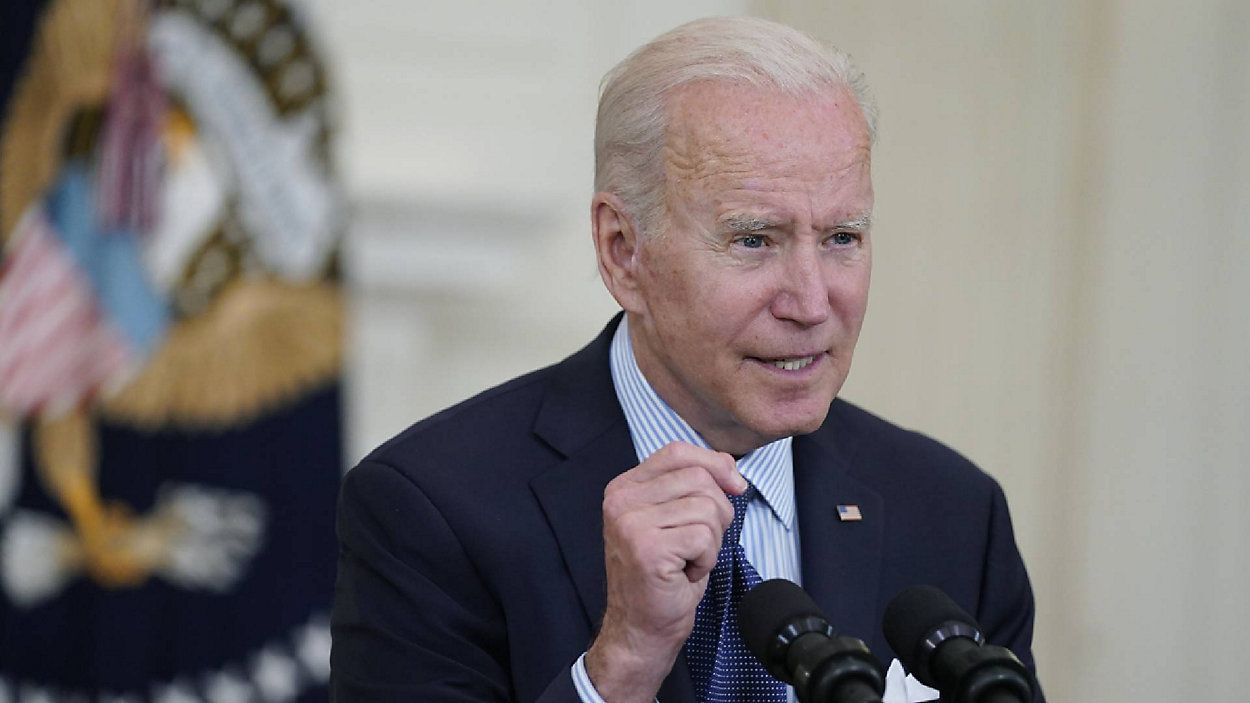 President Joe Biden announced Tuesday afternoon a goal of having 70% of the U.S. adult population get at least one vaccine shot by July 4, and he outlined a new federal strategy that aims to improve access to the shot as a way to maintain the vaccination rate in the coming months.

The president also set an objective of fully vaccinating 160 million Americans — or nearly 50% of the U.S. population — by the same date.

To boost the number of shots ahead of the new goal, the president said he’s directed thousands of pharmacies to offer walk-in appointments and encouraged states to do the same, plus the administration will begin offering more pop-up and mobile vaccination sites and send more doses to rural health clinics in need.

“We’re going to make it easier than ever to get vaccinated,” President Biden said, noting a new federal website, Vaccines.gov, and a new text line that allows people to text their zip code to 438829 to find the shot near them.

“Walk into your local pharmacy without an appointment. Go to the doctor or local health clinic. It’s free. It’s nearby. Every adult is eligible. Go get the shot as soon as you can,” the president added.

Biden also detailed how his administration is prepared to vaccinate Americans 12 to 15 years old, who could become eligible for the Pfizer vaccine in the next few weeks if authorized by the Food and Drug Administration.

The national rate of vaccinations has dipped in recent weeks, in part due to a decrease in demand in some areas of the country.

Asked whether the goal of 70% was too conservative, the president called it “realistic.”

“I’d like to get it to 100%,” he said, answering reporters’ questions after his speech. “By the way, it’s not like July 4, the doors close. It’s just, I’ve picked July 4 to try to get to a place where we get back closer to normal.”

Once a majority of U.S. adults have been vaccinated, infection rates throughout the United States are likely to decrease significantly, a senior administration official said Tuesday.

“That’s the reason why we want to concentrate on getting as many people vaccinated as quickly and as expeditiously as possible,” the official said. “When we do that, the number of cases unquestionably will go down.”

Dr. Anthony Fauci, the president’s chief medical adviser, used the example of Israel in a briefing last month to show the impact of having a majority of a country vaccinated. With more than 60% of people inoculated, Israel saw cases drop to incredibly low numbers and reported zero deaths for the first time.

Still, officials have reiterated the importance of vaccinating the maximum number of Americans as possible, even after the 70% goal is reached.

In his remarks, the president called the choice to get the vaccine a “life and death” decision, speaking directly to Americans who are on the fence and pointing to the history of science behind it.

“There’s one fact I want every American to know: People who are not fully vaccinated can still die every day from COVID-19,” he said.

“Look at the grandparents united with their grandchildren. Friends getting together again. This is your choice. It’s life and death, and I hope everyone knows within themselves and makes the choice that is going to help them and their loved ones be safe,” he added.

On Tuesday, President Biden also explained a new strategy for the Federal Emergency Management Agency to create smaller pop-up vaccination clinics and increase the number of mobile sites “to meet people where they are,” focusing on the “hardest-to-reach individuals,” according to a fact sheet provided by the White House.

“This next phase emphasizes access and making it even easier,” an official told reporters Tuesday.

As the administration begins sending more doses to rural health clinics, the president also announced Tuesday an additional $100 million in funding from the American Rescue Plan to support outreach and vaccine education in rural communities, plus another $860 million for rural providers to “broaden their COVID-19 testing and mitigation to slow the spread of the virus,” according to the White House fact sheet.

“We know that vaccination rates are lower in rural areas,” Biden said.

He also highlighted Tuesday how his administration is set to allocate vaccines for younger teens to pharmacies, local doctors and pediatricians, once authorized by the FDA.

“About half of the federal pharmacy program will be ready to vaccinate 12 to 15 year olds. That’s about 15,000 sites across the country,” a senior administration official told reporters earlier in the day. “So adolescents and their parents can get information about the vaccine from a source of information they trust — their local doctor.”

Administration officials also said that adolescents will be able to get their shot at any location, regardless of where they got their first, an option they confirmed for adults last week.

“The wide cross section of the nation trusts the vaccine regardless of race or ideology,” Biden said. “Now, we need to make the same progress for those under 65 years of age.”