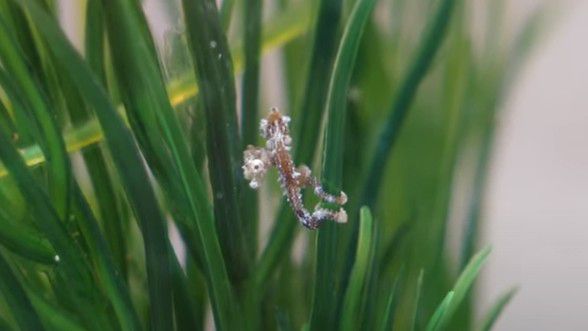 “Unfortunately they did pass away,” Krejci told Spectrum News in an email. “While we are sad about their death and we’re optimistic they would make it, the fact they lived so long was pretty amazing.”

Krejci said she knew of only two other conjoined dwarf seahorses. They died on the days they were born.

“As far as we are aware, they are the oldest surviving conjoined seahorse twins,” Krejci noted.

Seahorses are fish. Dwarf seahorses (Hippocampus zosterae) live in seagrass beds in the Gulf of Mexico, off Florida’s East Coast, and in the Caribbean.

They normally live for about a year. They have S-shaped bodies that grow to about an inch long.

When they reproduce, there’s a bit of role reversal.

Female seahorses deposit their eggs into a male, which self-fertilizes the eggs and holds them in his pouch until birth.

In their third day of life, the conjoined twins grew large enough for experts to document their connection point. They were joined at the mid abdomen. The area contains the intestines and reproductive organs.

Questions remain about the extent of the connection. Were they joined by just skin and bony plates? Or was the connection more substantial?

A necropsy will reveal more about their internal anatomy and cause of death.

“As they grew there was a noticeable size difference between the twins,” Krejci said. “The smaller one began hanging on the larger one rather than on the plants in the tank. It’s possible the strain of these interactions and the demands of growth were too much for them to maintain.”