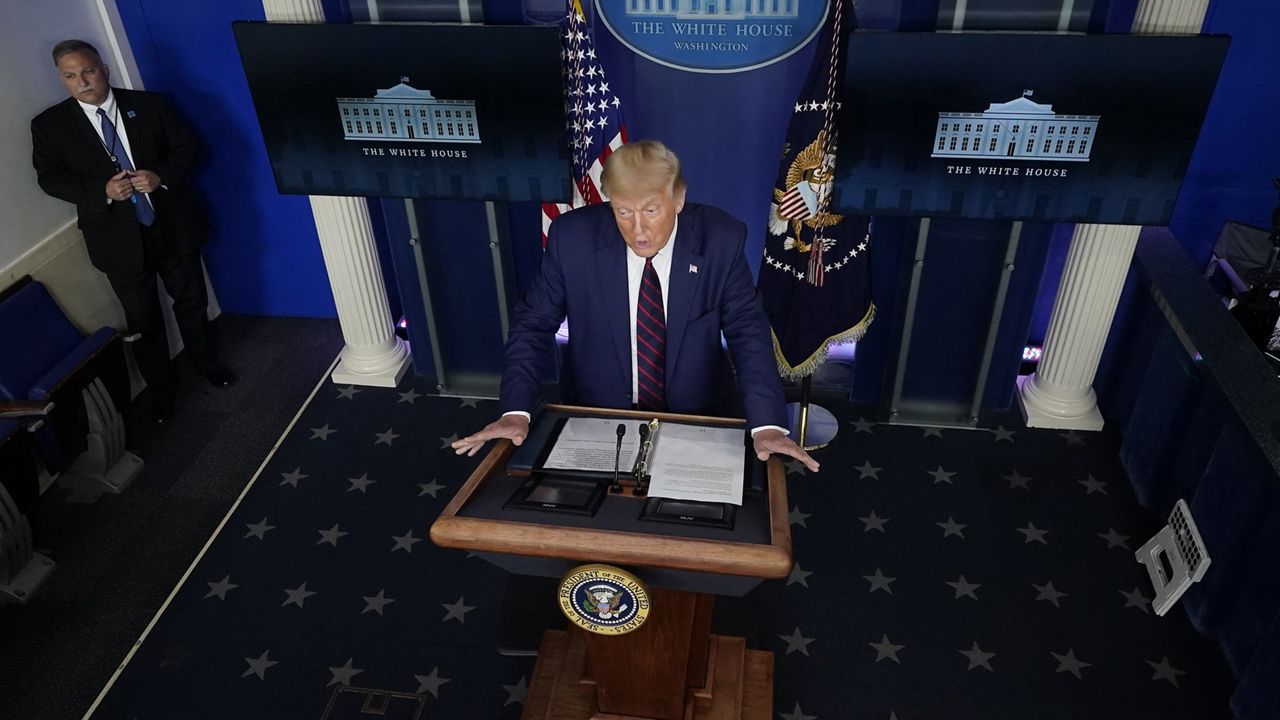 Does anything change in this presidential race?

It’s easy to say no.

After all, for more than 1,300 days, the basic math hasn’t budged: Since he became president, Donald Trump has overwhelmingly had an approval rating of peaking somewhere in the 40-percent range, according to a Real Clear Politics aggregate.

Yet, judging by his swift denial, President Trump clearly sees the recent reporting describing how he allegedly denigrated soldiers, especially those killed in action, as an unusually potent political threat.

He and his supporters have launched an aggressive effort to mitigate the damage since an article landed in the The Atlantic Thursday. It quotes multiple sources stating that Trump considers soldiers who died in World War I as “losers” and “suckers” among other disparaging comments about more recent members of the military; and that, more broadly, “Trump finds the notion of military service difficult to understand, and the idea of volunteering to serve especially incomprehensible.”

The article also gives new details to his contempt for the late Sen. John McCain – reporting that after the Arizona Republican died in August 2018, Trump said: “We’re not going to support that loser’s funeral.”

Other articles, in the Associated Press and Washington Post have confirmed much of the Atlantic’s reporting – with a former senior administration official confirming to The Post “that the president frequently made disparaging comments about veterans and soldiers missing in action, referring to them at times as ‘losers.’”

“I would be willing to swear on anything that I never said that about our fallen heroes,” Trump told reporters on his way back from a Thursday night rally in Pennsylvania, dismissing the Atlantic story.

“It was a terrible thing that somebody could say the kind of things – and especially to me cause I’ve done more for the military than almost anyone, anybody else,” he added Friday, from the Oval Office. Trump also rejected the reporting on McCain, but he publicly stated in 2015 that he didn’t consider McCain a war hero because “I like people who weren’t captured.”

It’s clear why Trump is pushing back: Much of his political image is crafted around being a President who “totally rebuilt the military.” Even minor defections from those in the Armed Forces, who are veterans, or who have emotional ties to the military, could leave him without the political clout to win a second term.

“It could have a small effect – but in a very, very tight election, a small movement could be decisive,” said Peter Feaver, a professor of political science at Duke University who served in the National Security Council under both President Bill Clinton and President George W. Bush.

“If, for instance, North Carolina is as close as the polls indicate it could be and it’s a veteran heavy state, could this move just enough voters in just enough precincts to make a difference? Possibly,” Feaver added. “Which is why the White House responded so vociferously.”

It’s not just the White House responding – Trump’s opponent is too.

His voice rising at a Delaware news conference Friday, Biden alluded to his late son, who served in Iraq and Kosovo, saying “he wasn’t a sucker!”

“The president should humbly apologize to every Gold Star mother and father, to every Blue Star family that he’s denigrated,” the Democrat said. “Who the heck does he think he is?”

If that wasn’t enough, Biden and his allies launched a social media campaign  – aided by a retired Army Major General, whose Twitter post lacing into Trump has garnered at least 3 million views.

The attention on the reported remarks diluted any positive attention the President may have wanted on a substantial news story: the unemployment rate dropping to 8.4 percent from 10.2 percent.

Despite Trump’s reputation as being favored among soldiers, a recent Military Times poll of active duty members of the military showed a slight preference for Biden in the election – 41 percent to 37 percent, with the remainder indicating a third party preference.

The poll, taken before last month’s conventions, also showed about half of respondents had an unfavorable view of President Trump, compared to 38 percent who had a favorable view.

The poll is not a scientific study of all active duty military members, but rather is based off of subscriber information. Still, the numbers are notable because they are the first to show a preference for the Democratic candidate, said Leo Shane III, deputy editor of the Military Times.

“It was a shocking number for us to see,” Shane told Spectrum News, noting members of the military tend to skew conservative.

As for the effect of the recent stories, Shane said it remained to be determined.

“There are certainly some very serious charges against the president for saying things that would be completely insensitive. But I don’t know if the folks who already dislike him will be moved by it. And folks who support the president will probably believe him when he says those charges are false. So it may just be confirmation of whatever side you’re on.”

0 0 0 0
Previous : SeaWorld Permanently Laying Off Some Furloughed Workers
Next : Trump Says Pentagon Will Not Shut Down “Stars and Stripes”