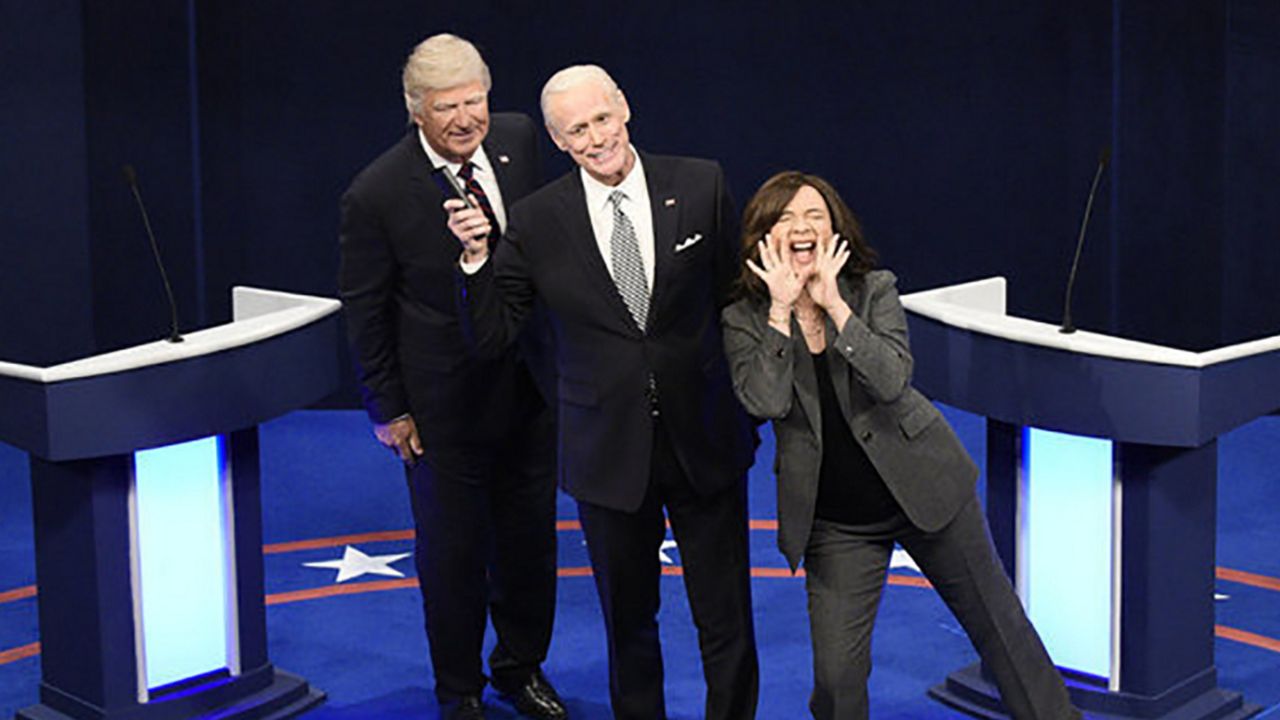 The NBC late-night sketch series on Saturday night jumped into the reenactment of the recent debate between Republican President Donald Trump and Democratic challenger Joe Biden. The series opened its 46th season, returning to the studio this week after the coronavirus pandemic halted production.

Alec Baldwin returned to play Trump before the president’s COVID diagnosis, while Jim Carrey made his feature debut as Biden.

In the sketch, Baldwin’s Trump commandeered the debate in the same fashion as on Tuesday, trying to trip up Biden by interrupting and insulting him. Meanwhile, Carrey’s Biden tried to maintain his anger by breathing into a paper brown bag and talking to himself.

“Look man, I’m a nice guy, but you give anymore guff tonight, I’ll rip your face off like a mad chimp,” Carrey yelled before talking to himself again saying, “The country’s counting on you Joe. Just stand here and look lucid.”

Maya Rudolph made a cameo appearance as Sen. Kamala Harris calling for a WAP (Woman As President) — a nod to the hit song by Megan Thee Stallion and Cardi B — before Carrey’s Biden pulled out a remote control to pause Trump.

The show was hosted by Chris Rock who stepped onstage with a mask before snatching it off to perform his monologue. He opened in front of a live audience, which included about two dozen first responders who all wore masks.

Rock joked about how the coronavirus pandemic has ruined much of 2020. The actor-comedian also sarcastically showed empathy toward Trump being hospitalized after his virus diagnosis.

“President Trump is in the hospital from COVID, and I just want to say that my heart goes out to COVID,” he joked.

Rock offered his thoughts on America needing to “renegotiate their plans” with the government.

“What job do you have for 4 years no matter what? Just show me one job. If you hired a cook, and he was making people vomit every day, do you sit there and say ‘Oh, he’s got a 4-year deal,’” he said. “We just got to vomit for four more years.”

Rock was once part of an “SNL” cast that included Chris Farley, Mike Myers, David Spade and Adam Sandler. Rock spent three years on the show before he left in 1993.

Megan Thee Stallion hit the stage as the musical guest performing her hit single “Savage.” While wearing a black-and-white ensemble, the rapper delivered a message calling for the protection of Black people, in addition to the words “Protect Black Women” flashing on the screen behind her.